By Sophie Law For Mailonline

Torrential downpours across Britain caused flooding on Sunday, with rivers bursting their banks and roads overflowing – as the country gears up for a week of wet and stormy weather from Hurricane Lorenzo.

The Met Office warned the UK could be hit by the remains of the 600-mile-wide hurricane as it brings winds of up to 160mph. It’s the strongest on record to ever travel east in the Atlantic region.

It could bring heavy wind and rain coupled with a blast of cold air from the arctic into next week, with gale force winds of 70mph and chances of sleet in Scotland.

The weather has led to the cancellation of the inaugural Regatta London race on the Thames and the route for the Cycling Road World Championships in Harrogate has had to be changed.

Floods today caused chaos for residents and motorists in parts of England and Scotland as the Met Office issued a yellow weather warning for heavy rain.

Ten beach huts in St Leonards-on-Sea, East Sussex were washed away from the shore by the storms after they battered the coastline.

Downpours overnight caused the river Wye in the Welsh town of Builth Wells in Powys to burst its banks on Sunday, while flooding in Abderdeenshire caused roads to be closed after a bridge washed away. 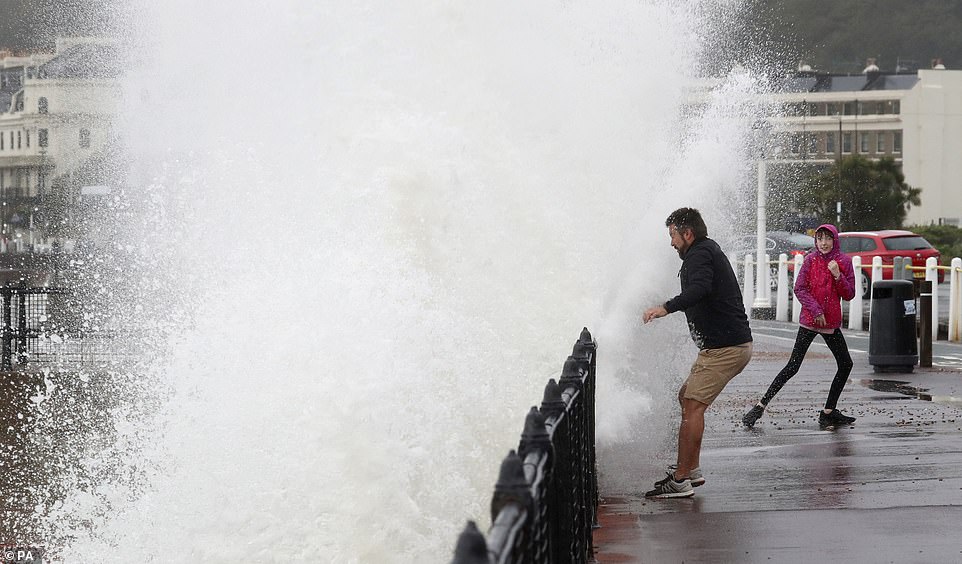 Waves crash over the promenade in Dover, Kent, as forecasters warn that up to 70mm of rain could fall over the highest parts of the country today 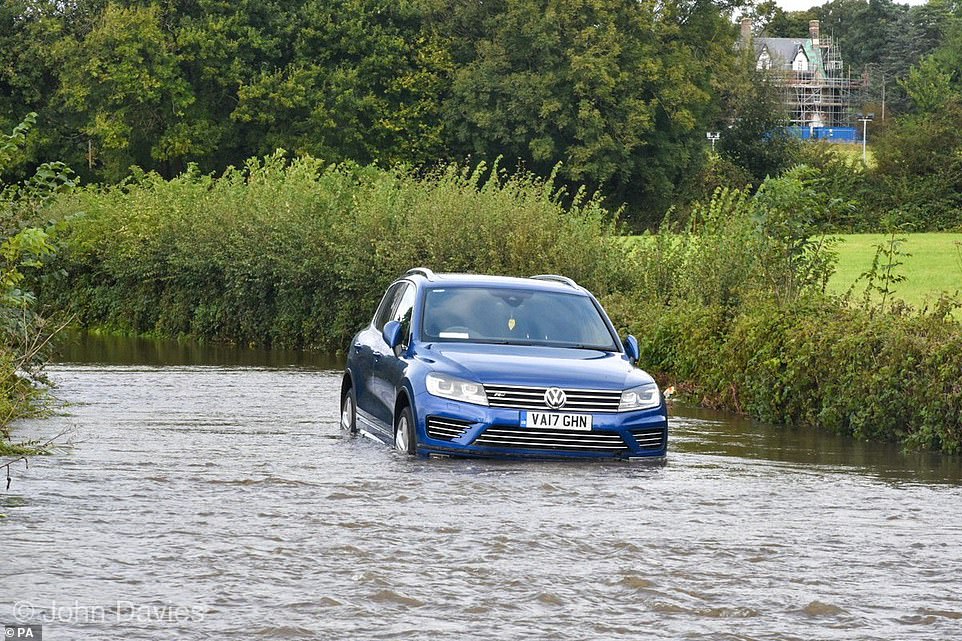 This car was seen abandoned on a flooded road in Peterson-Super-Ely, which was just one area of the country to be battered by heavy rain yesterday 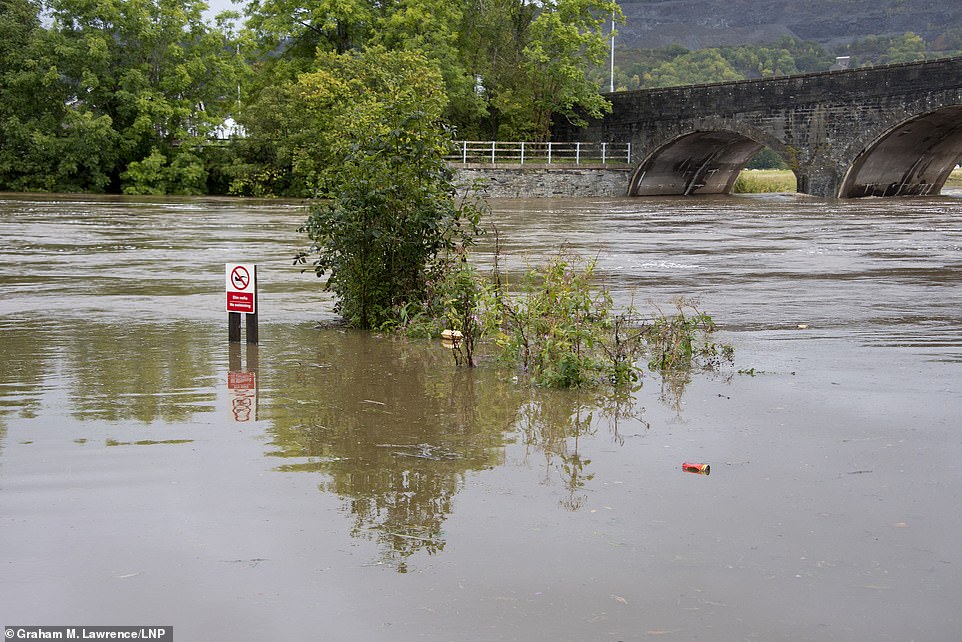 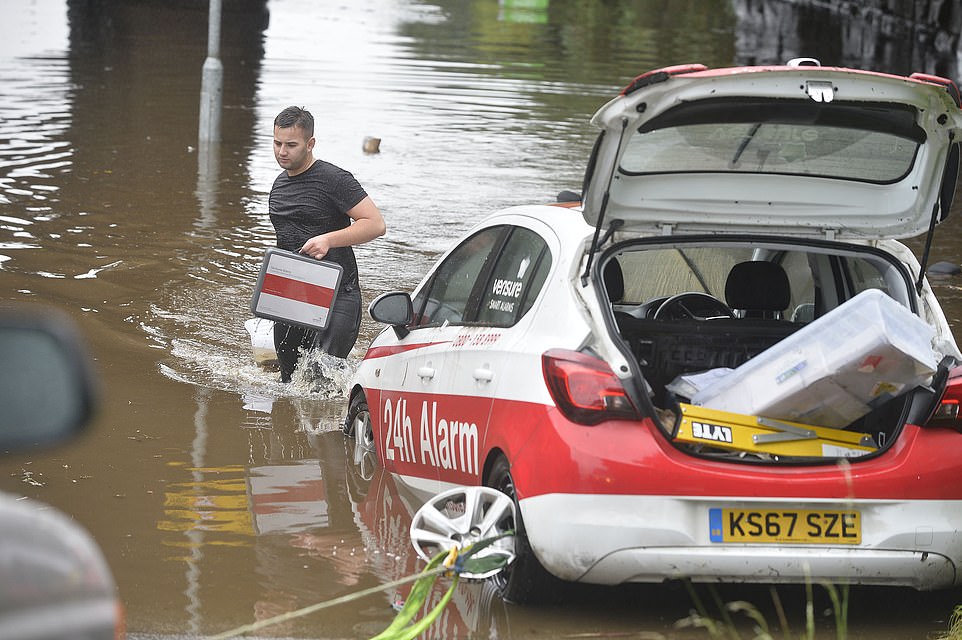 A driver wades through the water to collect belongings after the River Calder in Mirfield, West Yorkshire, burst its banks A flooded road on Weymouth harbour. Dorset was battered by heavy rain and strong winds today. The county was hit by bands of heavy rain through the night and more are set to sweep through today Following overnight torrential rain, roads in the North West have flooded in many places, forcing cars to battle through the water 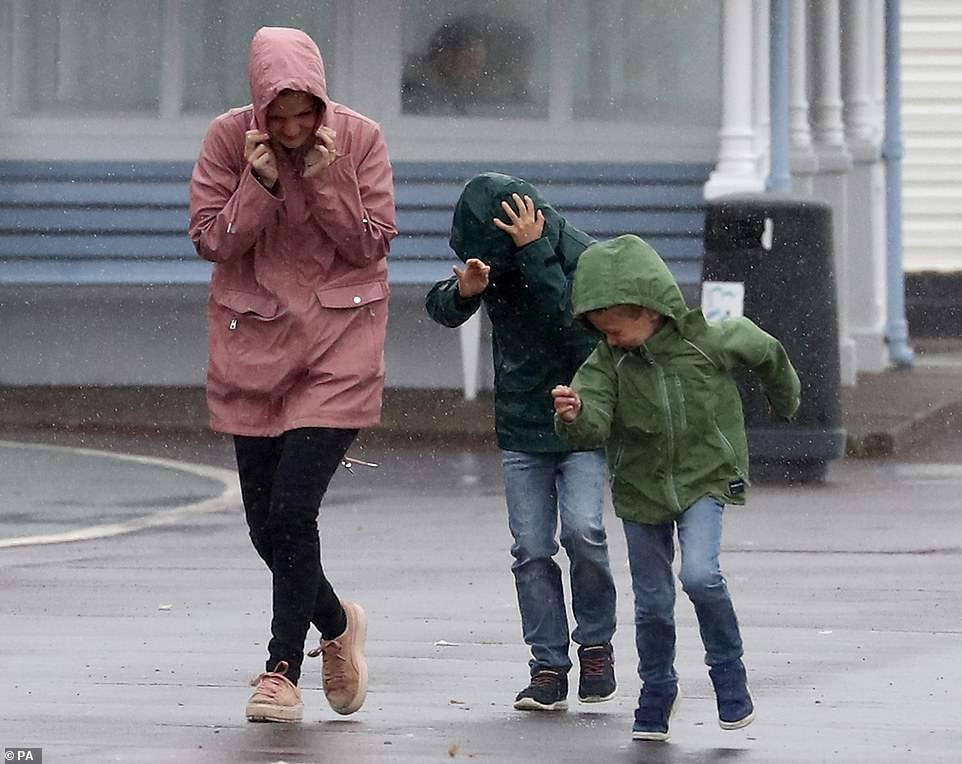 People wrap up against the elements on the promenade in Dover, Kent, amid the torrential rain and high winds 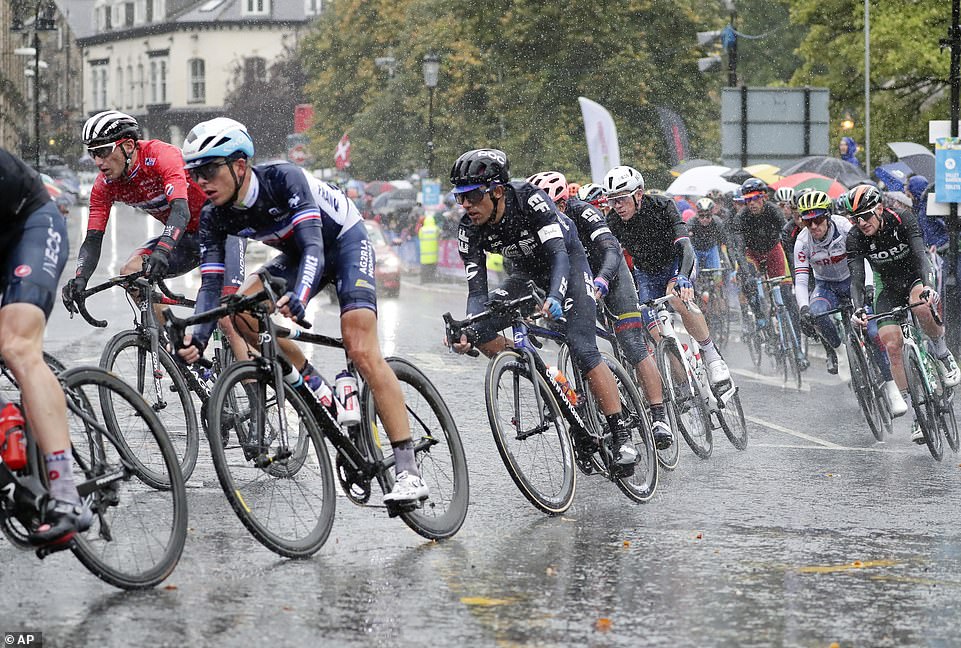 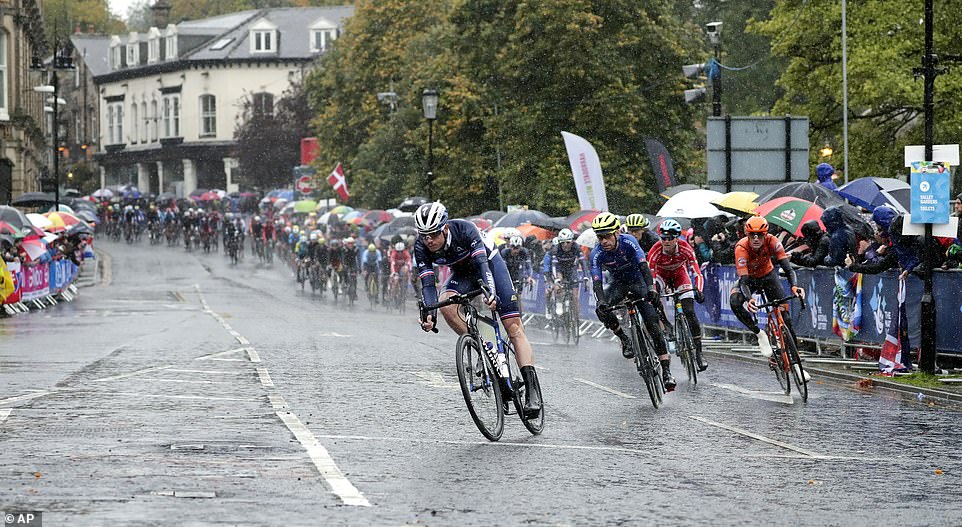 A main road on Weymouth harbour in Dorset was battered by heavy rain and strong winds, which likely caused disruption to travel as weather warnings were put in place along the Dorset coast.

Strong winds and ‘stormy weather’ also led to the cancellation of the inaugural Regatta London race along the River Thames.

The event, which was due to take place on Sunday, would have seen more than 1,000 rowers, kayakers and paddle boarders race along the river through central London.

And huts thought to be owned by Hastings Borough Council were washed into the sea as high tides battered sea defences in East Sussex.

Bystanders took pictures and film of the candy-coloured sheds being lifted up and pulled further down the beach.

And some locals said it was mad for the council to have stationed them there with no protection.

Jan Bennett said: ‘They’ll be gone by tomorrow. Trust HBC to put them in a stupid place.’

Toby Stevens said: ‘They take these away in winter, usually in October.’

Mike Lower added: ‘I personally knew this was a bad idea, garden sheds are not suitable to have as beach huts, they’re not strong enough, that’s why on Brighton beach they have bricked versions*’

Norney Duck said: ‘Should never have been put there in the first place, typical of this council.’

Local Cheryl Fletcher, 46, took pictures of the damage as the huts filled with water.

She said: ‘They were all being moved around.

‘The sea was coming right up to the sea wall. I didn’t see them carted away but they moved a few feet.

‘There will be a lot of damage, the sea was spilling into them and they were all being battered.’

The Environment Agency currently has 28 localised flood warnings in place for England in counties including Cornwall, Devon, Somerset, Yorkshire, Hampshire, Sussex and Lincolnshire. 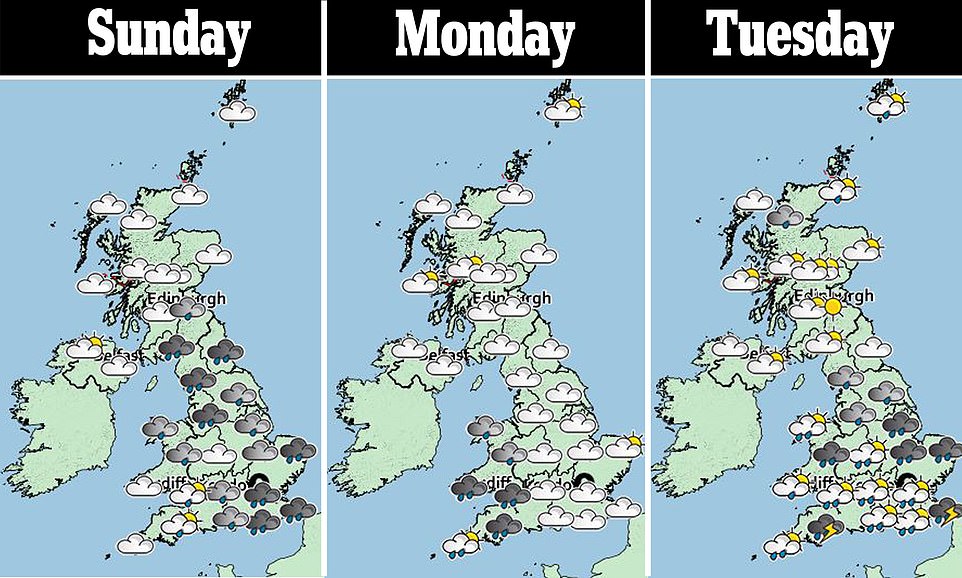 A ferry was pictured being lashed by huge waves as it arrived at the port of Dover, in Kent, during the bad weather today 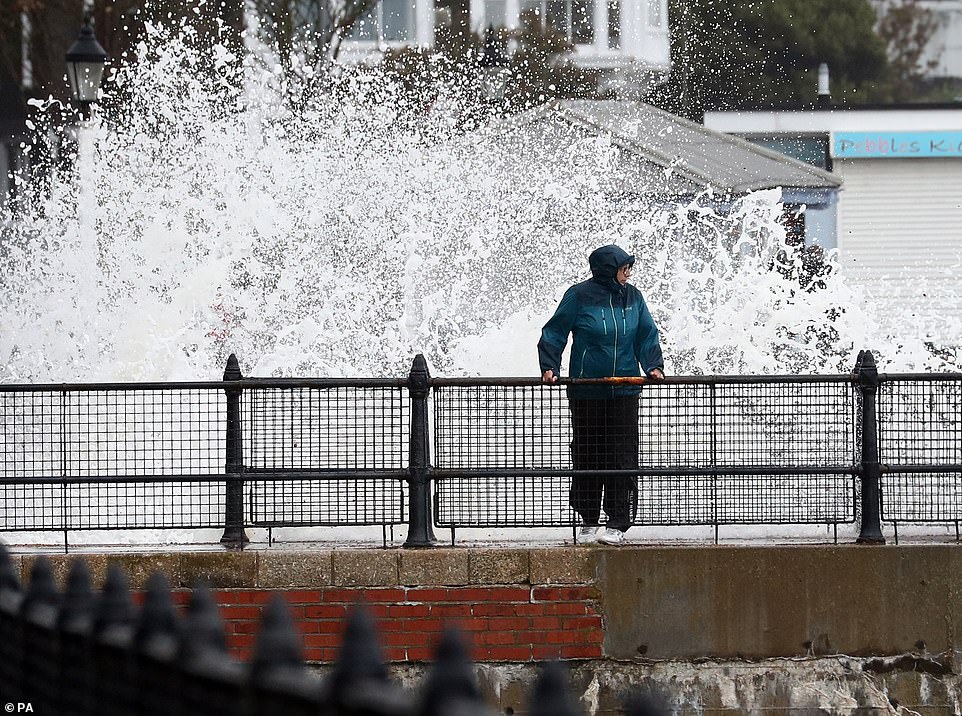 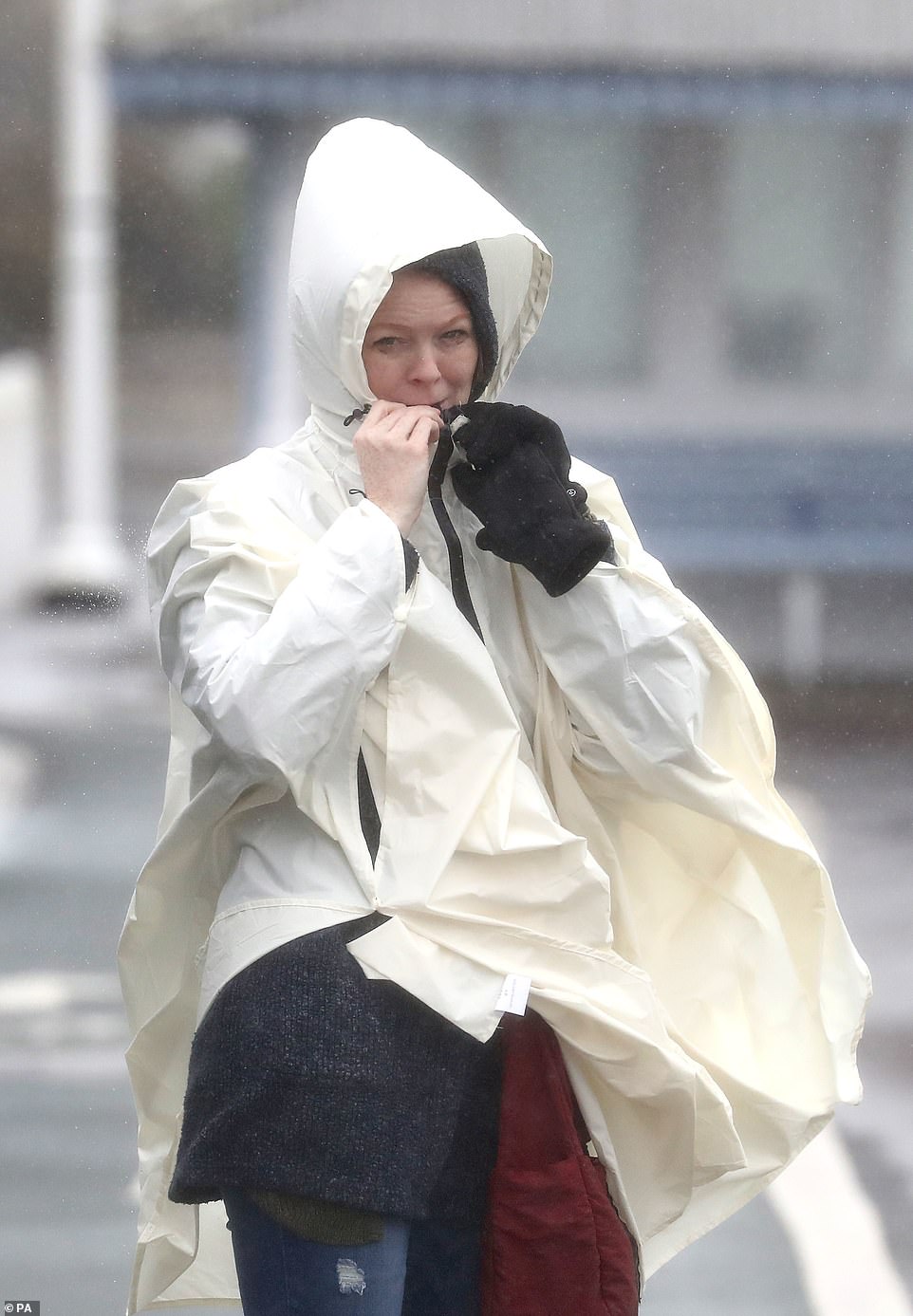 Time to wrap up! One woman braves the elements in Dover after forecasters warned that up to 70mm of rain could fall over the highest parts of the country Suited a booted! This Land Rover appeared to be the kind of vehicle which would have no trouble ploughing through flood water in Bolton today 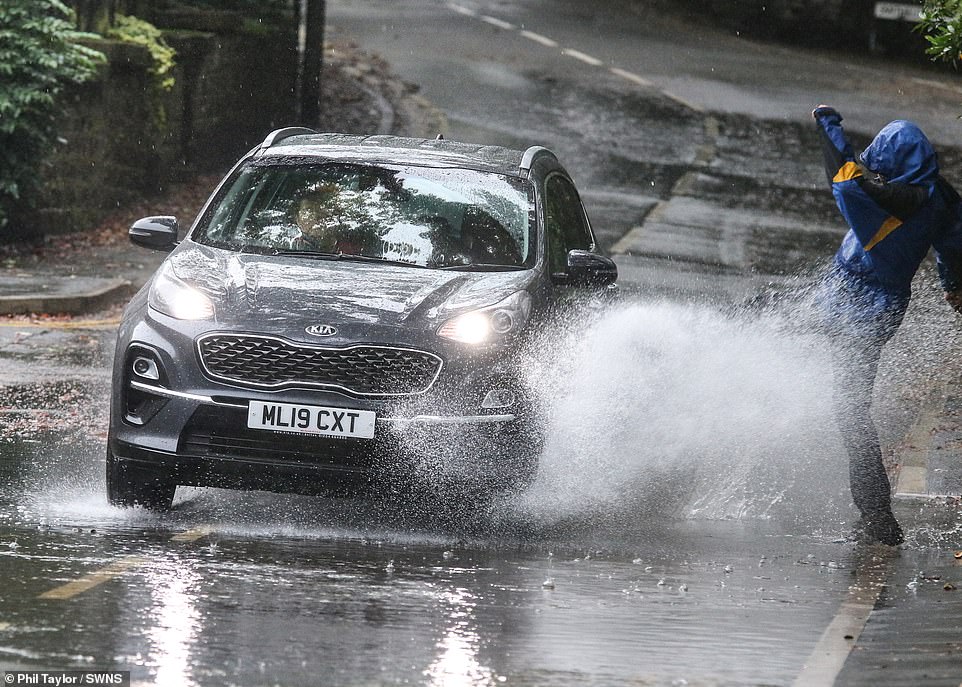 In Mopss Lane in Barrow Bridge in Bolton, a dog walker got a soaking as a driver sped through flood water

There are two warnings in place in Monmouthshire in Wales plus 175 alerts for possible flooding across the country.

Some areas could see as much as 70mm of rain, equivalent to three weeks of the September average of 96mm.

In Twickenham, a man was spotted canoeing down a road after it completely flooded following hours of torrential rain.

The video was shot in Peterson-super-Ely in Vale of Glamorgan, Wales, yesterday.

Met Office Meteorologist Alex Burkhill said: ‘There’s a lot of uncertainty about where the hurricane will hit – it could either go over Iceland or hit France.

‘If it hits the UK, It will be a very wet and windy spell indeed.

‘There is will be a yellow weather warning issued on Sunday with winds of up to 70mph and a very wet and windy start to the week’.

Police forces in England and Wales have warned drivers to take care on slippery and potentially treacherous roads, and rail passengers are advised to check their route for delays before travelling. 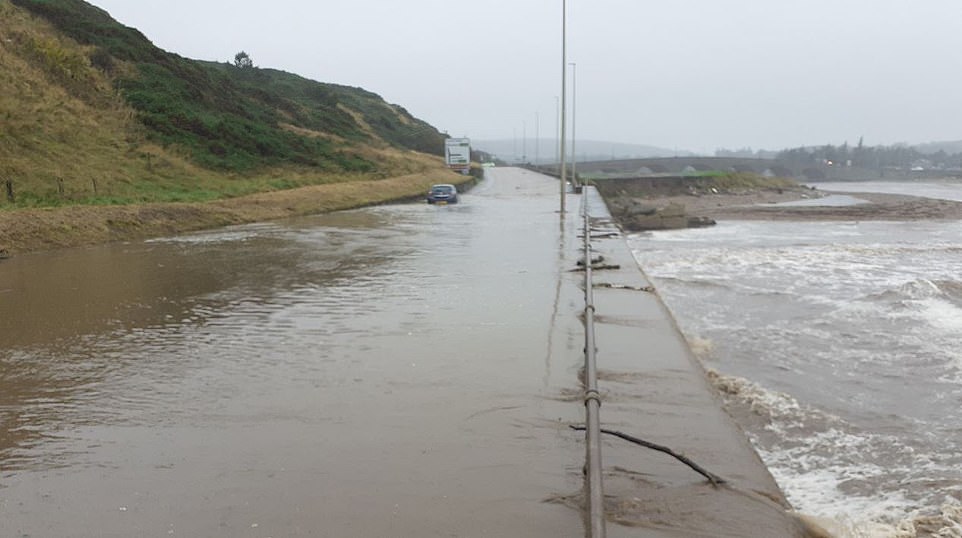 Banff Bridge in Aberdeenshire was closed after it became severely flooded on Saturday, before it was reopened on Sunday 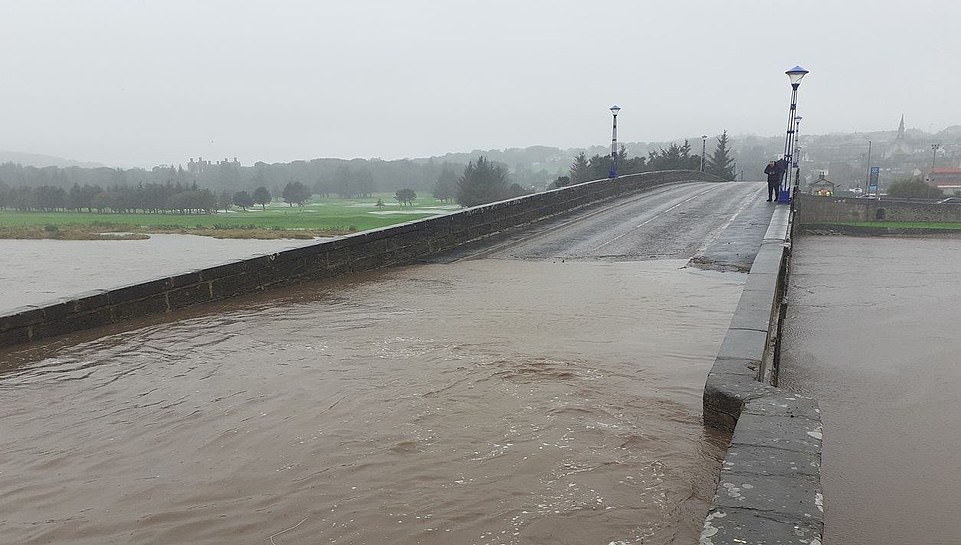 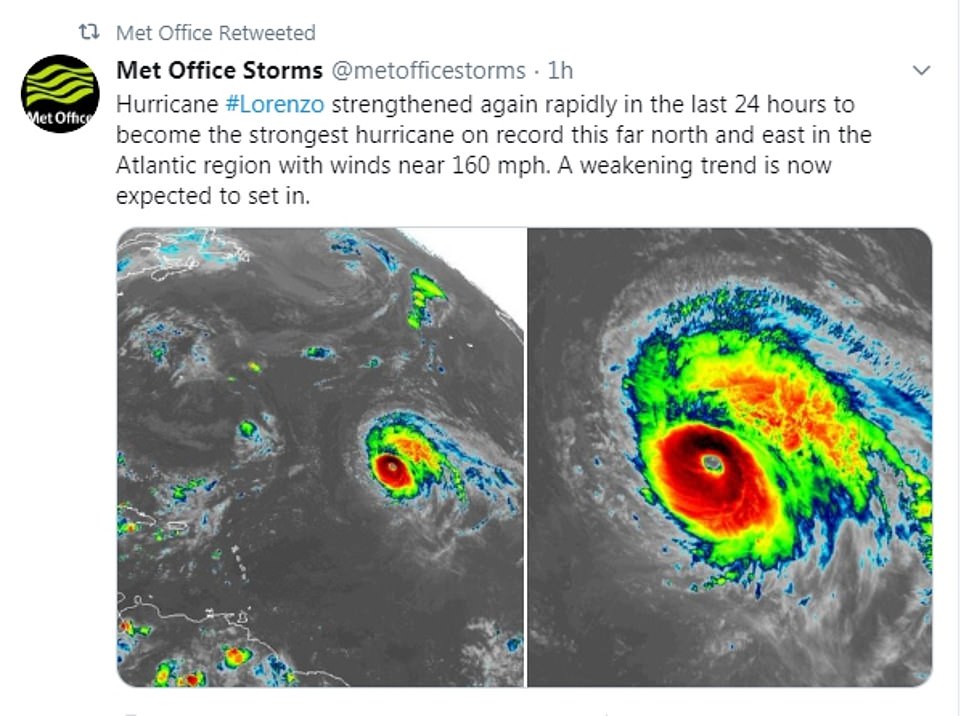 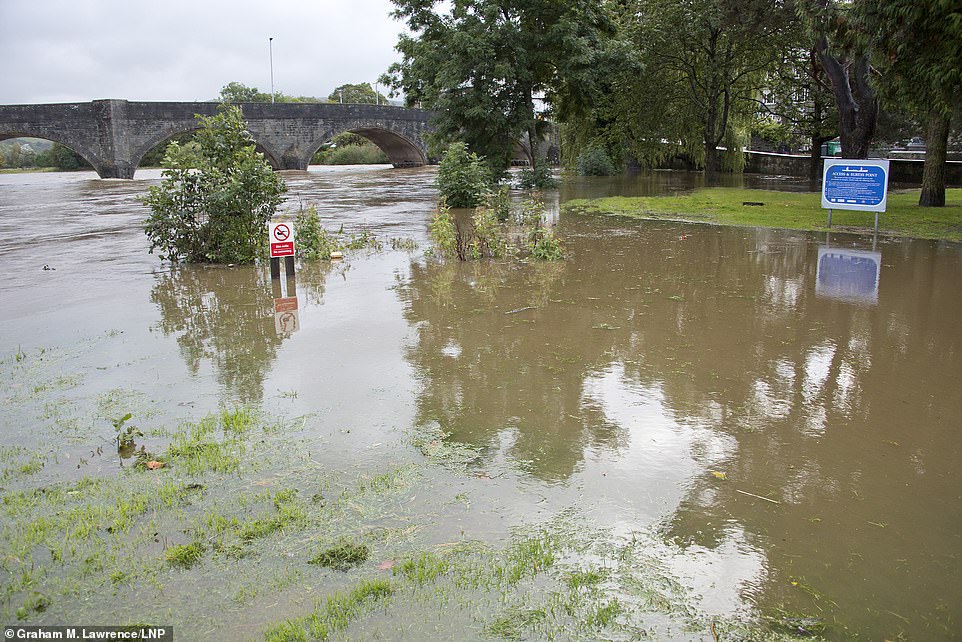 The river in Builth Wells in Powys burst its banks today. Some areas could see as much as 70mm of rain, equivalent to three weeks of the September average of 96mm

Showers are expected across England and Wales today before moving slowly eastward and is not expected to clear until the evening.

Monday will see more rain but fresh and dry conditions are expected on Tuesday until frost hits in the evening, bringing very wet and windy weather from Wednesday onward.

Met Office Meteorologist Alex Burkhill said: ‘Lorenzo will likely hit at the end of the week, it won’t be a hurricane by the time it hits the UK but if it does hit, it will be very wet and windy and will likely hit the west.’ A week of heavy wind and rain is expected coupled with a blast of cold air from the arctic, bringing gale force winds of 70mph and chances of sleet in Scotland

It comes after heavy rain and strong winds lead to travel disruption on Saturday, with the Met Office issuing a yellow weather warning for parts of England and Wales.

The bad weather follows on from an unsettled Friday, which saw a water spout form near the Isle of Scalpay in the Outer Hebrides, off the west coast of Scotland.

The Met Office said areas such as Devon and Cornwall saw coastal gales of up to 50mph, while between 30mm and 40mm is expected to fall within the warning area over the weekend.

Cities including Leeds, Manchester, Sheffield, Liverpool, Bangor, Swansea and Cardiff are covered by the weather warning.

The river flooding grassland in Builth. Showers are expected across England and Wales today moving slowly eastward, which is not expected to clear until the evening 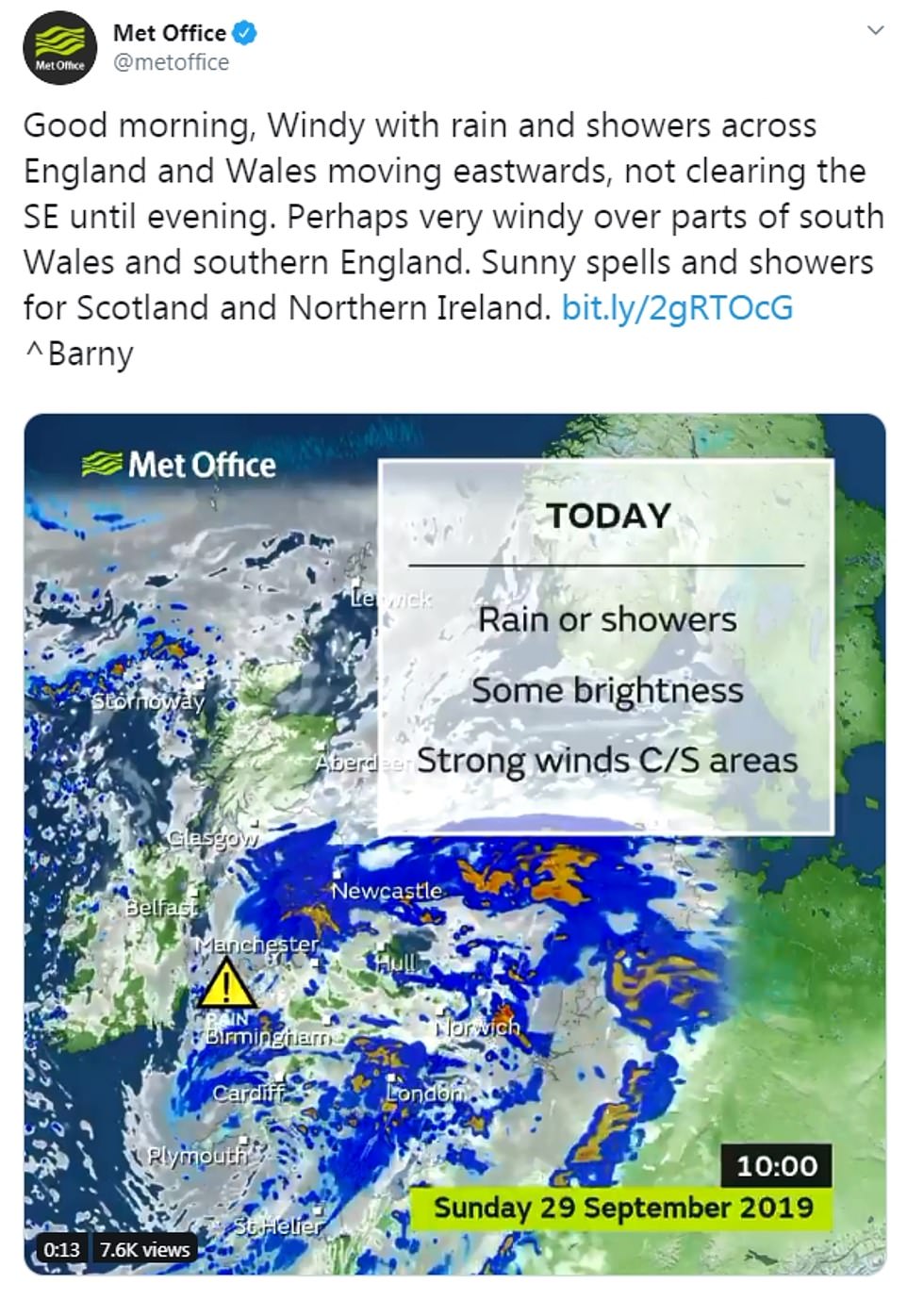 It comes after Heavy rain and strong winds lead to travel disruption this weekend, with the Met Office issuing a yellow weather warning for parts of England and Wales