By John Stevens Deputy Political Editor For The Daily Mail

Police last night launched an investigation into a banner calling for the deaths of Conservatives near the party’s conference.

Two effigies in nooses were hung beneath the message, which was draped across a bridge in Salford.

She tweeted a picture with: ‘Never have I felt more apprehensive than seeing this in my morning run pre-Conference. Does this classify as death/terrorist threat? Utterly vile.’ 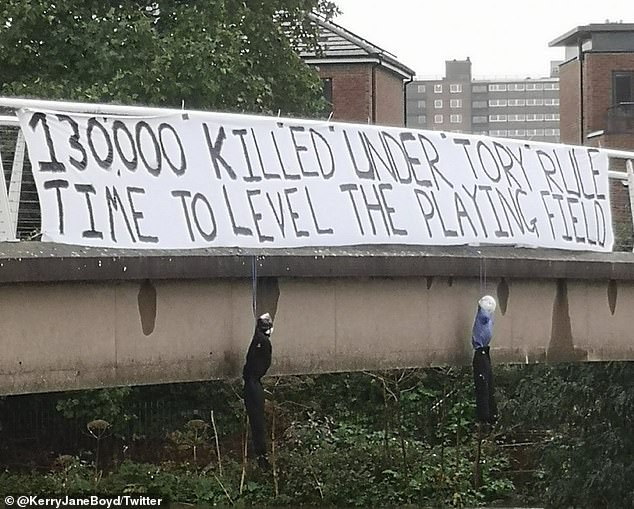 Andy Burnham, the Labour Mayor of Greater Manchester, posted: ‘It is completely unacceptable and is being removed.’

Labour MP Yvette Cooper, the chairman of the home affairs select committee, tweeted: ‘This is awful. We cannot let politics descend into threats or incitement.’

Health Secretary Matt Hancock last night denounced the banner as ‘totally outrageous’ as he spoke at a fringe event at the party’s conference.

He added: ‘What is not acceptable is threats of physical violence against public figures and people in public debate. Frankly we see far more of that coming from the other side.’

A Greater Manchester Police spokesman said: ‘Police are investigating after a banner was displayed on a bridge over the River Irwell during the Conservative Party Conference.’ 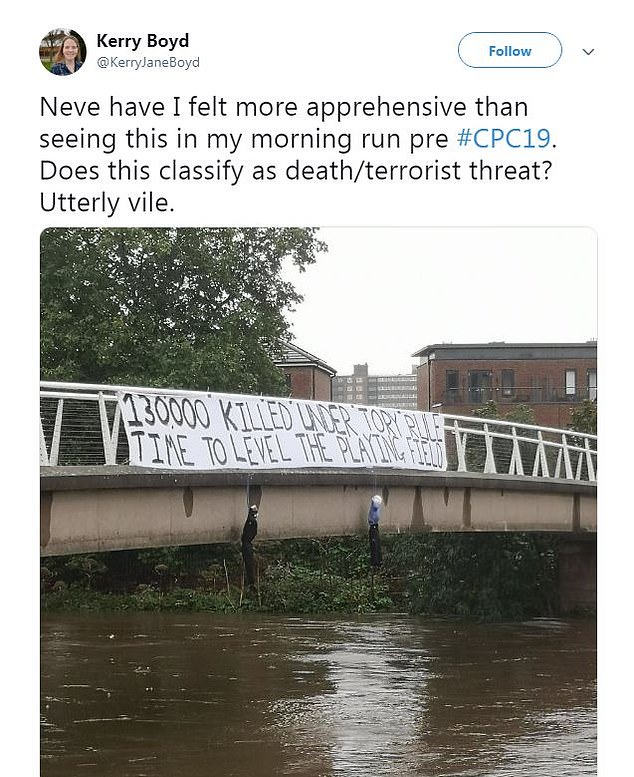 Andy Burnham, the Labour Mayor of Greater Manchester, posted: ‘It is completely unacceptable and is being removed’

Earlier this year, a study by the Left-leaning Institute for Public Policy Research estimated there were 130,000 preventable deaths in England between 2012 and 2017 caused by austerity.

Hundreds of protesters yesterday took to the streets of Manchester as the Conservative conference got under way.

A giant Boris Johnson blimp was inflated ahead of a Reject Brexit – Defend Our Democracy event.

The six-metre tall inflatable depicted the Prime Minister dressed in blue shorts with red hearts and the word ‘Nigel’ on, and a T-shirt showing a £350million bus.

Demonstrators also gathered for a Shut Down the Tories march through the city.

Shadow education secretary Angela Rayner was among those heading the march, holding a banner saying ‘No More Austerity’. Others brandished placards saying ‘Tories Out’ and ‘Defy Tory Rule’.

Marchers banged drums, blew whistles and chanted slogans including ‘Boris Johnson, shame on you’ as they made their way through the city, pausing as they passed near Manchester Central, where the conference is being held.

Roads through the city were closed by police as the march took place and mounted officers led the demonstrators.