By Martin Robinson, Chief Reporter and Vivek Chaudhary For Mailonline

The US spy’s wife accused of knocking down and killing Harry Dunn while driving on the wrong side of the road has been interviewed by British police who flew across the Atlantic to question her, it was revealed today.

Anne Sacoolas, who has been hiding on a base in America, has met with detectives from Northamptonshire who have handed a file to the Crown Prosecution Service.

Sacoolas is believed to have been driving on the wrong side of the road when she hit 19-year-old Mr Dunn’s motorbike outside RAF Croughton on August 27.

The 42-year-old, a wife of a US diplomat, was granted diplomatic immunity after the case, which has since been disputed by the lawyers acting on behalf of the teenager’s family.

Superintendent Sarah Johnson said: ‘We can confirm that we have completed an interview of the suspect in connection with the death of Harry Dunn, the details of which will be provided to the CPS for consideration alongside the rest of the evidential file already submitted.’ 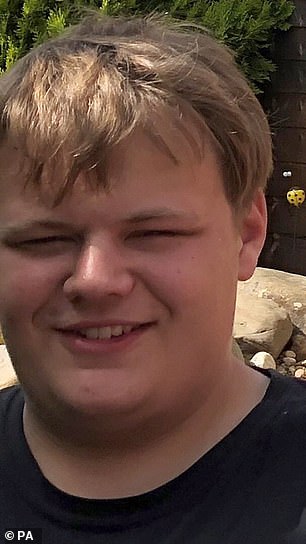 Anne Sacoolas, who has been hiding on a base in America, has met with detectives from Northamptonshire in the US about the death of Harry Dunn who have handed a file to the Crown Prosecution Service 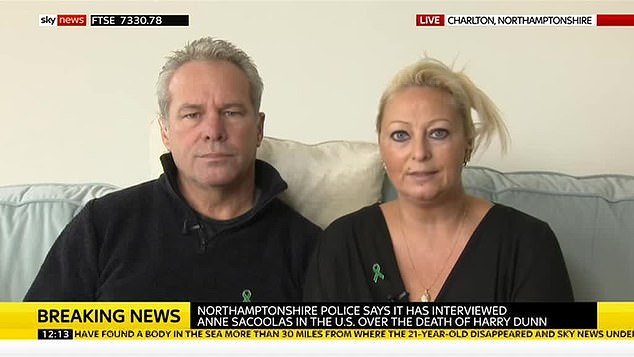 Harry’s mother Charlotte, pictured today with her partner Bruce, says that police should not have gone over to the US to speak to Sacoolas – because she should be forced back to the UK

It came as Harry Dunn’s parents demanded their local police chief resigns immediately after he called their decision to sue Donald Trump and Anne Sacoolas ‘sad and predictable’.

Harry’s mother Charlotte told Sky News:  ‘We’ve heard absolutely nothing since apart from an email yesterday to say that they had finally, after a week and a day, been over there to interview her and they’ve put the case to the CPS.

‘We don’t really understand if I’m completely honest why they, the police, flew to the States to see her, as per her request.

‘Why should our UK taxpayers be funding the police to go to the States when ideally, really, she should have been coming back here?’.

Radd Seiger, the Dunn family spokesman criticised Northamptonshire Police, and told MailOnline: ‘We received an email telling us that a person of interest had been interviewed and that the details of this would be passed on to the CPS.

‘This email is about as useful as chocolate tea pot. It does not provide us with any clarity, a timeline of where we go from here or confirm that Anne Sacoolas has been interviewed. It leaves us with more questions than answers.

‘In all my years as a lawyer, I have never seen a family so badly treated by the police’/

Northamptonshire Police Chief Constable Nick Adderley made the ‘sad and predictable’ comment in a tweet deleted on Monday and has now apologised if his words were ‘misconstrued or misinterpreted’. 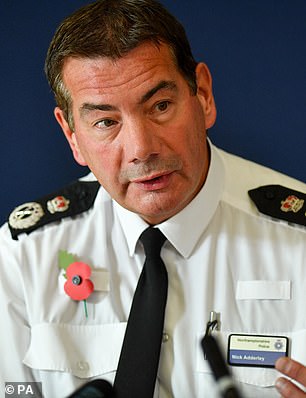 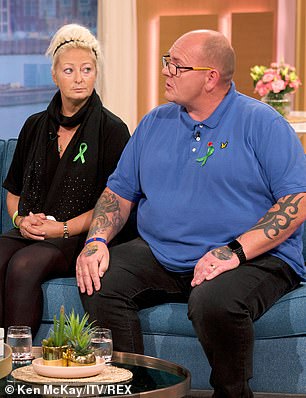 Mr Adderley then tweeted: ‘How sad and predictable’ reacting to a breaking news alert announcing the litigation, before deleting it within ten minutes

Mr Adderley’s force is in charge of the British investigation into Harry’s death on August 27 where Sacoolas allegedly ran him down while she was driving on the wrong side of the road.

The crash was outside the US spy base where her husband worked in Britain – but the family fled to America claiming diplomatic immunity before Northamptonshire Police could arrest her.

Harry’s parents Charlotte Charles and Tim Dunn are to sue Sacoolas in American courts for allegedly killing him and Donald Trump’s administration for ‘an attempt to cover it up’.

Mr Adderley then tweeted: ‘How sad and predictable’ reacting to a breaking news alert announcing the litigation, before deleting it.

Harry’s bereft parents have demanded the police chief steps down.

They said: ‘We couldn’t quite believe our eyes when we saw it. It is totally outrageous and absurd for him to take sides and it is clear now that he is just against us. We are so angry at him.

‘He cannot continue in his job and we are calling on him to resign immediately for the good of our case and for the good of the people of Northamptonshire who should be able to rely on their head of police for impartiality and fairness.

‘We have said numerous times that we have felt totally unsupported by Northants Police and not been kept updated on progress of the case in accordance with our rights under the victims’ code.’

The family’s spokesman Radd Seiger, who is in New York liaising with lawyers, added: ‘Mr Adderley has displayed a staggering degree of unprofessionalism with this tweet such that he no longer commands the confidence of the family.

‘This is simply the straw that broke the camel’s back, coming as it does on the back of apparent misconduct and/or incompetence in the handling of this investigation and their egregious breaches of the victims code in not supporting the family or keeping them informed. It is with a heavy heart that Harry Dunn’s family feel that Mr Adderley should now do the honourable thing and resign’. 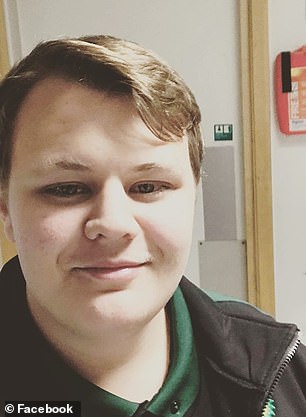 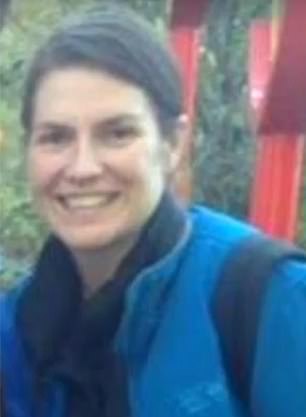 Harry Dunn, 19, who died after his motorbike was involved in a crash on August 27. American Anne Sacoolas has been named as the driver but fled claiming diplomatic immunity

Charlotte Charles and Tim Dunn are about to start proceedings in America and will seek damages after 19-year-old Harry was knocked down and killed by the US spy’s wife as she drove on the wrong side of the road in Britain.

Mr Adderley says that the tweet, which was online for ten minutes, has been misconstrued and was meant to be sympathetic.

He told Sky News in a statement: ‘The tweet was in reference to the profound sadness at the loss of Harry Dunn, that the spokesperson for the family has been absolutely clear on the next steps in fighting for justice for Harry and that the only recourse to justice that they feel they have available to them at the moment is through the US civil court system.

‘I deleted it with a view to re-writing it with more context but was called away to deal with something else.

‘I meant no offence by my tweet and apologise if it has been in any way misconstrued or misinterpreted’.

The former couple met Mr Trump in the White House two weeks ago where he held Ms Charles’ hand and promised a resolution.

But their spokesman Radd Seiger says they have heard nothing from the US President and will sue because Sacoolas has not been returned to Britain. 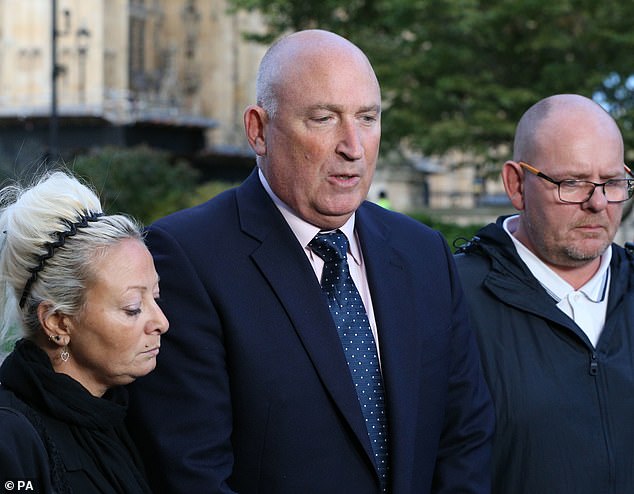 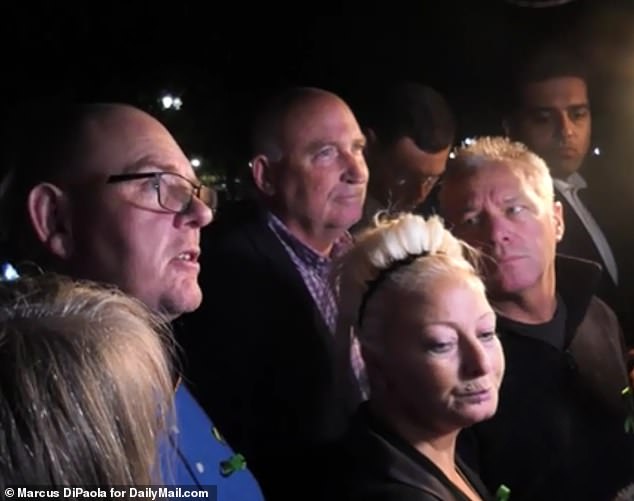 The case against the Trump administration centres on their handling of events following Harry’s death, which the Dunn’s American lawyers claim, amounted to a breach of laws on diplomatic immunity and an ensuing cover up.

Mr Seiger said: ‘Our US lawyers and the Dunn family believe that we have a very strong case on both fronts. We are determined to get to the bottom of what happened and get justice for Harry and his family’.

Harry, 19, was killed when his motorbike collided with a car driven by Anne Sacoolas outside RAF Croughton in Northamptonshire in August.

Mrs Sacoolas, whose husband worked at the US base, used his diplomatic immunity to return to the US without facing legal proceedings.

Harry’s parents have accused the FCO of acting ‘unlawfully’ by allowing Mrs Sacoolas to leave Britain.

They said their son ‘wouldn’t be happy’ if they ‘just gave up’ and are determined to continue their fight.

It is understood the Dunn family has chosen human rights barrister Geoffrey Robertson, who has previously defended boxer Mike Tyson and former Brazilian president Lula da Silva, to be on their legal team.

They say they are referring the incident to watchdog the Independent Office for Police Conduct.