American actor George Clooney has said he hopes the Duchess of Sussex will receive ‘kinder’ treatment’ now that she had become a mother.

The 58-year-old, who attended the wedding of Prince Harry and Meghan Markle with his wife Amal, had previously complained that Meghan had been ‘pursued and vilified’ and had compared her struggles to that of the late Princess of Wales.

Clooney, who lives close to the royal couple’s new home in Windsor, said he thought that them becoming parents would ‘intensify’ the scrutiny.

He said: ‘It’s never about the media following you around, because that, in part, if you’re a royal, that’s part of what you have to do.

‘It’s the other versions of it – going to interview people’s parents, that kind of stuff.’

The star, who has denied he will be godfather to baby Archie, said it starts to ‘step into a really dark place’.

‘I think people should be a little kinder. She’s a young woman who just had a baby.’

The Clooneys have previously holidayed with the Sussexes in Italy, with Amal Clooney having also attended Meghan’s luxury baby shower. 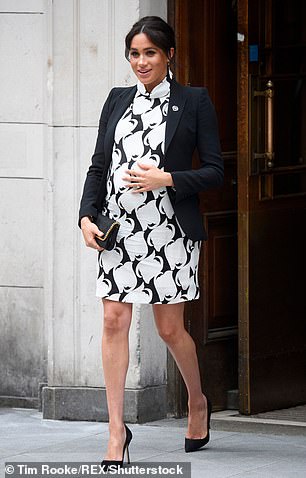 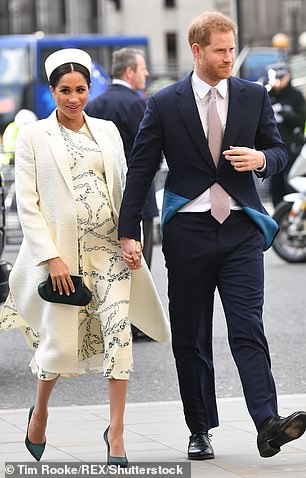 The star has denied he will be godfather to baby Archie. He added: ‘I think people should be a little kinder. She’s a young woman who just had a baby’

Hollywood star Clooney also joked to Entertainment Tonight about sharing a birthday with the young royal.

‘I was a little irritated because that kid really is stealing my thunder!,’ he said.

The actor gushed about his international human rights lawyer wife, following the release of two Reuters journalists in Burma after they were imprisoned over reporting on security forces’ abuses of Rohingya Muslims.

‘My wife spent the last year, every day… working, as hard as you could work, behind the scenes, to get these guys out,’ the father of twins said.

‘And last night for my birthday, at my birthday dinner, those two men (Wa Lone and Kyaw Soe Oo) walked out. And I have to tell you, I couldn’t be more proud of my wife,’ he told the Associated Press.

The six-episode mini-series will air on Channel 4 in the UK.