What will Kate and Wills say? How Harry and Meghan named their son Archie months after Prince George revealed it was his secret nickname

By Chris Dyer and Jessica Rach For Mailonline

On Wednesday the Duke and Duchess of Sussex revealed they had named their firstborn son Archie Harrison Mountbatten-Windsor.

Harry, 34, and Meghan, 37, announced the name to the Sussex Royal Instagram account, along with a sweet picture of the two-day-old baby with Doria Ragland, the Queen and Prince Philip.

The choice of name comes just months after Harry’s nephew Prince George, 5, made the surprising revelation to a passerby that his nickname is ‘Archie’.

In January Prince George revealed his nickname is ‘Archie’ when he started chatting to a dogwalker.

The young prince was walking with his grandmother, Carole Middleton, near her home in Berkshire, when he struck up a conversation with a stranger.

The five-year-old started talking to the woman while stroking her dog after playing with his younger sister, Charlotte, in a stream.

The woman was told not to take pictures of the royal children by a police protection officer.

She made small talk with the prince, who is third in line to the throne, when he told her his name was actually Archie. 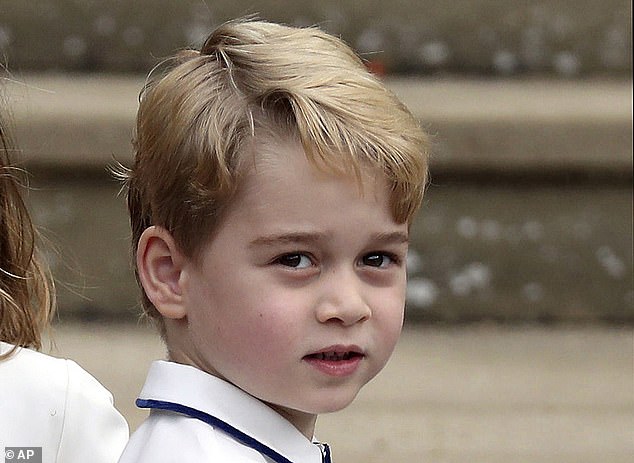 The choice of name comes just months after Harry’s nephew Prince George, 5, made the surprising revelation to a passerby that his nickname is ‘Archie’

The unnamed woman told the Sun: ‘I was asked by a police minder not to take a photo of the children, which I didn’t, but George started stroking my dog.

‘Just to be friendly I engaged in a bit of small talk and I asked George what his name was, even though obviously I knew it.

‘To my astonishment he said ‘I’m called Archie’ with a big smile on his face. I don’t know why he calls himself Archie but kids often play with their names and I think it’s lovely.’

George’s middle names are Alexander and Louis and at school he is known as PG.

Parents Kate and William then started calling him PG Tips or just ‘Tips’ after the brand of tea.

When she was pregnant Kate referred to him as ‘our little grape’.

Harry, 34, and Meghan, 37, announced the name to the Sussex Royal Instagram account, along with a sweet picture of the two-day-old baby with Doria Ragland, the Queen and Prince Philip 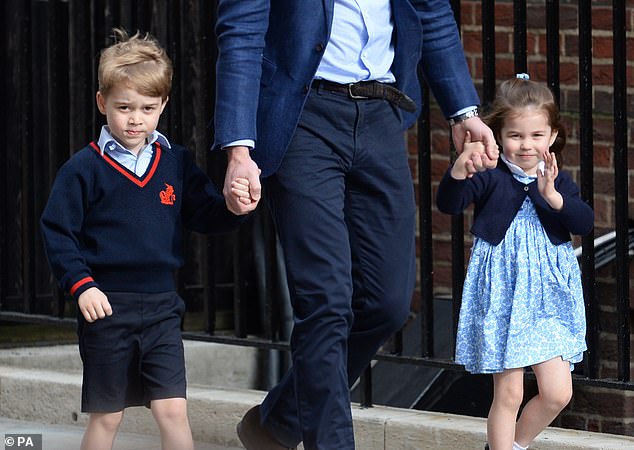 In January Prince George told a woman walking her dog in Berkshire that his nickname is ‘Archie’. Above he is with his sister Charlotte arriving at the Lindo Wing at St Mary’s Hospital after the birth of their younger brother, Prince Louis

Archie is originally a German name with Scottish roots, where it is a shortened version of Archibald.

The royal family often have nicknames for each other and Prince William went by the name ‘Steve’ at university to blend in with his fellow students.

It also emerged that in September Charlotte is to go to the same Battersea school as her older brother.

She has been at Willcocks Nursery in Kensington since last January and will enrol at Thomas’s Battersea, which costs £6,000-a-term.

It was reported last year that the Cambridges may not send their children to ‘traditional’ secondary schools such as Eton. 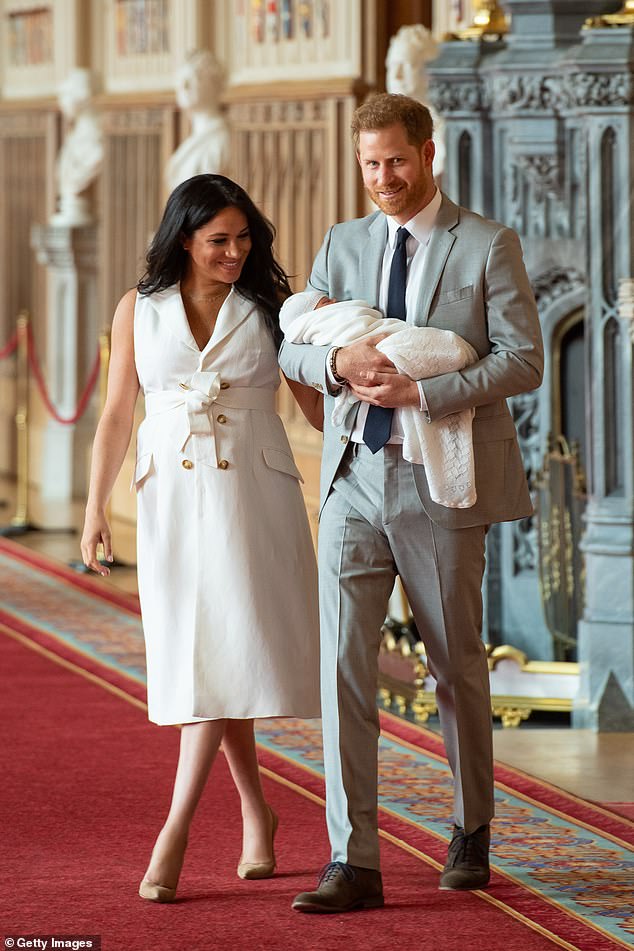 Prince Harry, Duke of Sussex and Meghan, Duchess of Sussex, posed with their newborn son during a photocall in St George’s Hall at Windsor Castle today

Following the news of Baby Sussex’s name on Wednesday, leading bookmaker Coral revealed they had offered a 100/1 on Prince Harry and Meghan Markle naming their baby boy Archie before they revealed the name late this afternoon.

Alexander had been the 4/1 favourite, with Spencer, Arthur and James all well backed with the firm.

‘We only took a handful of bets on Archie so this has to go down as one of the biggest surprises in Royal betting history as it was a 100/1 outsider before the name was revealed,’ said Coral’s John Hill.

Prince Harry and Meghan are odds-on at 4-5 to announce they are having a second child in 2020.

‘It would be no surprise if the Royal couple revealed at some point next year that little Archie will be having a brother or sister,’ added Hill.

The American former actress gave birth to the overdue 7lb 3oz boy on Monday at 5.26am.