So much for paternity leave! Prince Harry returns to work just three days after the birth of his son Archie as he arrives in Holland for Invictus Games event

The Duke of Sussex took a break from parenting today as he travelled to the Netherlands, just three days after the birth of his son Archie.

Prince Harry visited The Hague to launch the one-year countdown to the Invictus Games 2020, after introducing Archie to the world alongside Meghan in an eagerly anticipated photocall on Wednesday.

The duke, who flew into the country on Thursday morning, was met by Princess Margriet and chairman of the games Mart de Kruif as he stepped out of the car in front of well wishers, some of whom had brought gifts.

There were some shouts of congratulations from the crowds as the new father arrived.

The duchess is likely to still have the company of her mother Doria Ragland at their Frogmore Cottage home while Harry is away on the short trip.

Leading parenting expert Suzie Hayman said Harry is likely to find leaving his baby son so soon after his birth ‘agonising’, and said he would feel a ‘pang’ to be leaving his wife and child.

Harry and Meghan announced they had called their baby Archie Harrison Mountbatten-Windsor after the duchess movingly described her son and husband as ‘the two best guys in the world’.

The couple broke with royal convention by not using a title for their baby boy, and have given their firstborn a name familiar to fans of the American Archie comic – featuring a main character who has red hair just like the duke.

The Duke of Sussex took a break from parenting today as he travelled to the Netherlands, just three days after the birth of his son Archie 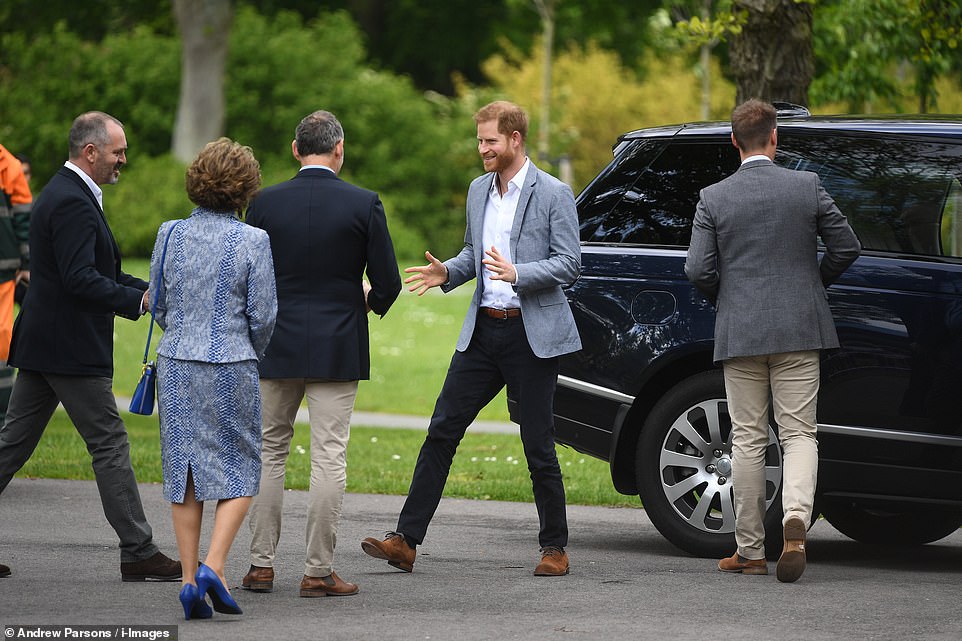 Prince Harry arrives in the Netherlands today to launch the one-year countdown to the Invictus Games 2020, of which he is the creator 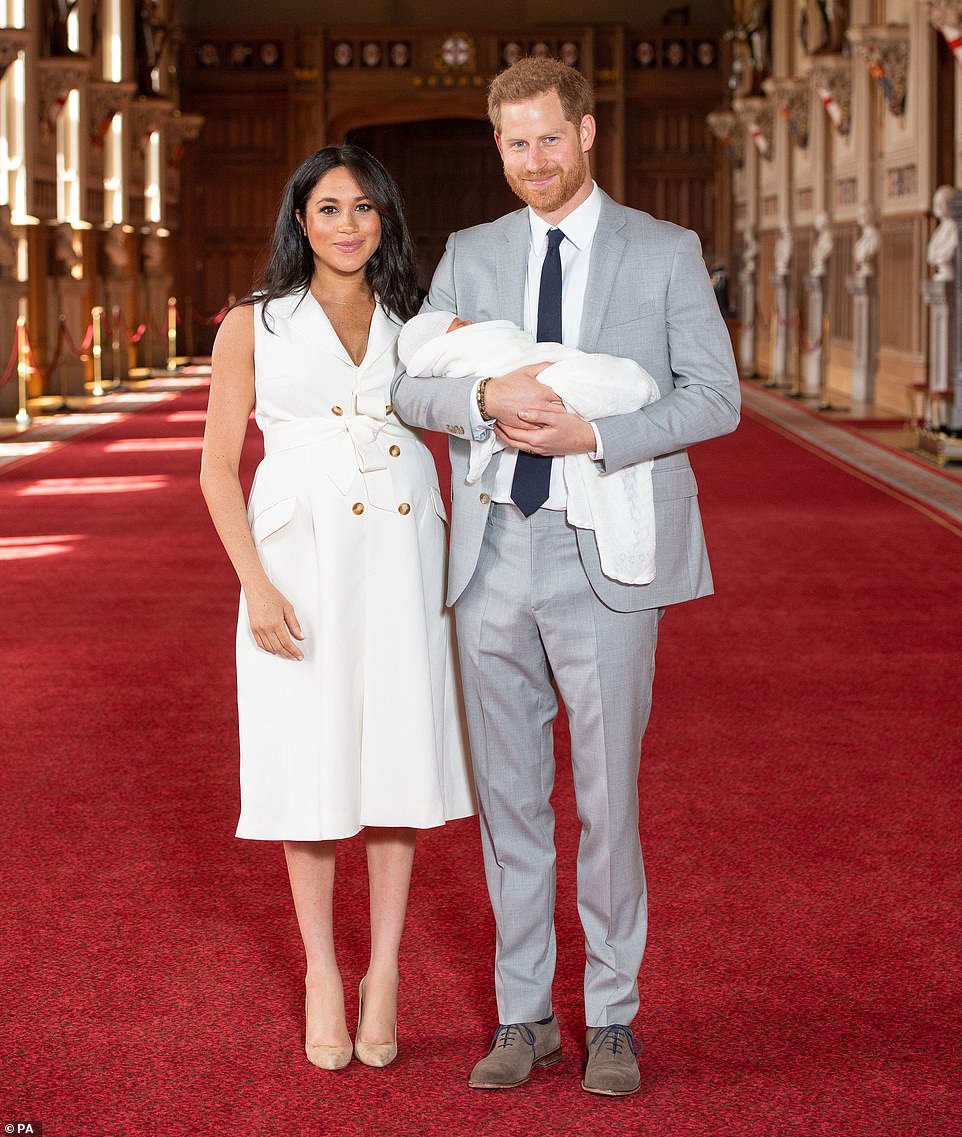 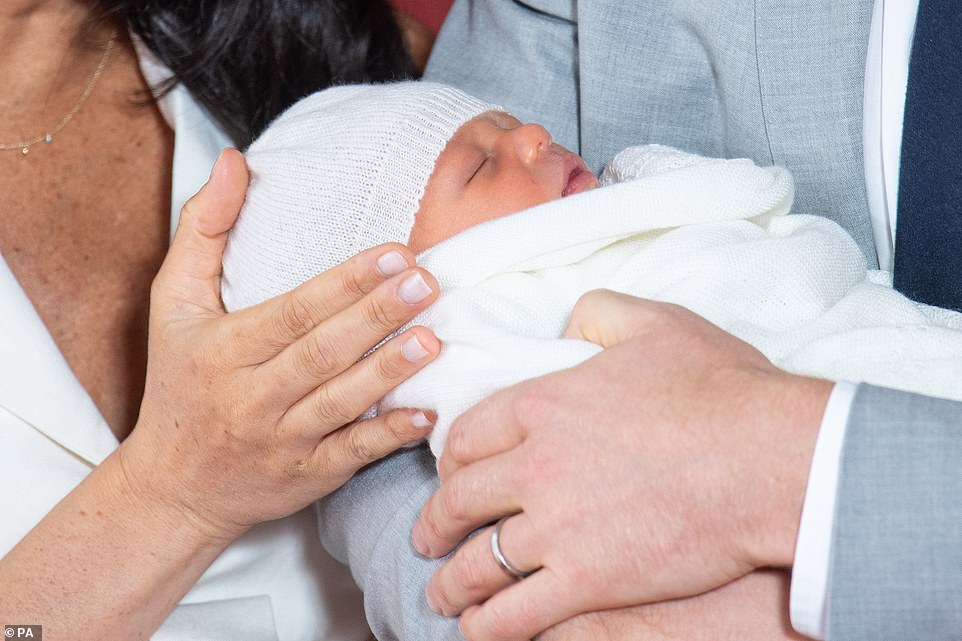 Baby Sussex (pictured) made his very first public appearance at a photocall alongside a thrilled Prince Harry and Meghan in the grounds of Windsor Castle, where the new family have been holed up since the historic birth on Monday

The new parents were pictured showing off baby Archie to the Queen and Duke of Edinburgh, alongside Ms Ragland, at Windsor Castle.

Harry and Meghan’s first born, who is seventh in line to the throne, made his debut with his mother and father at the castle on Wednesday.

The duchess described her son as having the ‘sweetest temperament’, while a delighted duke called him ‘our own little bundle of joy’.

Meghan added: ‘It’s magic, it’s pretty amazing. I have the two best guys in the world so I’m really happy.’

The couple’s son arrived on Monday at 5.26am, weighing 7lb 3oz and his father said, when announcing the birth, the baby’s late arrival had given them longer to decide on a name.

As the first-born son of a duke, Archie could have become Earl of Dumbarton – one of Harry’s subsidiary titles – or have been Lord Archie Mountbatten-Windsor. 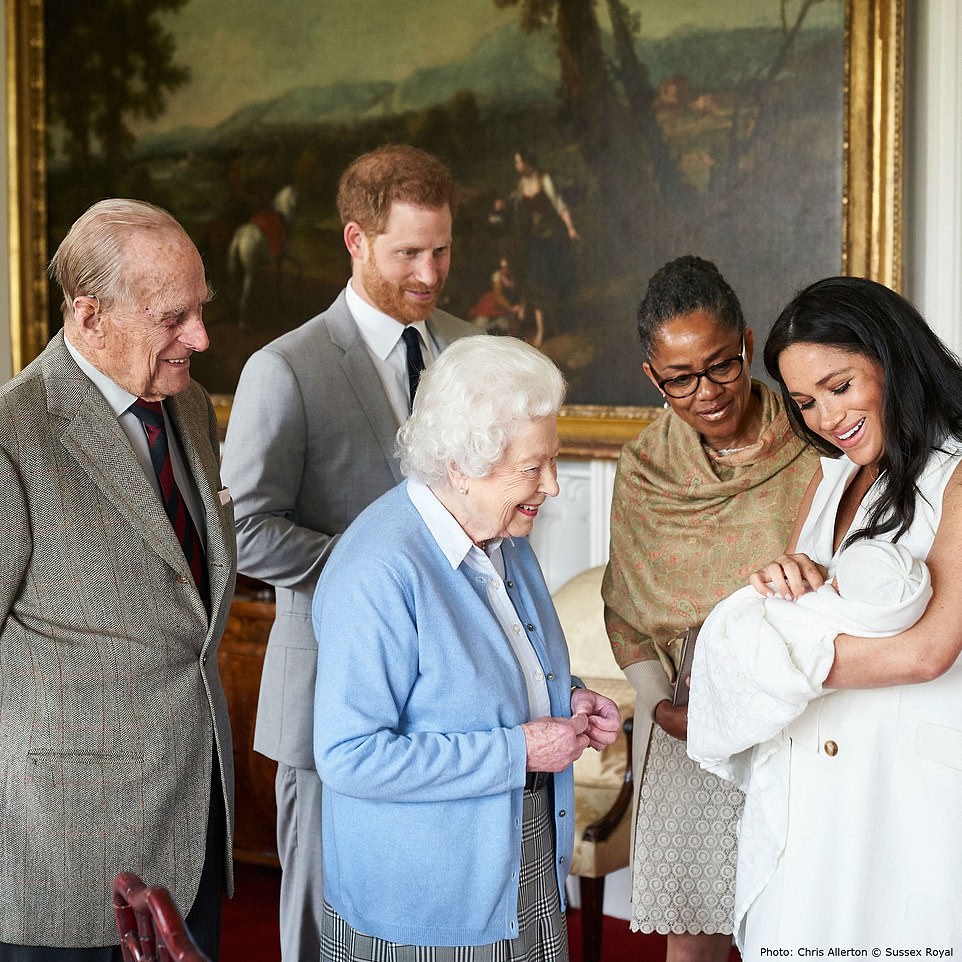 Little Archie Harrison was introduced to the Queen, the Duke of Edinburgh, and Meghan’s mother Doria by his proud parents 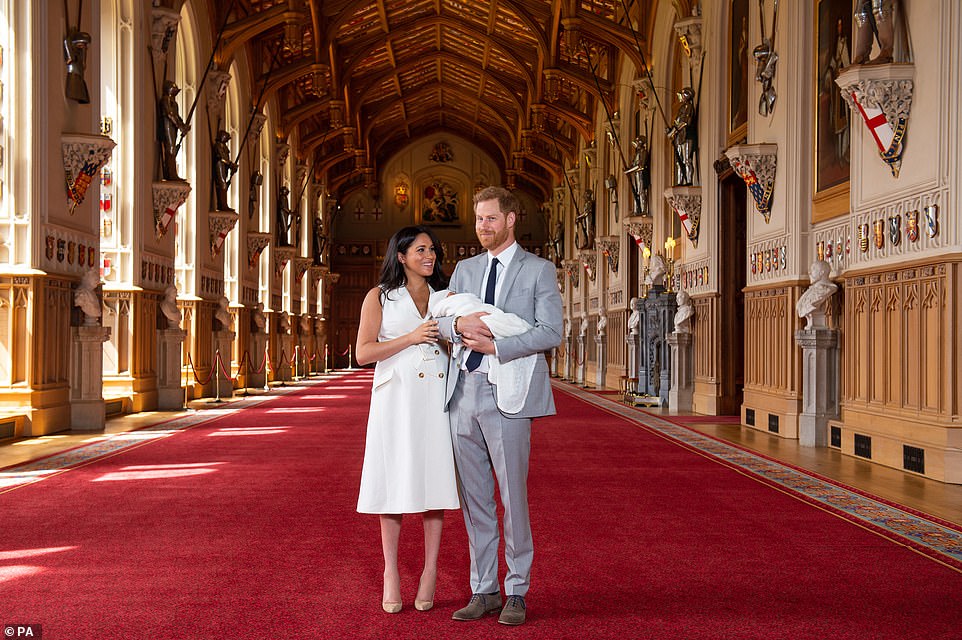 The couple revealed their plans to present their newborn to the Queen later today, having bumped into the Duke of Edinburgh shortly before the photocall

But the couple chose not to use a courtesy title and the decision fits with Harry and Meghan’s desire to give their son as normal a life as possible despite his royal heritage.

He shares a name with a character who is part of the Archie gang, along with a host of others – including Moose Mason, Betty Cooper and Jughead Jones – who have been on American news stands for years.

Archie Andrews is known as ‘America’s typical teenager’ and he and his friends have been updated for a modern audience with Riverdale, a Netflix American teenage drama series.

The name is German in origin and means ‘genuine’, ‘bold’ and ‘brave’, and is short for Archibald, but is now a name in its own right.

Harrison means ‘son of Harry’ so is likely to be a tribute to the duke.

It is English in origin and famous Harrisons include the Star Wars actor Harrison Ford.

Archie is not entitled to be an HRH or a prince due to rules set out more than 100 years ago by George V.

Prince George, Archie’s cousin, reportedly told a dog walker earlier this year that his name is Archie when questioned by the pet owner. 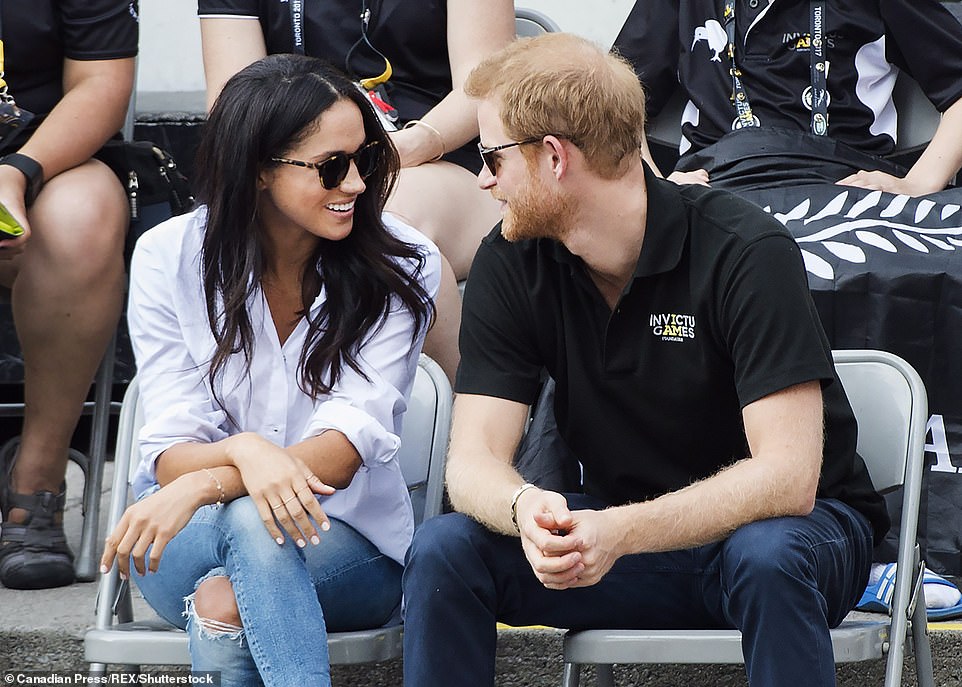 Prince William wants to RETURN to the NHS as an air ambulance pilot to do his bit in the fight against coronavirus Prince William, who...
Read more
News Stories

Prince William wants to RETURN to the NHS as an air ambulance pilot to do his bit in the fight against coronavirus Prince William, who...
Read more
- Advertisement -