Banksy SALUTES whoever painted over his anti-Brexit artwork

Banksy has sarcastically praised whoever painted over his pro-EU artwork on the wall of a Dover building – saying ‘the white flag says it just as well.’

The artwork – valued at around £1million – appeared on a former amusements arcade near Dover’s busy ferry terminal in May 2017 and showed an EU flag with a workman chipping away one of the stars.

But the mural was covered up with scaffolding last month, and then mysteriously whitewashed.

Today, on his Instagram, Banksy revealed plans to update the piece ‘on the day of Brexit.’

He added: ‘But seems they’ve painted over it. Nevermind. I guess a big white flag says it just as well.’ 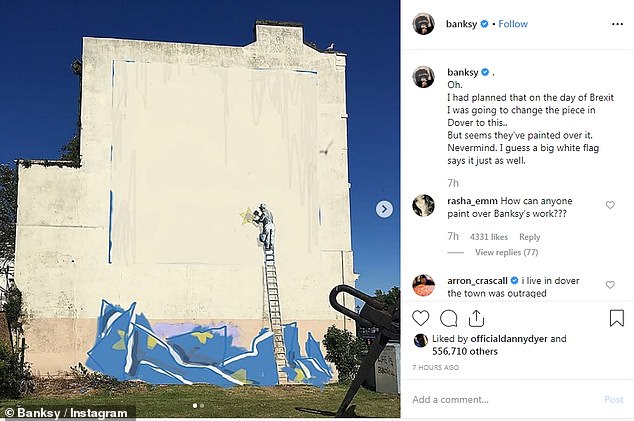 Banksy revealed plans to update the piece ‘on the day of Brexit.’ The computer generated image shows a lone man hammered onto a star while the rest of the EU flag has fallen away 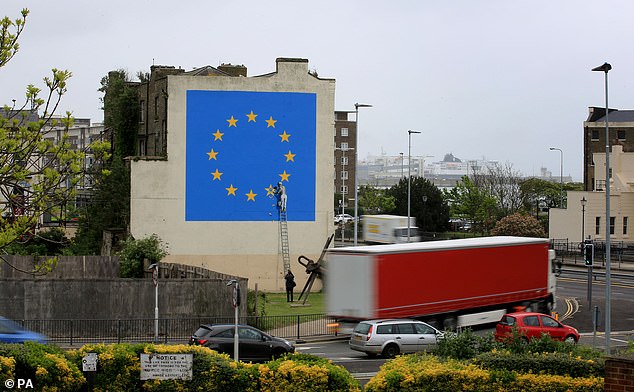 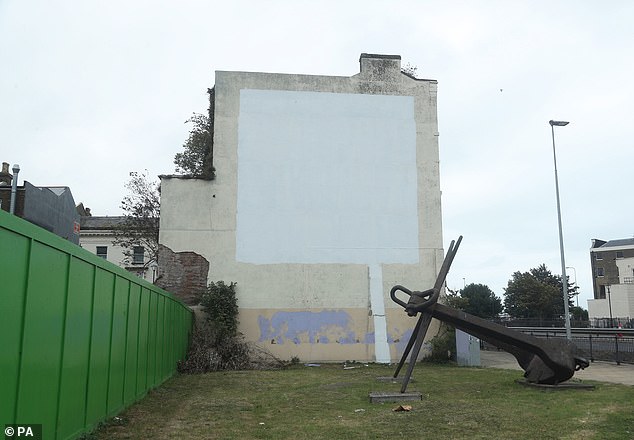 It was painted in May 2017 on the side of the Castle Amusements building, but it was covered up with scaffolding last month, before being smothered in white paint

Last month, residents noticed that it had been covered up with white paint and scaffolding.

Prior to it being covered in white paint the art on the building in Townwall Street had begun to deteriorate, prompting calls from Dover and Deal MP Charlie Elphicke to protect the piece.

The building is owned by the late Jim Godden and his family, who own a range of amusements and arcades across Kent and the south of England.

The MP previously called on Dover District Council to save the artwork if it does remain intact.

He wrote on Twitter: ‘Very disappointed by the disappearance of the Dover Banksy. A culturally iconic statement on our times.

‘We asked Historic England to use their powers to protect this work but they refused. This is the result. They should hang their heads in shame.’

Mr Elphicke added: ‘Historic England have previously listed the Abbey Road crossing and even a 1960s Bournemouth bus depot described as ‘hideous’. If they are going to list things like that, they should have listed an iconic and culturally important piece of art like our Banksy.’

Other Twitter users branded the painting over of the mural as ‘cultural vandalism’.

The Twitter account of a pub in the town, The Mash Tun, wrote: ‘On behalf of the people of #Dover, I would like to deplore the obliteration of our #Banksy. Cultural Vandalism of the highest order.’

Richland Chester wrote: ‘Given how valuable this art is, isn’t there a case against whoever ordered its destruction? They’ve ruined a valuable, freely-donated, public work of art.’

But others disagreed that the mural’s removal was a bad thing.

User @CaymanOC wrote: ‘It’s graffiti, which is vandalism – how can it then be deemed vandalism if it’s removed?!

‘Just because we know of the guy that did it doesn’t take away that he’s painted graffiti on somebody’s property’.

Scaffolding company Deal Scaffolding said it had been asked to supply scaffolding for general building work but was unaware of any specific purpose.