US Stealth Bomber costing $2.1bn and with call-sign ‘DEATH’ lands at British RAF base

US Stealth Bomber costing $2.1bn and with call-sign ‘DEATH’ lands at British RAF base after training mission in Iceland as stunned plane fanatics look on

By Darren Boyle for MailOnline

Planespotters gathered at the edge of RAF Fairford in Gloucestershire at sunset yesterday to witness a $2.1bn US B2 Spirit stealth bomber coming in to land following a training mission.

The nuclear-capable aircraft was involved in a training mission over Iceland when it returned to the RAF base shortly before nightfall.

Dozens of planespotters gathered around the airbase’s perimeter fence waiting for the stealth bomber’s return. 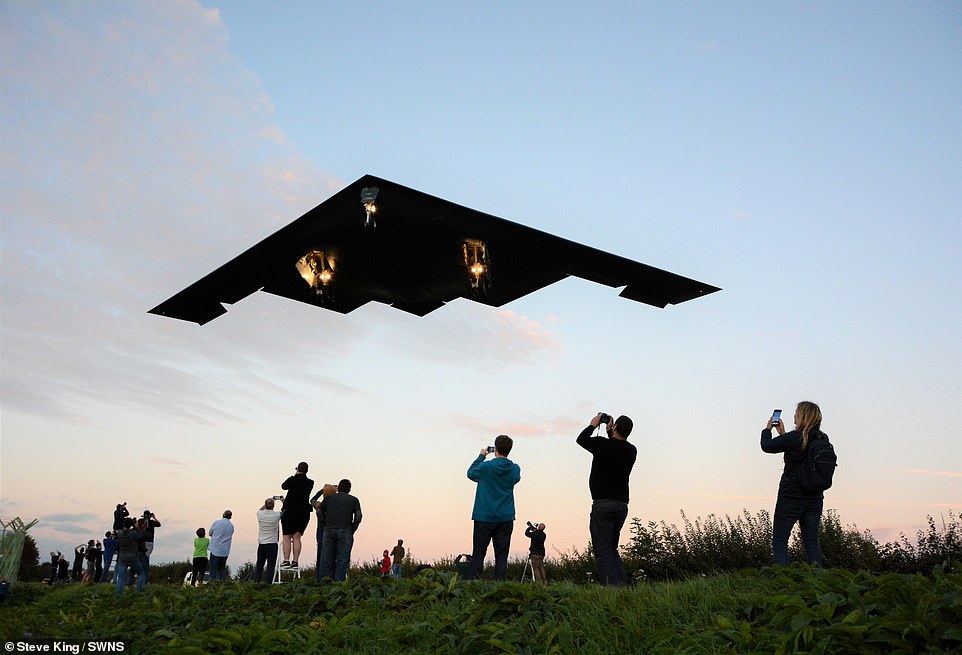 The jet, pictured, is the most expensive aircraft ever built and was designed to deliver either conventional or nuclear bombs

Steve King, who was among the crowd, said: ‘It was quite a sight, as they are a unique and weird UFO-type looking planes.

‘I thought I’d take a different perspective, including some of the crowd looking up at it.’

‘Living fairly local to the air base I am a regular visitor when these exercises take place.’

Three of the B2 bombers – which cost $135,000-an-hour to operate – have been involved a a series of NATO training missings.

The planes, which use the callsigns DEATH 1, DEATH 2 and DEATH 3 are temporarily based at RAF Fairford as part of a series of NATO training exercises.  The aircraft touched down in Gloucestershire on August 27 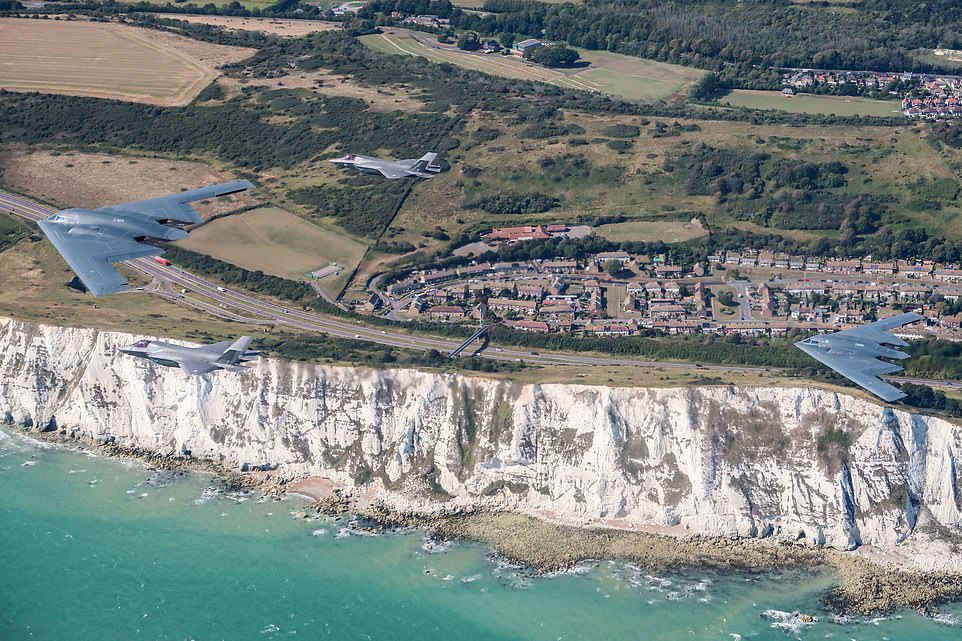 Earlier this summer, a pair of B2s were photographed with a pair of F-35 Lightning jets over the White Cliffs of Dover 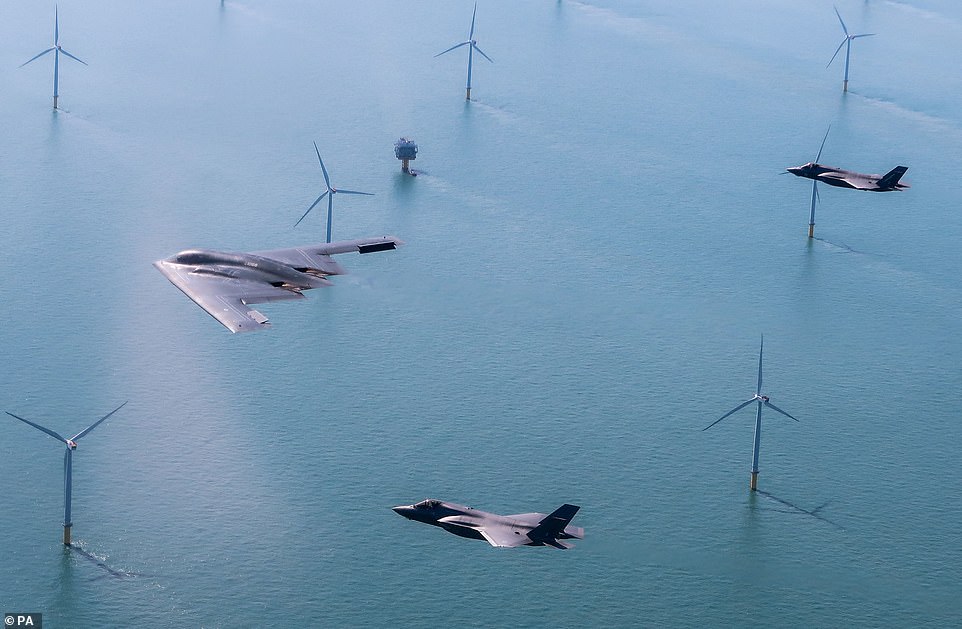 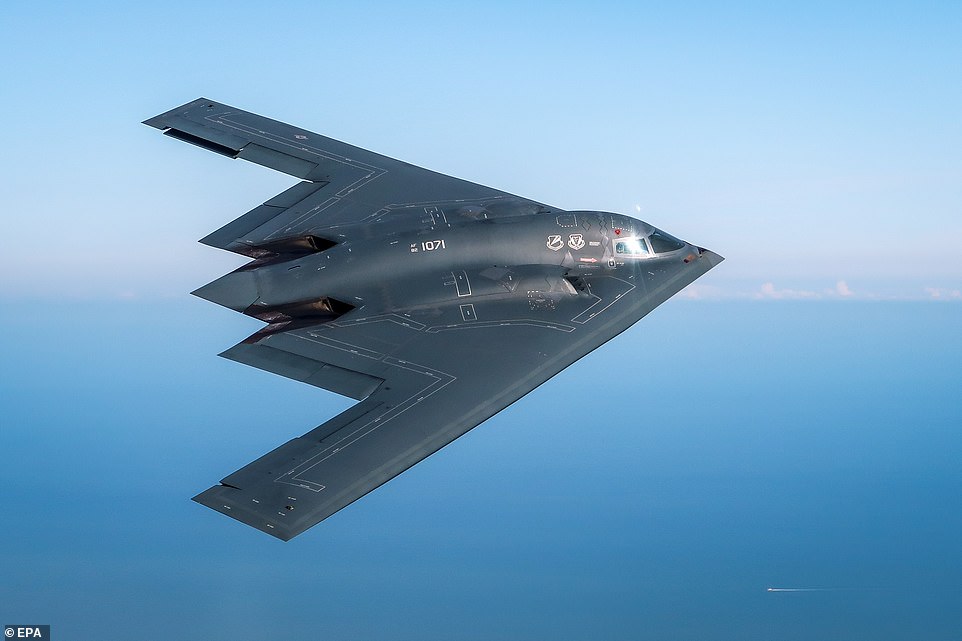 They are capable of carrying nuclear bombs as well as conventional explosives and were designed to be able to deliver a payload to the Soviet Union as they could evade their air defence system due to their ability to fly 10,000 miles and only need to refuel once 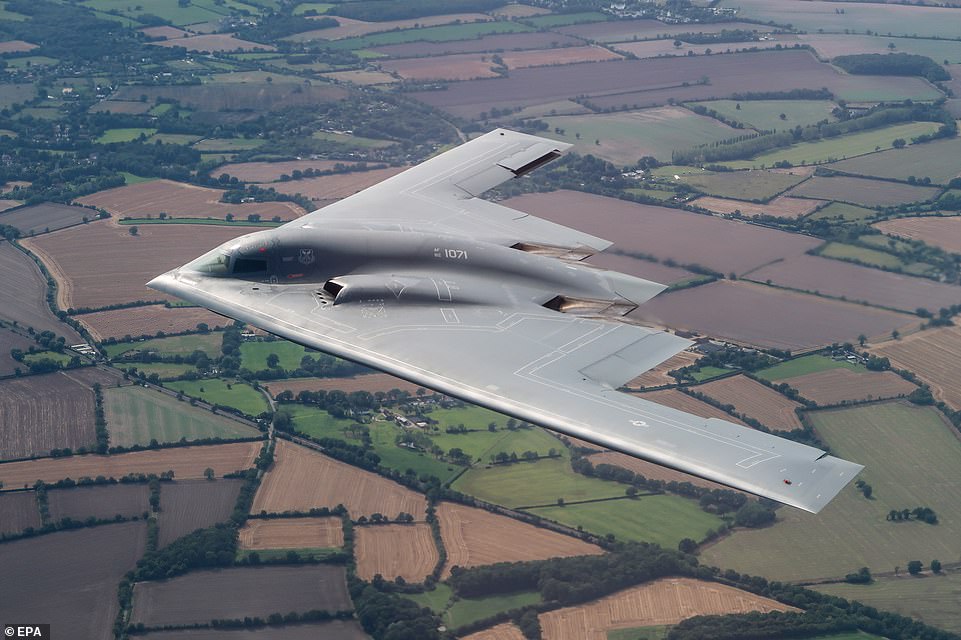 The bombers are being based temporarily at RAF Fairford, as it has a longer runway than other air force bases and climate-controlled B2 aircraft hangars

With a 172-foot wingspan and a design that allows them to travel 10,000 miles with only one mid-air re-fueling, so that they could bypass Soviet air defence systems, they are one of the most deadly warplane models in the sky.

They are a small part of a US fleet of 20 Stealth Bombers, the country’s most technologically advanced aircraft ever made, which are based at Whiteman Air Force Base, Missouri.

First designed under the Carter Administration, originally 132 were ordered by the United States. However, this was quickly scaled back following the collapse of the Soviet Union.

Since then the Stealth bombers have been used in fighting over Kosovo, where they bombed Serbian forces as NATO countered ethnic cleansing in the region, to take out Taliban targets in Afghanistan, and more recently to hit ISIS positions in Syria. 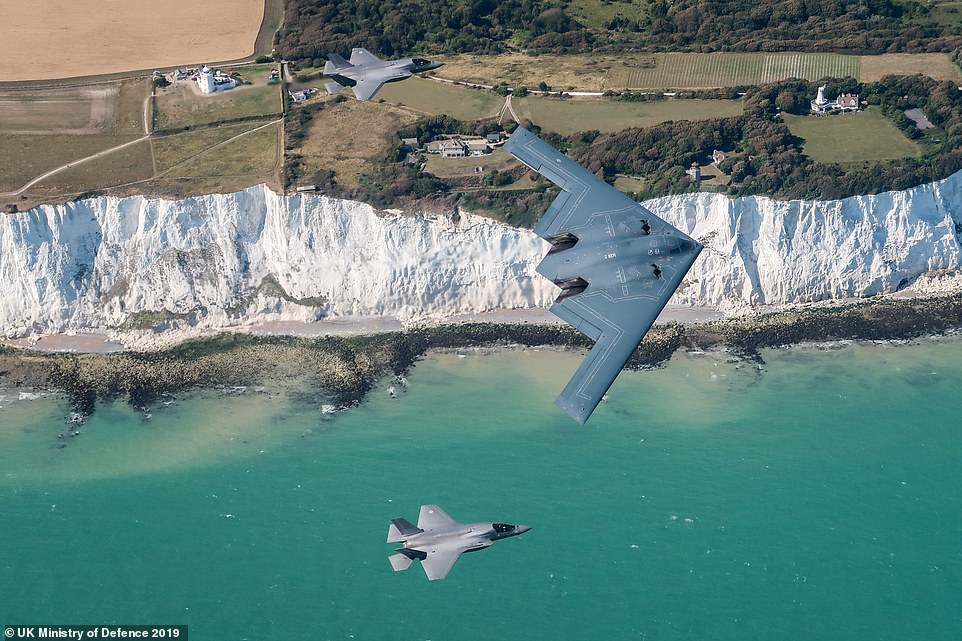 This series of missions in the UK is the first time the US B-2 aircraft have operated alongside non-US fifth generation fighters. The RAF F-35 Lightnings, pictured, escorted the heavy bombers along the White Cliffs of Dover last month 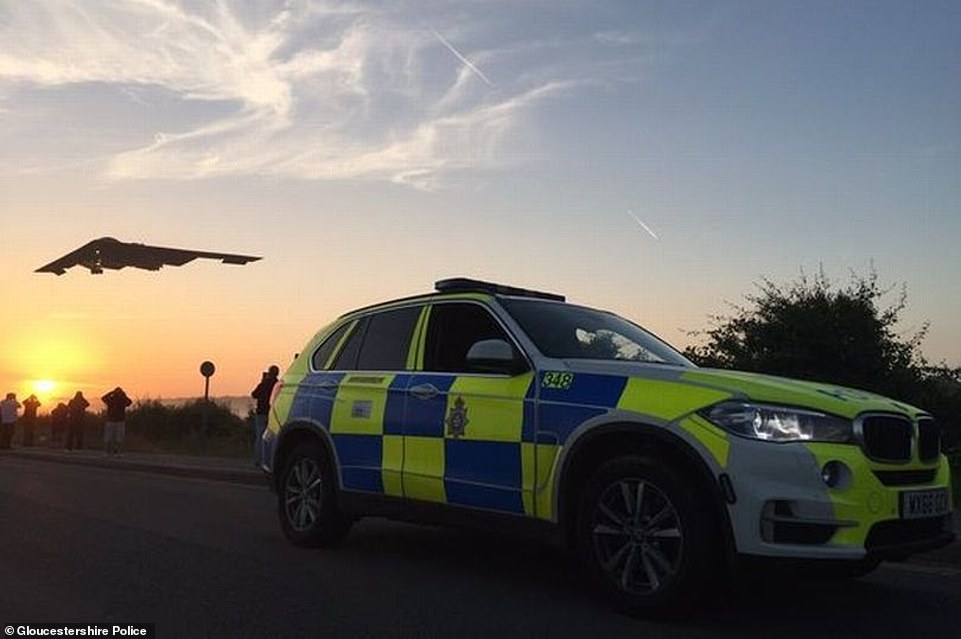 The heavy bombers have attracted the attention of plane spotters as they use RAF Fairford in Gloucestershire, pictured 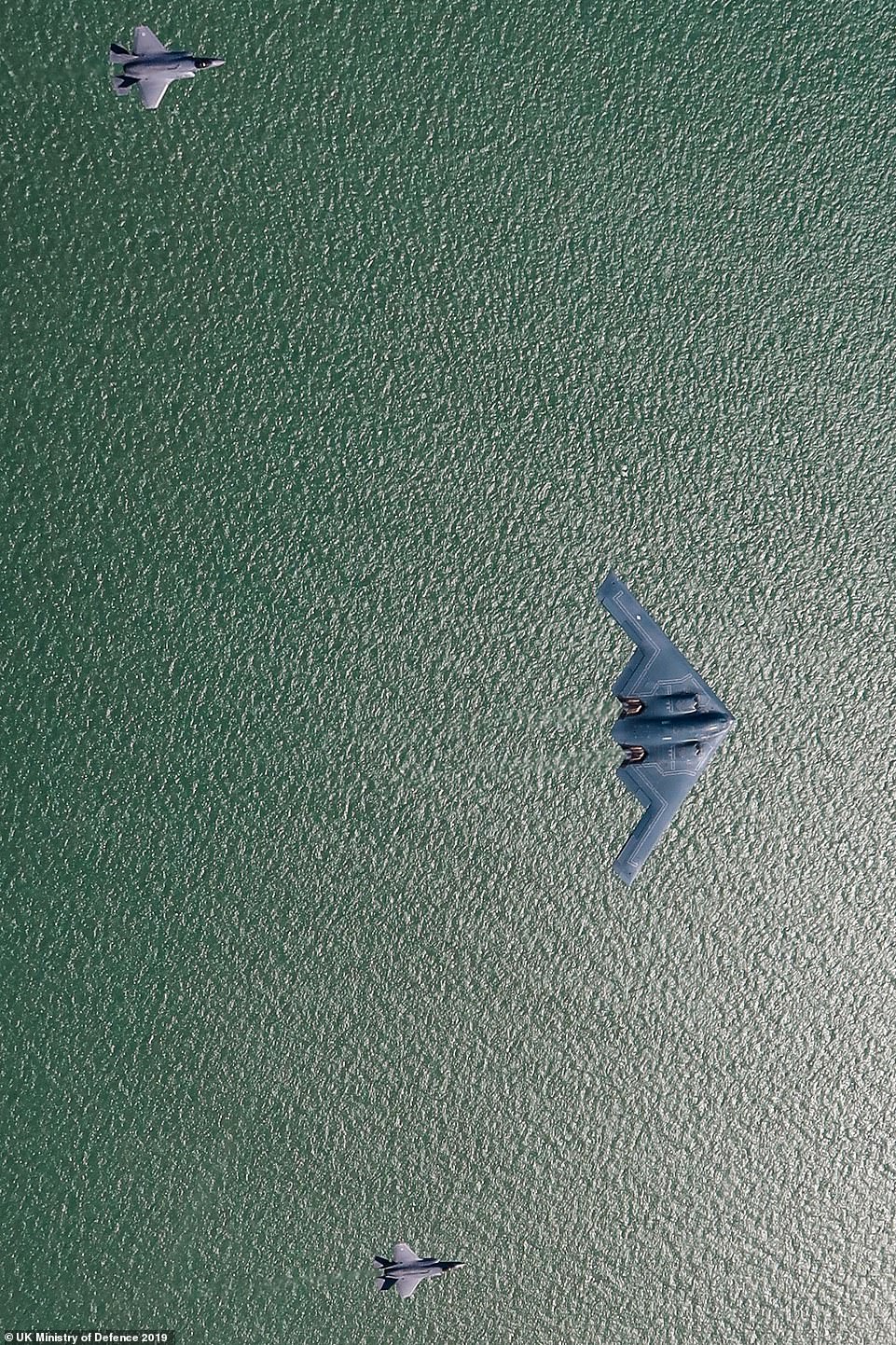 RAF Fairford is classed as a ‘forward operating base’ for the 509th Bomb Wing in the US European Command area.

During their training missions, the B-2s have flown with RAF F-35s, landed in Iceland at Naval Air Station Keflavik, Iceland in August and performed hot-pit refuelling training on the Azores. During hot-pit refuelling, ground crew replenish the aircraft’s fuel supply while the engines are running.

‘The beauty of our partnerships is that we get to understand how they see the world. Working alongside international fifth generation aircraft provides unique training opportunities for us, bolsters our integration capabilities, and showcases the commitment we have to our NATO alliance.’

Commenting on the series of exercises, Armed Forces minister Mark Lancaster said: ‘NATO is the bedrock of Euro-Atlantic defence, and those secure foundations continue to be reinforced by the training exercises being completed between the Royal Air Force and our special friends in the US Air Force.’

Last week, the B-2s conducted a training mission in the Arctic Circle – the furthest north they have ever operated in Europe, according to US Strategic Command.

The aircraft conducted a night midair refuelling exercise before returning to RAF Fairford. 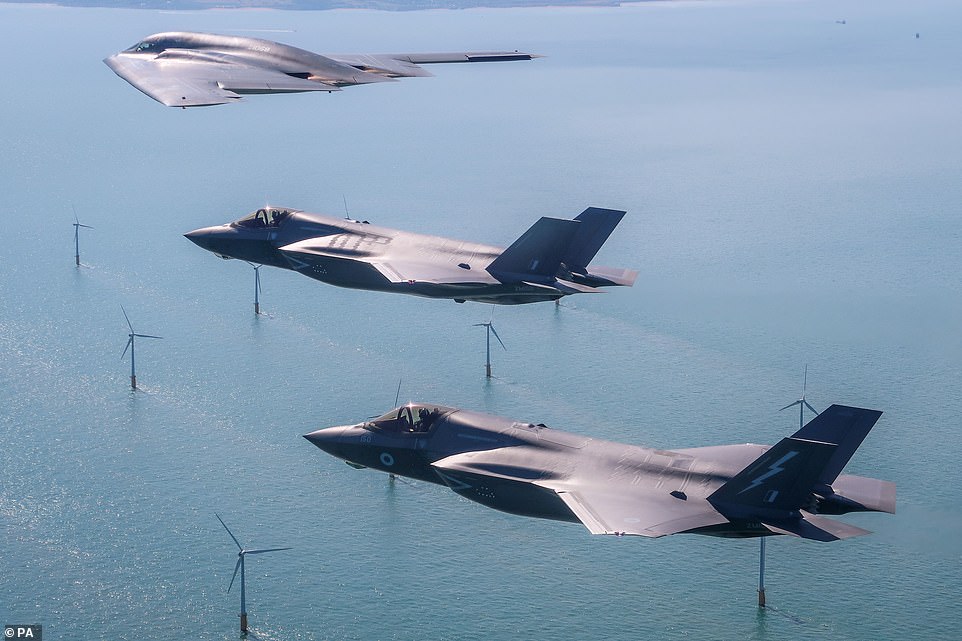 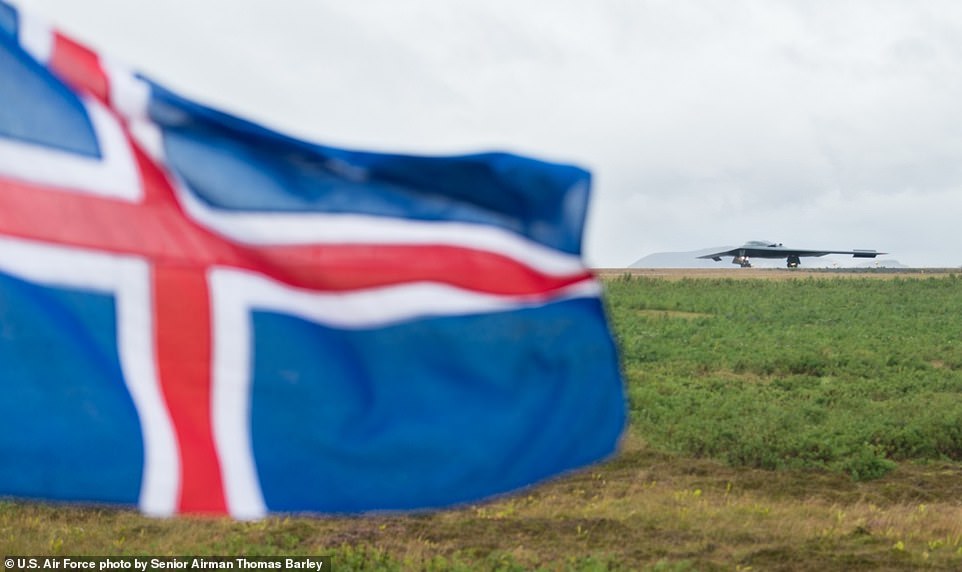 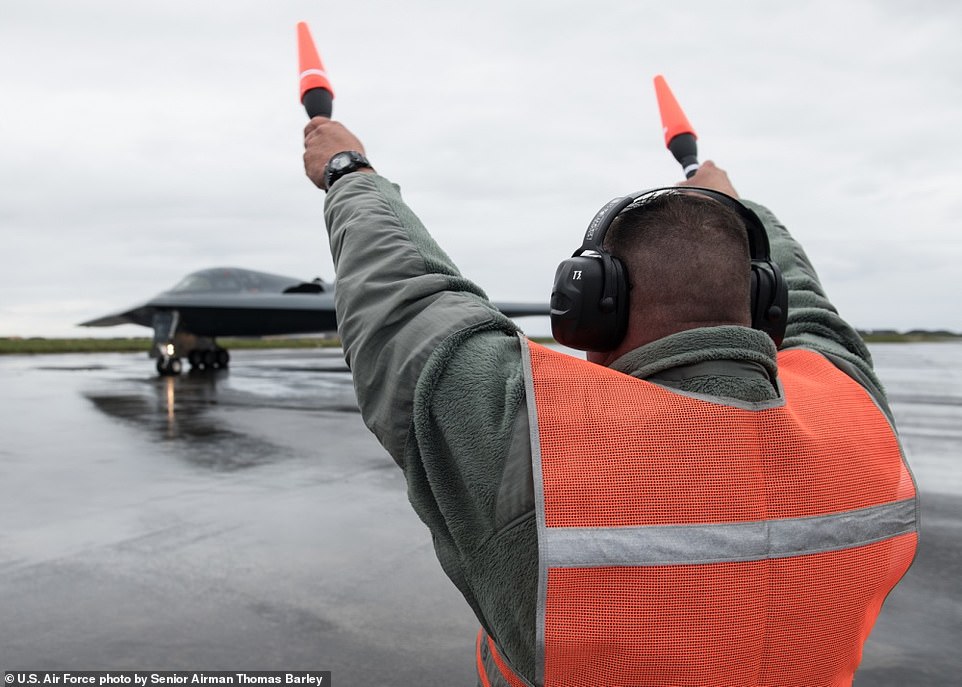 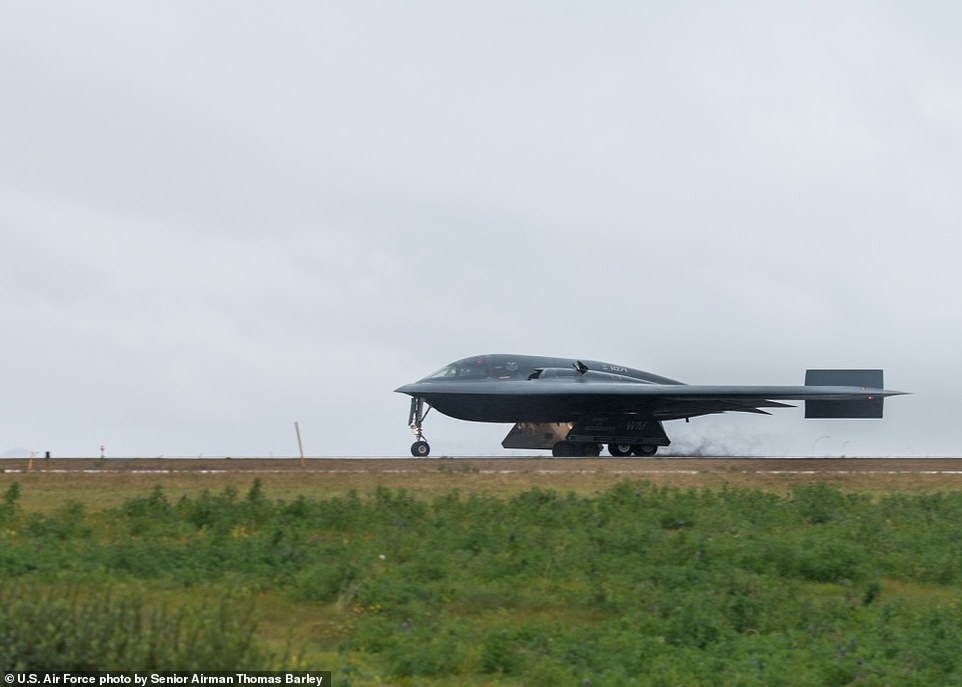 The B-2 bomber, named Spirit of Mississippi, was involved in a training mission to Iceland  on August 28 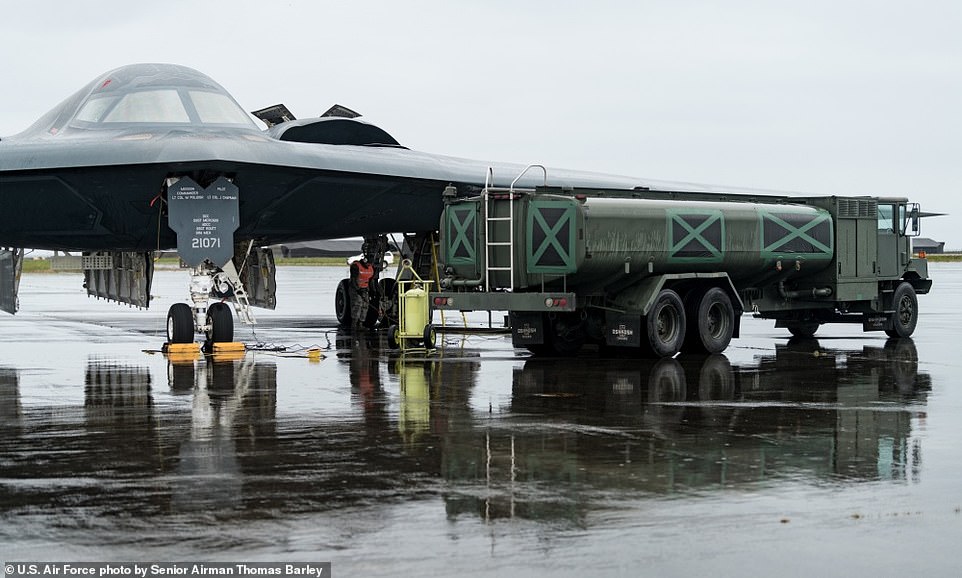 According to the US Air Force: ‘The B-2 bombers, part of the Bomber Task Force currently deployed to the U.S. European Command area of responsibility, are from the 509th Bomb Wing, Whiteman Air Force Base, Missouri. The aircraft arrived in theater on Aug. 27, and are temporarily operating out of RAF Fairford. The deployment of strategic bombers to the U.K. helps exercise RAF Fairford as U.S. Air Forces in Europe’s forward operating location for bombers.

‘Strategic bomber missions enhance the readiness and training necessary to respond to any potential crisis or challenge across the globe.’ 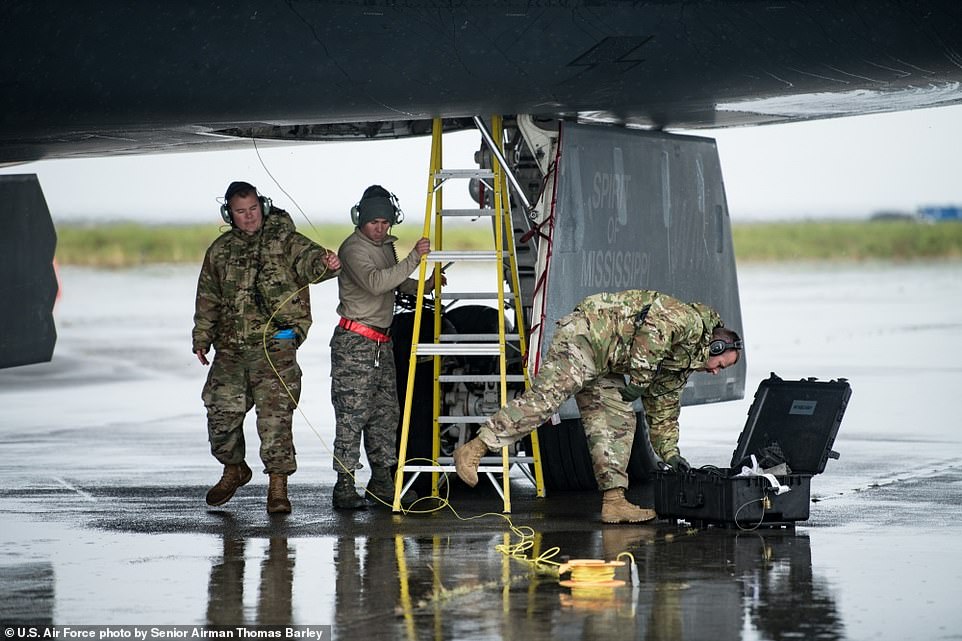 B-2 SPIRIT: MOST EXPENSIVE AIRCRAFT EVER, BUILT TO DROP ARMAGEDDON ON THE SOVIETS

The B-2 Spirit is the U.S. Air Force’s deadliest and most expensive plane – a Cold Warrior’s invention which has since been used to bomb the Taliban and ISIS.

On board its flight crew of two can stay in the air for 33 hours, at the controls of a plane designed to sneak into Soviet territory unseen to drop nuclear bombs, then return to the U.S. in a single flight.

The B-2s were first designed under the Carter administration, came close to being canceled, and finally took flight for the first time in 1989, just as the Soviet Union they were supposed to fight was collapsing, entering Air Force service in 1997.

They have been used to fight in Kosovo, where they bombed Serbian forces as NATO moved in to counter ethnic cleansing of the Muslim Albanian minority, and in the war on terror, taking out Taliban targets in Afghanistan and most recently ISIS positions in Syria.

All are currently based at Whiteman Air Force Base in Missouri, meaning that the one designated to fly over the Mall is flying 1,042miles to D.C. for the spectacle.

If it flies low enough it will be visible from the ground, but it is almost invisible on radar, with its stealth design making it look like a pigeon on radar screens.