Cringeworthy footage shows Labour supporters presented with accusations of anti-Semitism that they told are relate to Conservative leader Boris Johnson.

The filmmaker repeats controversial statements he claims were made by Mr Johnson, before then asking them if he should still be allowed to run for office.

After they all claim that Mr Johnson should be forced to stand down, the filmmaker reveals the comments are actually attributed to Mr Corbyn.

The revelation causes a mix of reactions, with some expressing shock and disgust, while others ask for the filmmaker to stop recording.

The filmmaker repeats controversial statements he claims were made by Mr Johnson, before then asking them if he should still be allowed to run for office

Among the controversies used to trick supporters in the video is Mr Corbyn’s endorsement of a century-old book suggesting banks were controlled by the Jews.

The Labour leader wrote the foreword for a new edition of JA Hobson’s Imperialism: A Study, in which the author argues European finance was controlled ‘by men of a single and peculiar race’.

In 2011, Mr Corbyn called the book a ‘great tome’, a quote used by the filmmaker and attributed to Mr Johnson in a bid to trick Corbyn supporters taking part.

One shocked supporter replies: Well, what can I say? I don’t know much about it but the Jews have got a lot of power and a lot of money, haven’t they?

‘They do manipulate things; power is money.’

Another supporter, after expressing shock at the revealtion, asks: ‘Is that true? I mean, I still think vote Labour.’

The filmmaker then asks another supporter about a recent poll that found 50 per cent of British Jews would think about leaving the UK if Corbyn was elected.

She says: ‘Where are they going to go, to Palestine? Why are they scared of him? Because they’ve got off-shore accounts and they don’t want to pay tax.’

It comes after Mr Corbyn rejected claims he has made Labour a ‘refuge’ for anti-Semites today amid renewed accusations the party has failed to deal with the issue.

Lawyers for the Jewish Labour Movement (JLM) said 70 Labour staffers past and present have given sworn testimony into an official inquiry by the Equalities and Human Rights Commission (EHRC) into anti-Semitism in the party.

According to a leaked copy of its submission to the inquiry, the JLM said Labour was ‘no longer a safe space’ for Jewish people or those who stood up against anti-Semitism.

‘Since Jeremy Corbyn became leader of the Labour Party, he has made the party a welcoming refuge for anti-Semites,’ it said.

‘He has done that in a number of ways including by publicly supporting anti-Semites and anti-Semitic tropes. The Labour Party is cast in his image.’

Asked about the claims during an election campaign visit to Peterborough, the Labour leader said: ‘I completely reject that.’

He said: ‘When I became leader of the party there were no processes in place to deal with anti-Semitism. 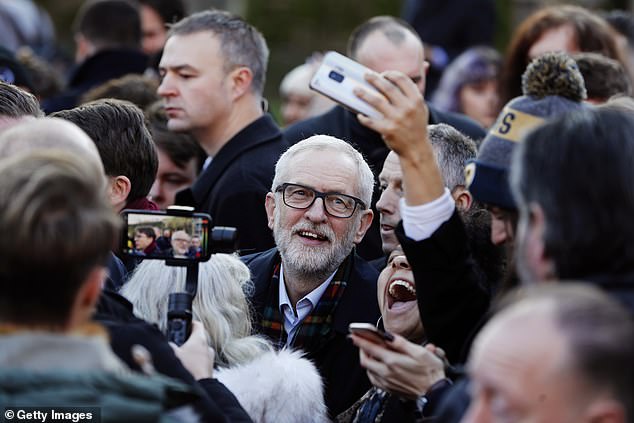 The Jewish Labour Movement has made a formal submission to the EHRC in which it claims Labour under Mr Corbyn, pictured in Nottingham yesterday, has tried to deny that it has a problem with anti-Semitisim

‘I think we’ve got processes in place that have improved it a great deal.’

James Libson, a partner at the Mishcon de Reya law firm representing the JLM, said their submission included evidence of interference by the leader’s office in internal investigations into complaints of anti-Semitism.

The EHRC announced in May that it was launching a formal investigation into the party after receiving a number of complaints relating to allegations of anti-Semitism. 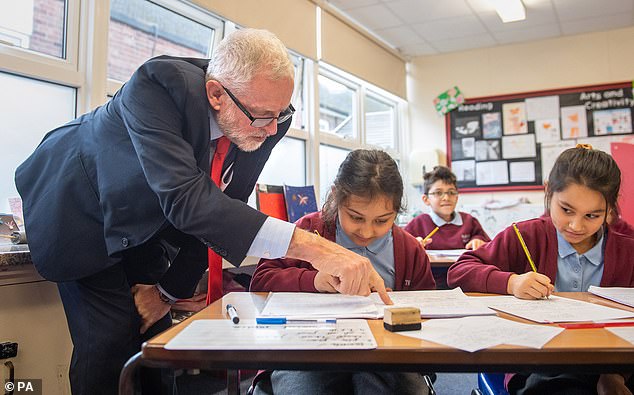 Jeremy Corbyn, pictured at a campaign event in Peterborough today, and the Labour Party are under investigation by the Equality and Human Rights Commission

Its remit is to determine whether unlawful acts have been committed by the party or its employees, and whether Labour responded to complaints in a ‘lawful, efficient and effective manner’.

It followed persistent complaints by Jewish groups that anti-Semitism had been allowed to flourish within the Labour ranks since Jeremy Corbyn became leader in 2015.

The leadership subsequently acknowledged that it was too slow to respond to the concerns, but insisted that new measures have been put in place to deal with complaints more effectively.

The issue erupted into the General Election campaign last week, when the Chief Rabbi Ephraim Mirvis warned that ‘a new poison sanctioned from the top’ had taken root in the party, and questioned Mr Corbyn’s fitness for office.

The Labour leader faced further criticism after he repeatedly refused to apologise during an interview with the BBC’s Andrew Neil – although he later did so during an appearance this week on ITV.