Female prison officer, 40, is jailed for two years for having a seven-month affair at HMP Frankland with gangster Curtis ‘Cocky’ Warren after denying cutting a hole in her uniform for sexual purposes

A female prison officer at a top security prison has today been jailed for two years after admitting an affair behind bars with notorious criminal Curtis ‘Cocky’ Warren.

Stephanie Smithwhite, 40, was an officer at HMP Frankland near Durham where the gangster, nicknamed ‘Cocky’ for his disdain of authority, was serving time.

Appearing before Durham Crown Court today Smithwhite, from Boldon Colliery, South Tyneside, was handed a sentence of two years after the Probation Service completed a report on her misconduct.

The prison officer admitted two counts of misconduct in a public office in January, the first related to their sexual relationship, said to have lasted between June and December 2018.

Stephanie Smithwhite, 40, former prison officer at HMP Frankland appeared at Durham Crown Court today to be sentenced for two counts of misconduct in a public office

And the second count related to her not reporting that she knew he had access to a smuggled phone.

It was understood this tiny handset was a so-called ‘prison phone’ little bigger than a £2 coin. 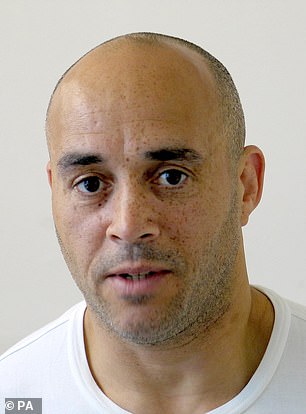 Curtis ‘Cocky’ Warren, 57, is a Liverpool-born gangster who became an international drug trafficker worth tens of millions of pounds

Smithwhite, denied cutting a hole in the trousers of her prison uniform for a sexual purpose, but the sentencing judge said it was hard to imagine why else it was there

The court heard, she ‘fell in love with the wrong man in the wrong situation’ and exchanged hundreds of sexually explicit love letters with the infamous drug baron.

At his request she sent him a picture of herself and admitted kissing him and performing sex acts in his cell, a prison kitchen and a laundry room.

Prosecutor Rupert Doswell told the court that Smithwhite was found to have a tattoo of a rose with the name ‘Curtis’ next to it, which she said she had done in December 2018.

She was also found to be in possession of a Zanco ‘prison phone’ of the kind often smuggled into jails – though she denied she intended to take it in for Warren’s use.

The pair were rumbled when other members of staff at the prison became suspicious and Smithwhite was subject to direct surveillance until December 13 2018 when she was caught passing a note to the inmate, which he had attempted to eat.

The note was recovered and further searches were carried out including of Smithwhite’s car where two mobile phones were found – one black and one white Samsung. 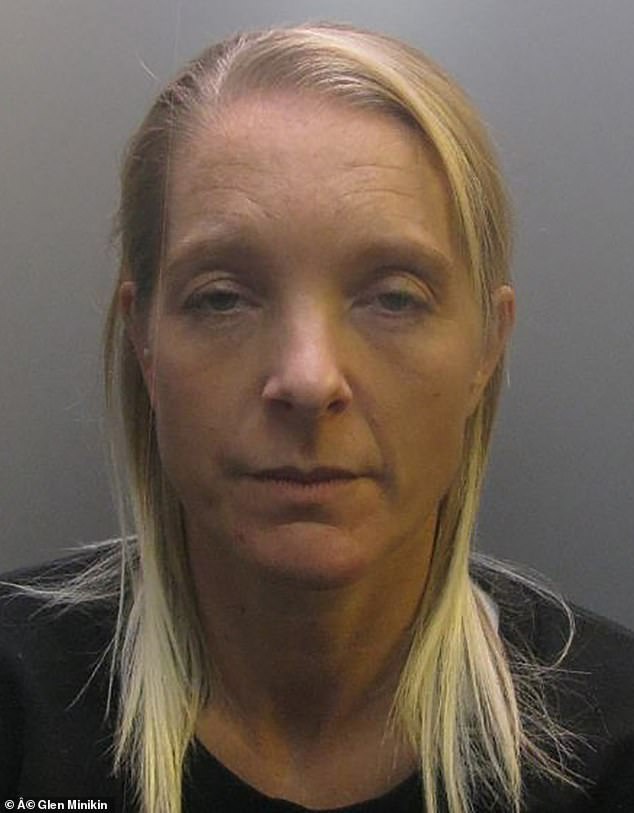 Smithwhite (pictured), the court heard, ‘fell in love with the wrong man in the wrong situation’ and exchanged hundreds of sexually explicit love letters with the infamous drug baron 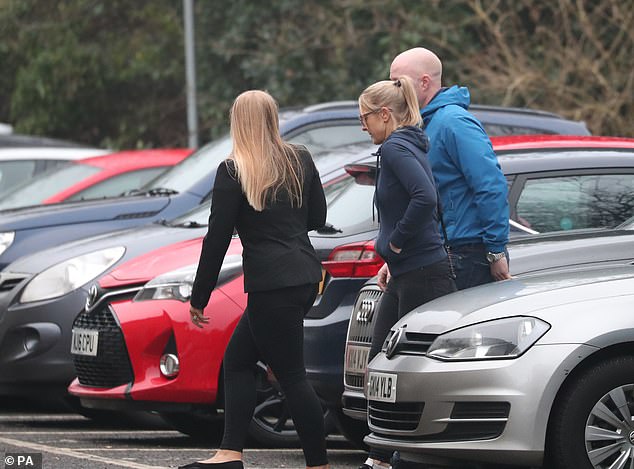 Smithwhite admitted having a sexual relationship with notorious criminal Curtis ‘Cocky’ Warren at Frankland Prison, where she worked

Smithwhite, who has a young grandson, was dismissed from her role and has since found work as a carer.

Judge Jonathan Carroll said prisons were there to ensure the protection of society and victims of crime and they ‘are not easy places to manage.’

He told Smithwhite: ‘You knew who he was, what he had done. ‘Perhaps it was his notoriety itself that attracted you to him. 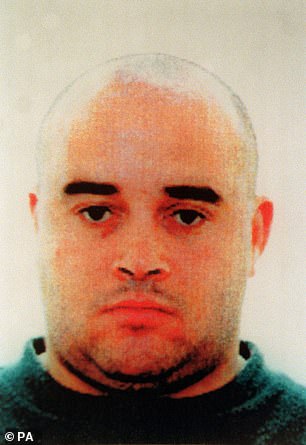 ‘It was equally clear that you were infatuated with him, demonstrated by your tattoo of his name on you.’

The judge added: ‘I accept there is no evidence that you did supply contraband or information but the degree of risk of compromise to prison security when you yourself had been compromised.

‘There could be no-one in Frankland prison, least of all an officer who would not know of his notoriety.’

The court also heard that a copy of ‘Cocky – The Rise and Fall of Curtis Warren@ – a book about the inmate, was found at Smithwhite’s home address, which Mr Doswell argued meant she was ‘clearly aware of his notoriety.’

Warren, 57, is a Liverpool-born gangster who became an international drug trafficker worth tens of millions of pounds.

He was born in Toxteth and embarked on a criminal career from an early age. At just 12 he stole a car. Then, after leaving school with no qualifications, he was sent to Borstal at 18 for attacking a police officer and being involved in a riot.

On his release, the 5ft 9in, barrel-chested fitness fanatic worked as a bouncer. He took steroids to bulk up, in an attempt to appear even more intimidating. He was eager to exert a ruthless authority over the streets of Liverpool. He ‘taxed’ prostitutes and their punters in the city’s red light district by threatening them with blackmail if they did not meet his financial demands.

In 1983, he was jailed for five years for armed robbery. But for Warren, prison simply provided an entree into the real criminal underworld. 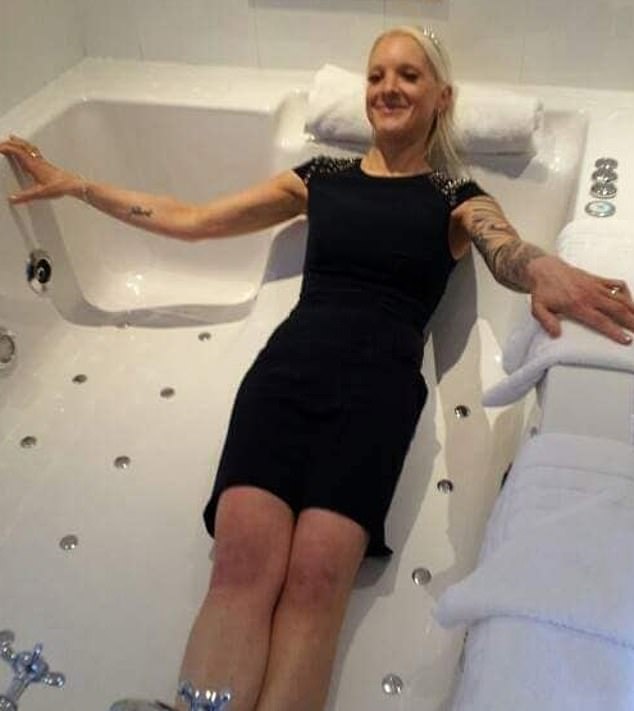 Smithwhite, who is from Boldon Colliery, South Tyneside, was found to have a tattoo of a rose with the name ‘Curtis’ next to it, which she said she had done in December 2018

He made contacts who, on his release, helped him establish himself as a top player in a nationwide drug-dealing network.

He forged links with a Colombian drugs lord to guarantee the best supply of cocaine into the country, and came to realise that establishing links with international dealers was the way to move into the upper echelons of Britain’s drug hierarchy.

In 1992, he was among 28 people arrested on suspicion of masterminding a 1,000-kilo shipment of cocaine to the UK. However, he was acquitted halfway through the trial when the judge ruled there was insufficient evidence against him.

It was said that when he walked free from court he taunted officers who had brought the prosecution by saying: ‘I’m off to spend my f*****g money,’ but Warren denies uttering those words. A few years later, he moved to Holland.

Around that time he was named as Interpol’s ‘Target One’ – a ranking that made him the most wanted international criminal. Consequently, Dutch police placed him under surveillance, tapped his phones and tailed him.

In 1997 he was jailed for 12 years following a Dutch police investigation that established he was importing cocaine and cannabis worth £125 million into Britain.

In the same year he made his appearance in The Sunday Times Rich List as a ‘property developer’ and by 2005 the newspaper estimated his wealth at around £76million.

He was also organising shipments of guns and hand grenades, tools of the gangland trade. In jail he established himself as a hard man when he beat a Turkish inmate to death. He was sentenced to a further four years for manslaughter. 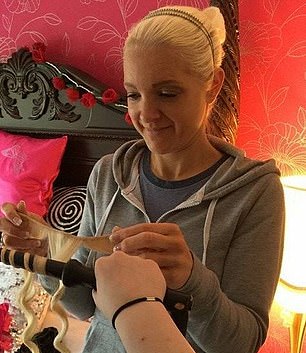 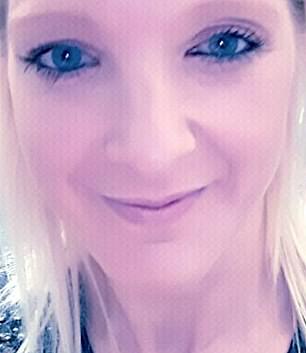 It was after he was released in 2007 that he moved to Jersey. Two years later he was jailed there for 13 years for a plot to ship £1million of cannabis to the island.

The Jersey court drew on evidence from his life in Holland, and heard how Dutch police intercepts of phone calls show he had squirrelled away his money in investments.

It is claimed by the National Crime Agency that he invested £4 million in a gold mining venture in Guyana, as well as more money in petrol stations, properties in numerous countries and a pallet business.

The judges were told: ‘The stark fact is that Warren had ways of laundering his assets in ways that are simply untraceable.’ In one recording he was heard to say that he used a ‘cheap’ money launderer who only charged one per cent commission.

It was said that on ten separate occasions between 1991 and 1996 he passed around £10 million through this contact, meaning he laundered a staggering £100 million. From this figure alone it was calculated that his assets, after inflation, were worth more than £170 million. 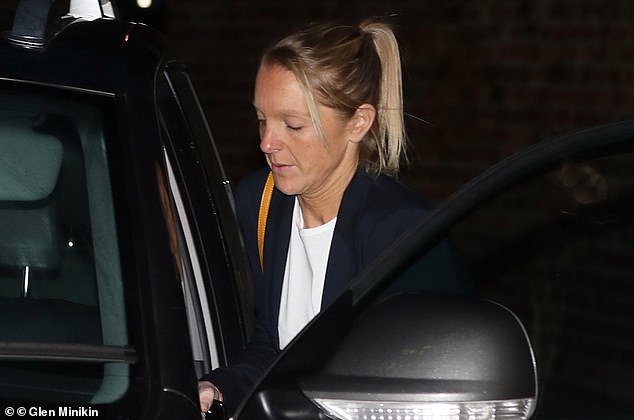 Warren was given a Serious Crime Prevention Order in October 2013 which banned him for owning more than one phone and he was forced to declare his movements and finances.

The following month at a three-week confiscation hearing at Jersey Crown Court, prosecutors claimed he had £198million drugs fortune tied up around the world.

However he told The Guardian he was unable to pay such a ‘fantastic’ amount and said ‘there is no money’.

In December 2013 a court imposed a 10-year prison sentence after he did not pay up the £198million in the given 28 days.

And it is not the first time Warren has been linked with prison staff.

While he was remand in La Moye prison in Jersey in 2007, Teresa Rodrigues, a former senior manager at La Moye who ran the drugs and alcohol counselling unit, confessed to an affair with the barrel-chested gangster.

In an interview with The Mail on Sunday in 2014 she claimed it lasted two years and only ended when he was convicted of drugs smuggling and transferred to a prison on the mainland.

‘We had sex in his little cell most days,’ said Lisbon-born Ms Rodrigues.

NEW YORK (AP) — Country singer Joe Diffie, who had a string of hits in the 1990s with chart-topping ballads and honky-tonk singles like...
Read more
Entertainment