The Met Office has imposed consecutive weather warnings for fog, snow, wind and rain beginning today and not letting up until Tuesday lunchtime, with up to four inches of snow and three inches of rain on the way.

The biggest impact is expected to be on the south coast of England between 9am and 9pm on Sunday, where an amber ‘be prepared’ warning has been imposed for Kent, Sussex and Hampshire for very strong winds.

The Government said it is standing by to support affected communities, with power companies moving crews to areas where they expect the supply to be cut by trees falling on electricity lines. 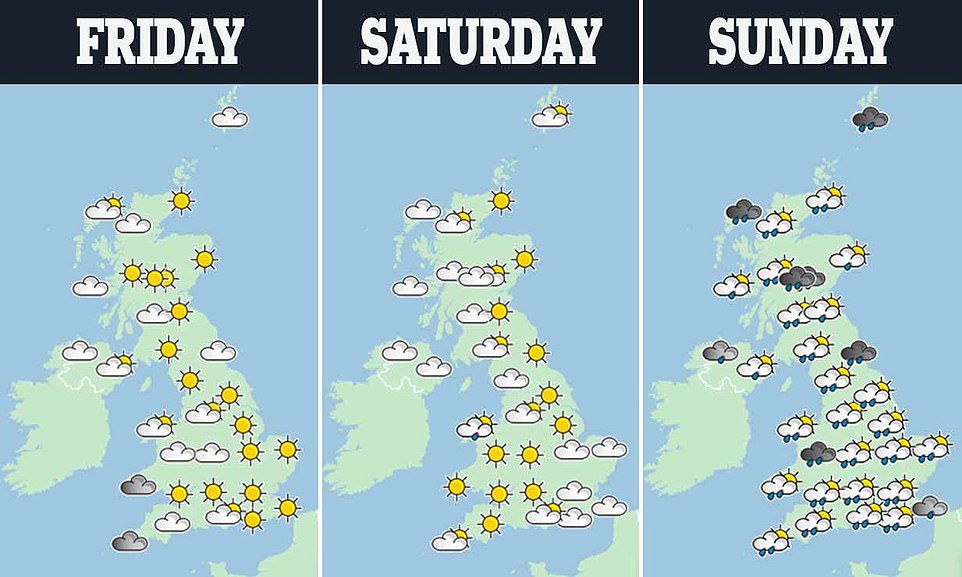 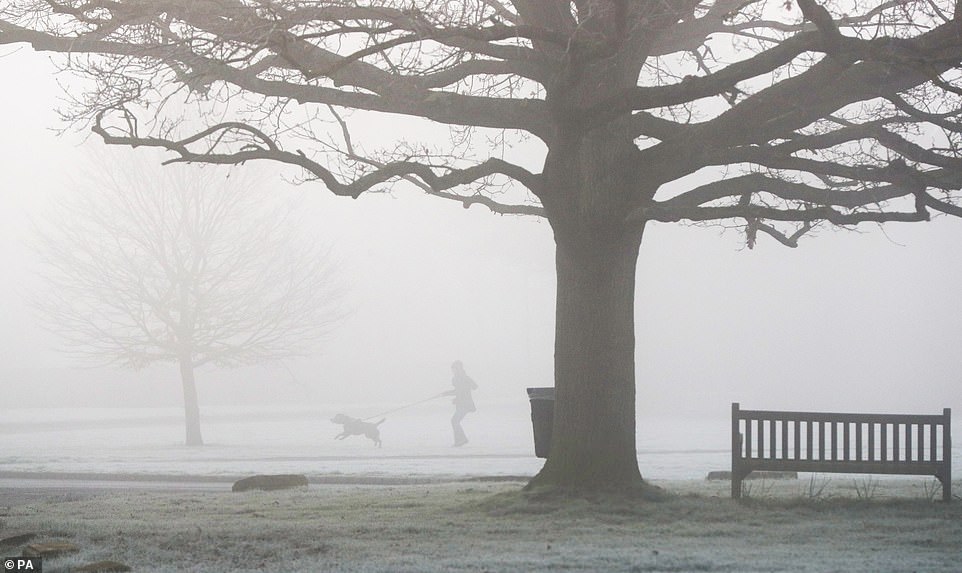 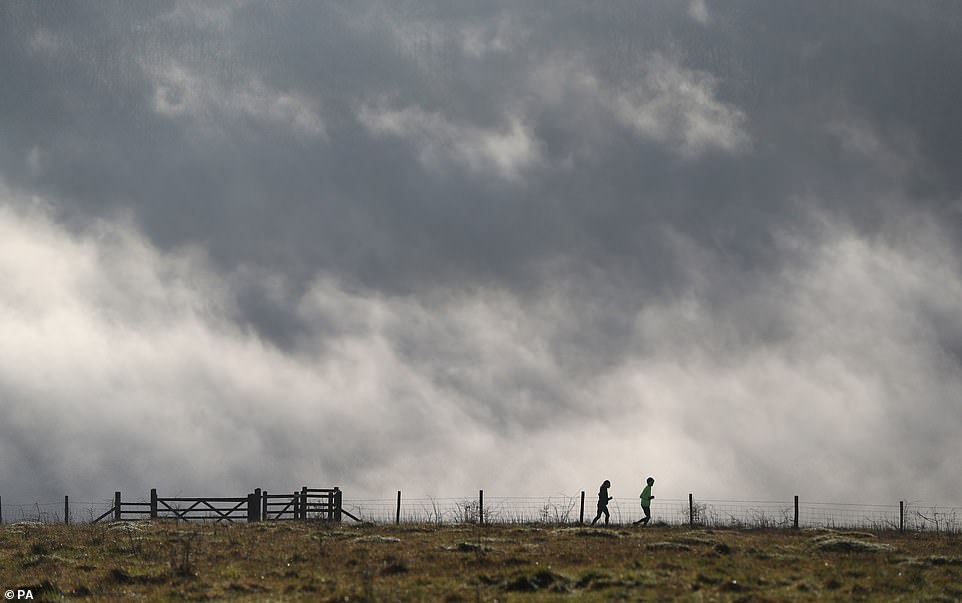 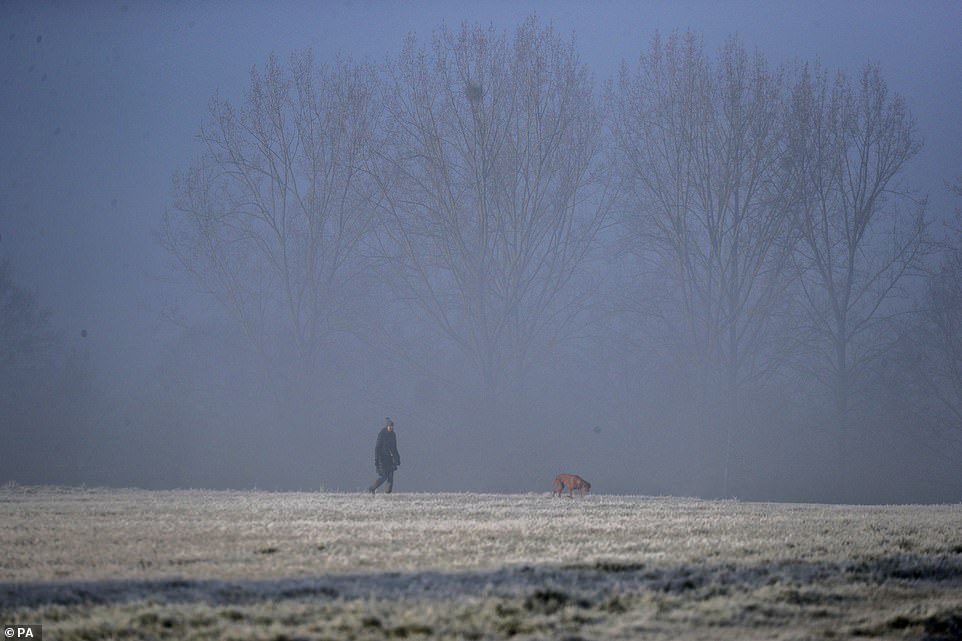 Aviation photographer Trevor Hannant filmed his descent into London Gatwick Airport on a British Airways flight this morning through heavy fog. He tweeted: ‘For those who wonder why spacing increases between aircraft in fog, this is it. Could you see this aircraft from the one behind? Or from the tower to tell the next one they can land? #safetyfirst’

The storm is expected to hit Scotland first from 12pm tomorrow, with the whole of Scotland told to brace for winds gusting to 60mph quite widely inland – while exposed coasts and hills could be hit by 70mph gales.

That warning expires at midnight tomorrow night, before another one kicks in for the full 24 hours of Sunday which covers the whole of Britain and warns of winds gusting at up to 80mph across the country.

People have been warned to stay away from seafronts because of high waves. Some damage to property is anticipated, especially tiles being blown off roofs, while power cuts are also likely.

Widespread disruption to transport is expected, with roads and bridges closed and flights cancelled. Ferry operator CalMac has warned of likely ‘weather-related’ disruption across all its 28 West Coast routes in Scotland.

Wind remains a problem on Monday but it is the additional threat from heavy snow which has prompted yet another yellow warning, between midnight on Sunday and noon on Tuesday. 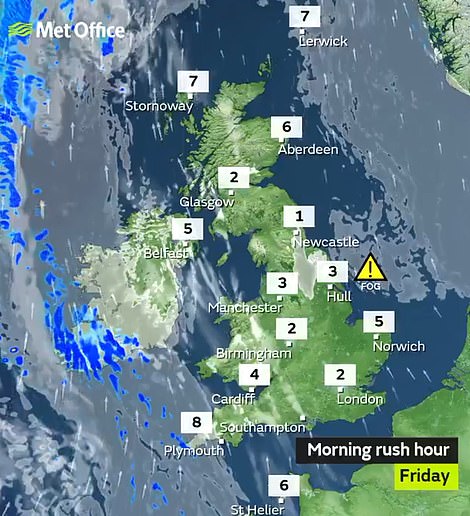 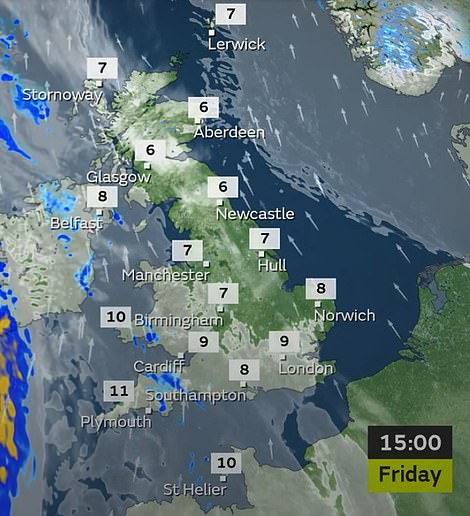 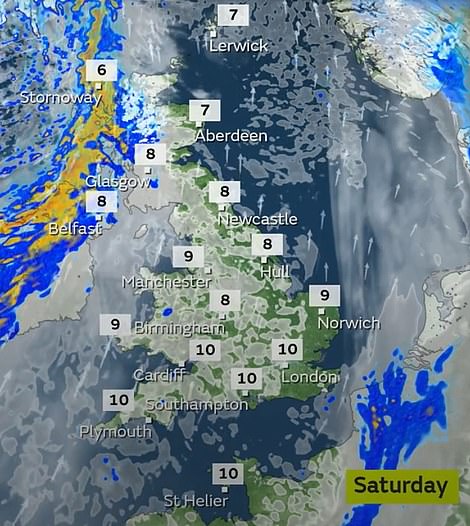 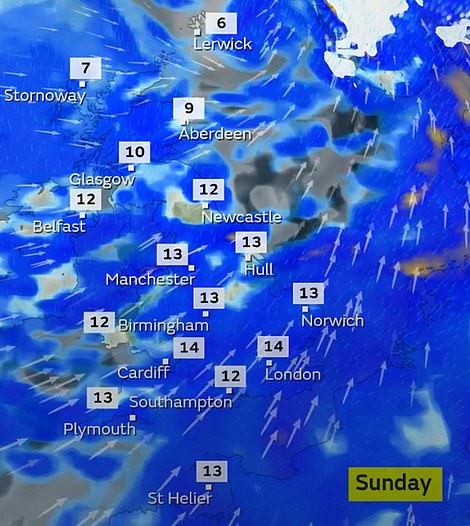 Areas above 490ft (150m) can expect up to an inch of snow, rising to four inches above 980ft (300m). The Met Office has also forecast lightning strikes, blizzards and ‘considerable drifting of lying snow’. 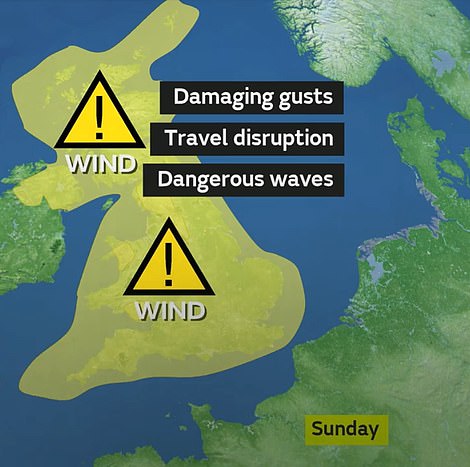 Met Office forecaster Oli Claydon said: ‘We expect disruption to last well into next week. Friday is the last day of pleasant weather.

‘Things will take quite a dramatic turn on Saturday, when we see the start of atrocious conditions. The country will experience the full range of winter weather it hasn’t seen for some time.’

Looking further ahead, Chief meteorologist Frank Saunders added: ‘In the wake of Storm Ciara, it’ll remain unsettled and very windy across the UK and it’ll turn colder with wintry showers and ice an additional hazard, as we head into the new week.’

CalMac director of operations, Robert Morrison, said: ‘Weather for the weekend is looking extremely problematic as far as delivering a scheduled timetable. There is a very high possibility of weather-related disruption to services across all 28 of our routes.’

A Scottish Rugby spokesman said: ‘Scottish Rugby is looking forward to welcoming fans to the international matches being held this weekend. As part of our usual preparations we are closely monitoring weather forecasts in light of potential adverse conditions.’ 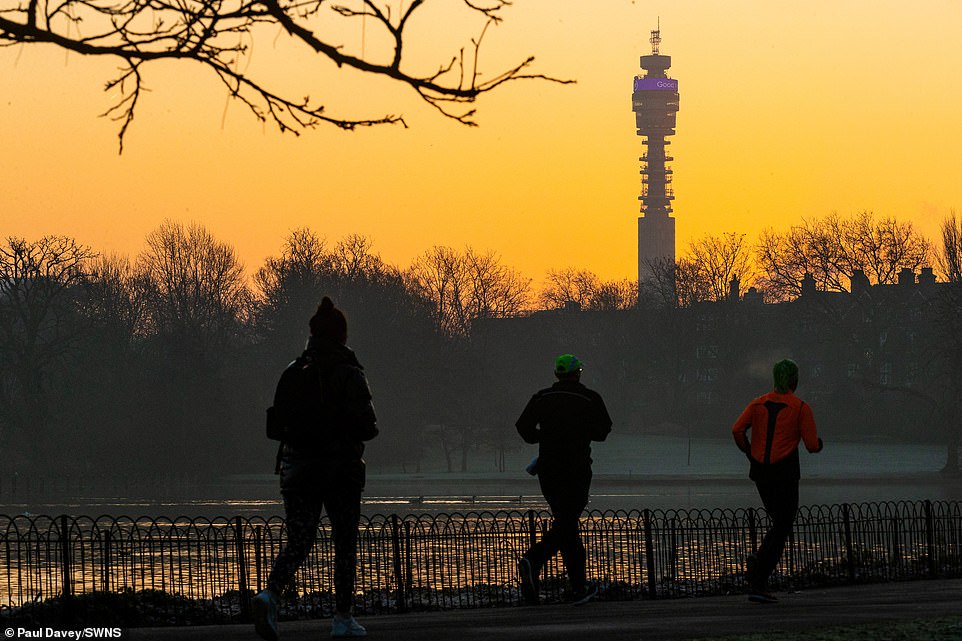 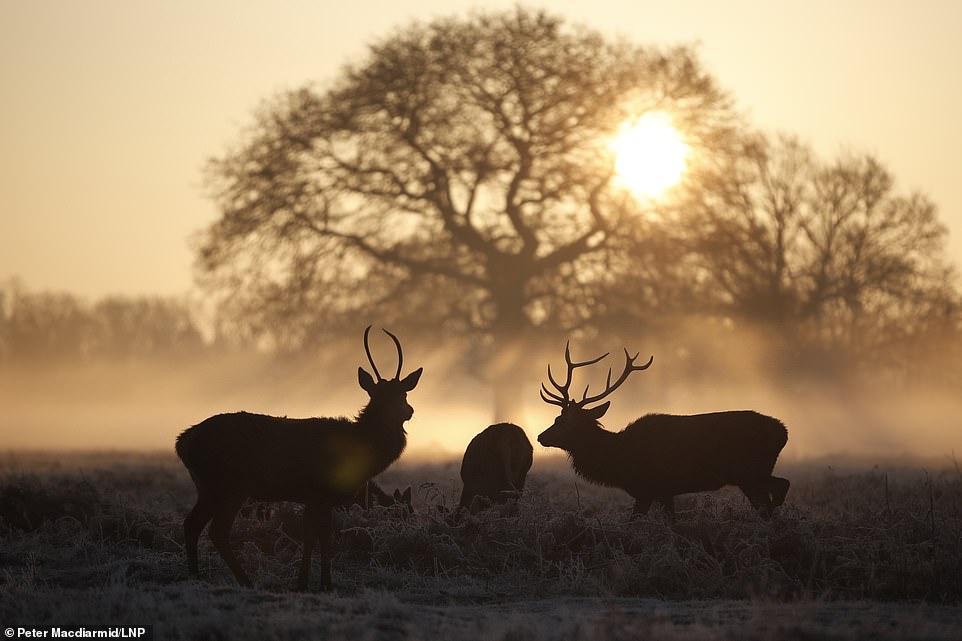 Deer graze at first light this morning on the grass at Bushy Park in Richmond, South West London 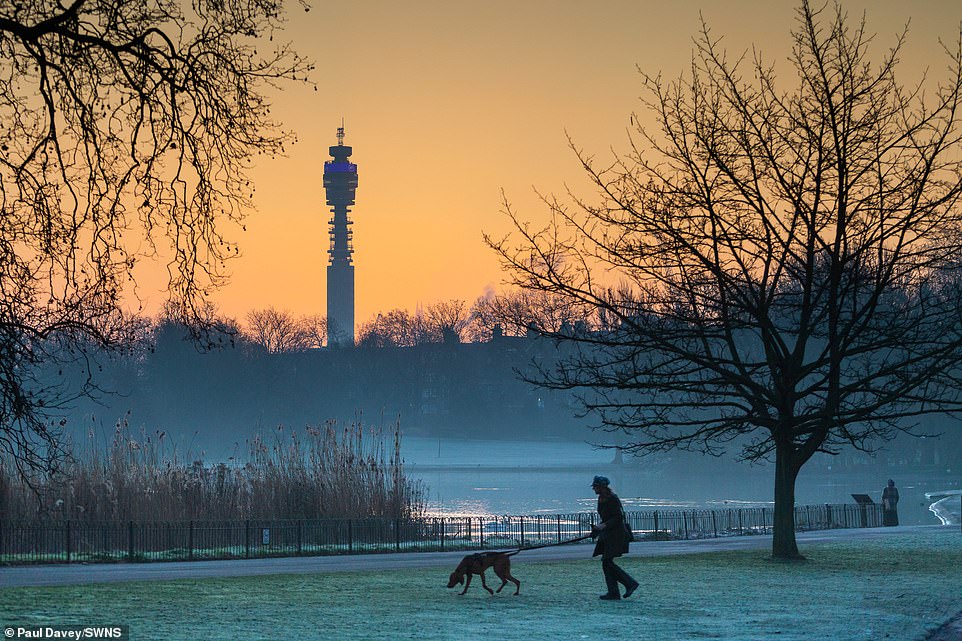 Guy Addington, Regional Water Safety Lead at the RNLI said: ‘This rough weather could making visiting our coasts around the UK and Ireland treacherous and bring very dangerous sea conditions.

‘Sadly, around 150 people accidentally lose their lives around UK and Irish waters each year and over half of these people didn’t plan on ever entering the water. Slips, trips and falls can be a major factor in these kinds of incidents.

‘If you see someone else in danger in the water, call 999 and ask for the Coastguard. If you have something that floats that they can hold on to, throw it to them. Don’t go in the water yourself – too many people drown trying to save others.’

And Ben Aldous, RAC patrol of the year, said: ‘Drivers will need to take extreme care with the strong winds forecast for this weekend, especially on coastal or exposed routes. Combine the strength of the wind with heavy showers, and you have a recipe for some treacherous driving conditions.

‘We strongly recommend drivers reduce their speed and leave plenty of space between their vehicle and those around them, and be particular careful when passing high-sided vehicles when the potential for strong cross-winds could blow them off course. Drivers in rural areas should be particularly cautious of falling debris.’

Hardy Norfolk terriers Ruby and Dora were captured with their fur fluttering heavily as strong gusts swept through.

The scale of the winds caught their owner Sara Gedye, 64, of Shaldon, Devon, by surprise. She said: ‘They are so comical. We adopted them about eight years ago when they were three and a half.

‘We walk on this beach in Teignmouth quite a bit as it is very dog friendly. But there was a hell of a wind. It felt like a sand storm. I have never felt anything like it, their fur was blowing everywhere.

‘But we just weren’t expecting anything like that. I love the film Titanic and the ‘flying’ scene is such a classic one that everyone knows. I think they were trying to recreate that.

Ms Gedye, a full-time carer, said she was surprised by the reaction to her photo. She added: ‘I have never had such a response to a picture. A lot of people commented and said it really made their day.

‘I am flattered as they bring me joy every day and it is nice to share that. Ruby is definitely playing the role of Jack as she is a bit of a tomboy. There is another picture where it looks like one has gone overboard – and she is saying ‘Come back Jack.’ It was a bit of fun and I am happy that it made people smile.’ 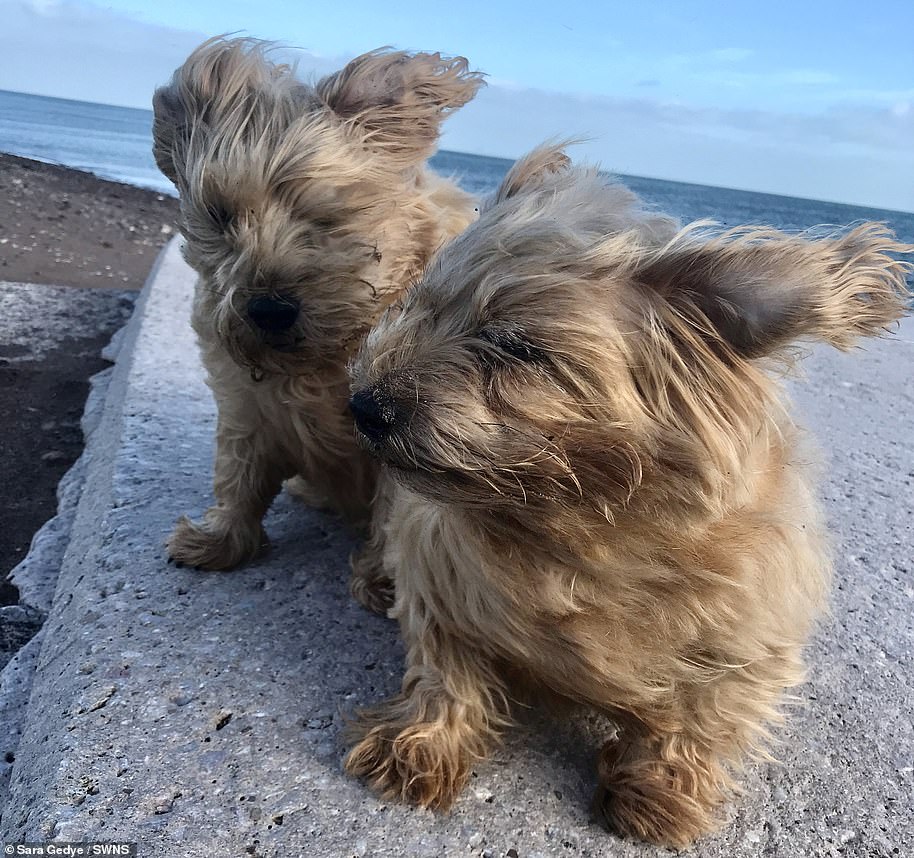 Hardy Norfolk terriers Ruby and Dora were captured with their fur fluttering heavily as strong gusts swept through in Shaldon, Devon