Mourners in black and red with Jack Daniels and Rolex floral tributes pay respects to My Big Fat Gypsy Wedding suicide pact twins Billy and Joe Smith, 32, at funeral to strains of He Ain’t Heavy, He’s My Brother

Mourners turned out in their hundreds for the funerals of twin brothers and stars of My Big Fat Gypsy Wedding Billy and Joe Smith who killed themselves just after Christmas.

The twins, 32, were found hanging side by side from trees near their homes in Sevenoaks, Kent, on December 28 last year.

They left a suicide note for their grandmother, who later revealed Joe had battled cancer and the pair both became depressed as they struggled to cope with his diagnosis.

Today they are being laid to rest at Sevenoaks Cemetery in Kent following an emotional procession through the town and a funeral service at St John the Baptist Church.

Friends and family met at their grandmother Phoebe’s home in Sevenoaks this morning, carrying ornate floral tributes in the shape of a bottle of Jack Daniels, Jose Cuervo tequila and a Rolex watch, before following the cortege to the church.

Funeral-goers were dressed in black and red and welcomed into the church to the sounds of ‘He Ain’t Heavy, He’s My Brother’ by The Hollies before an introduction from Father Robin.

After the service, the coffins were returned to their separate white horse-drawn carriages to be taken to Greatness Park Cemetery, where friends and relatives held a private burial.

Mourners have turned out in their hundreds for the funerals of twin brothers and stars of My Big Fat Gypsy Wedding Billy and Joe Smith, in Sevenoaks, Kent, who killed themselves just after Christmas 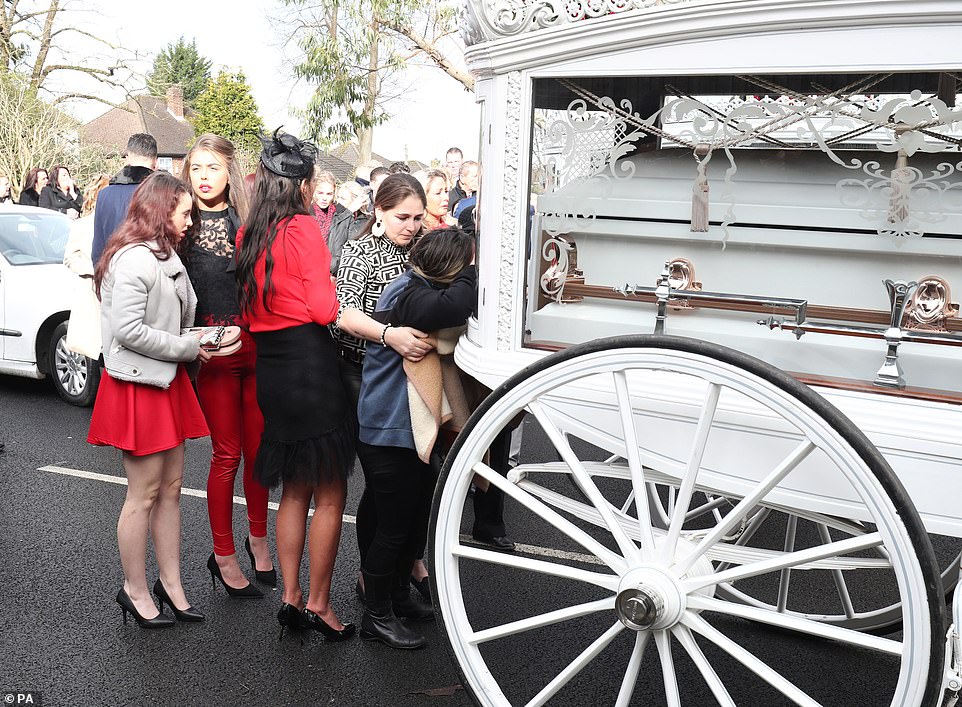 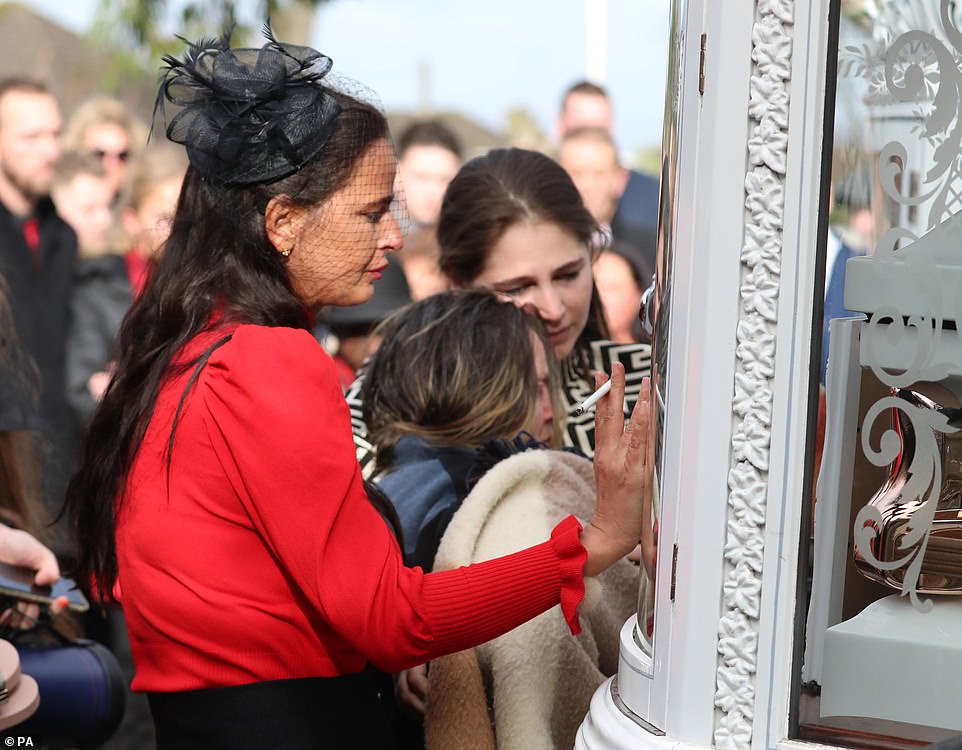 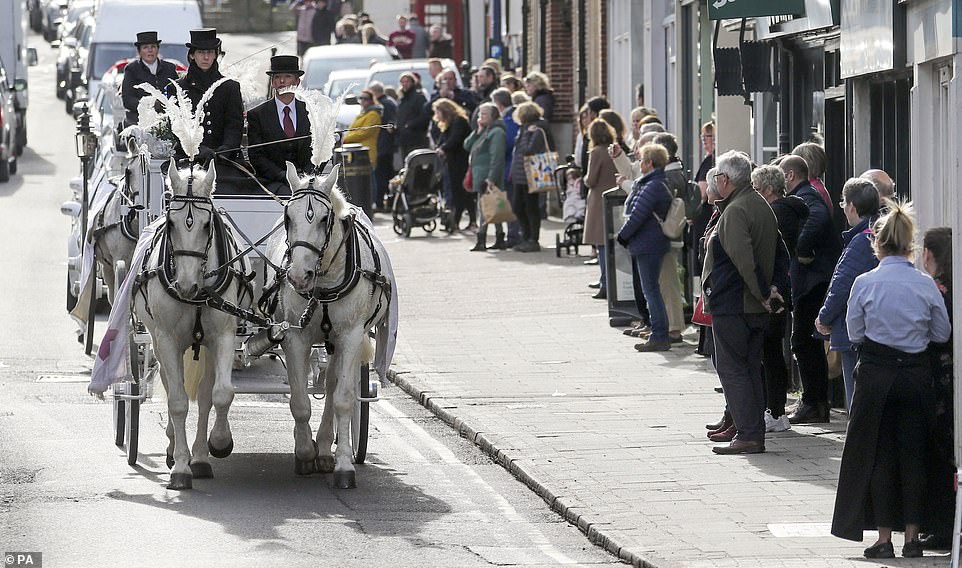 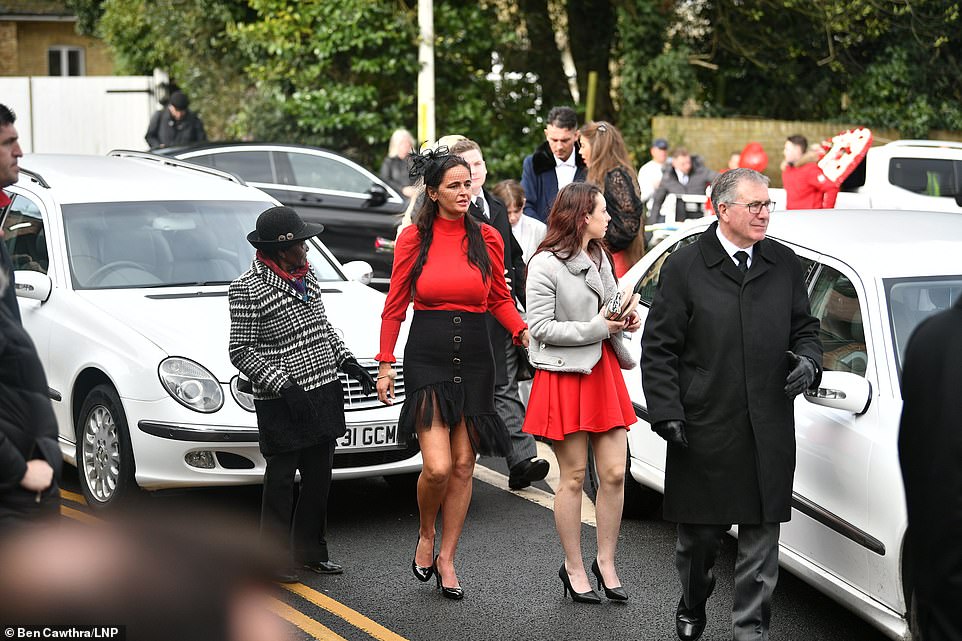 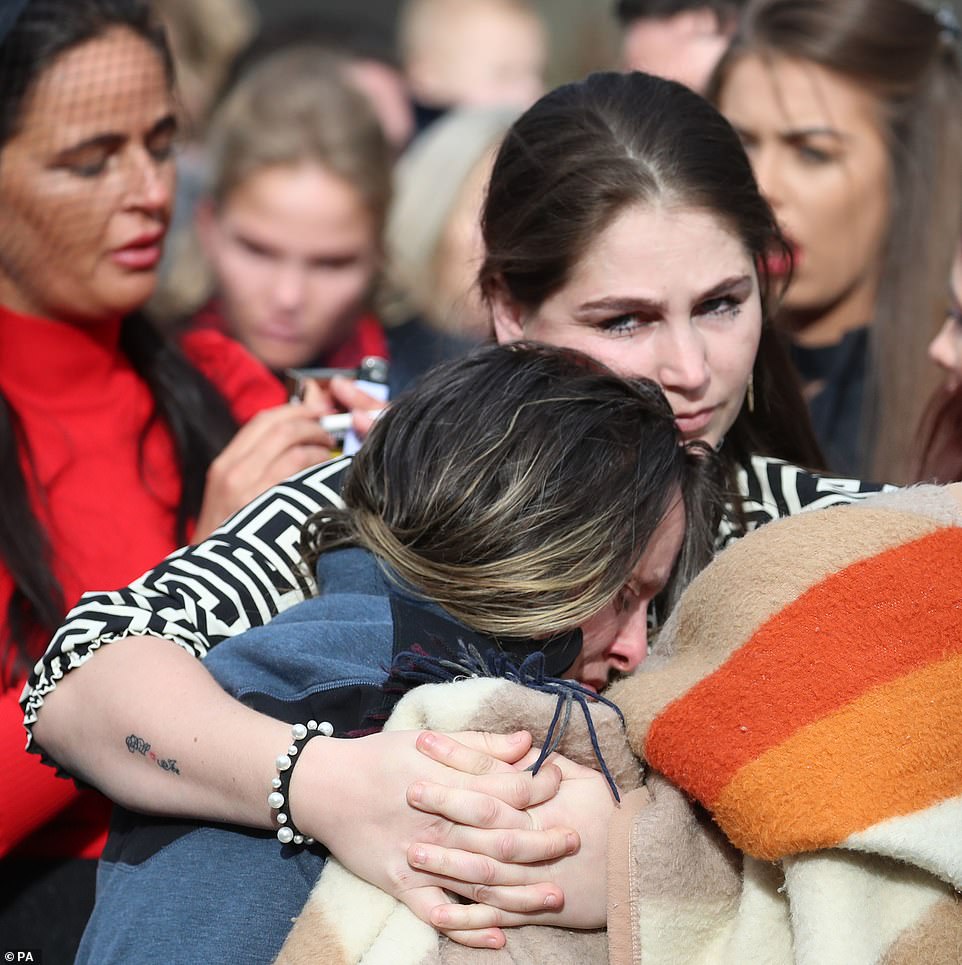 A woman is seen in tears as she waits to go into the funeral service for Billy and Joe Smith, 32, of Sevenoaks, Kent 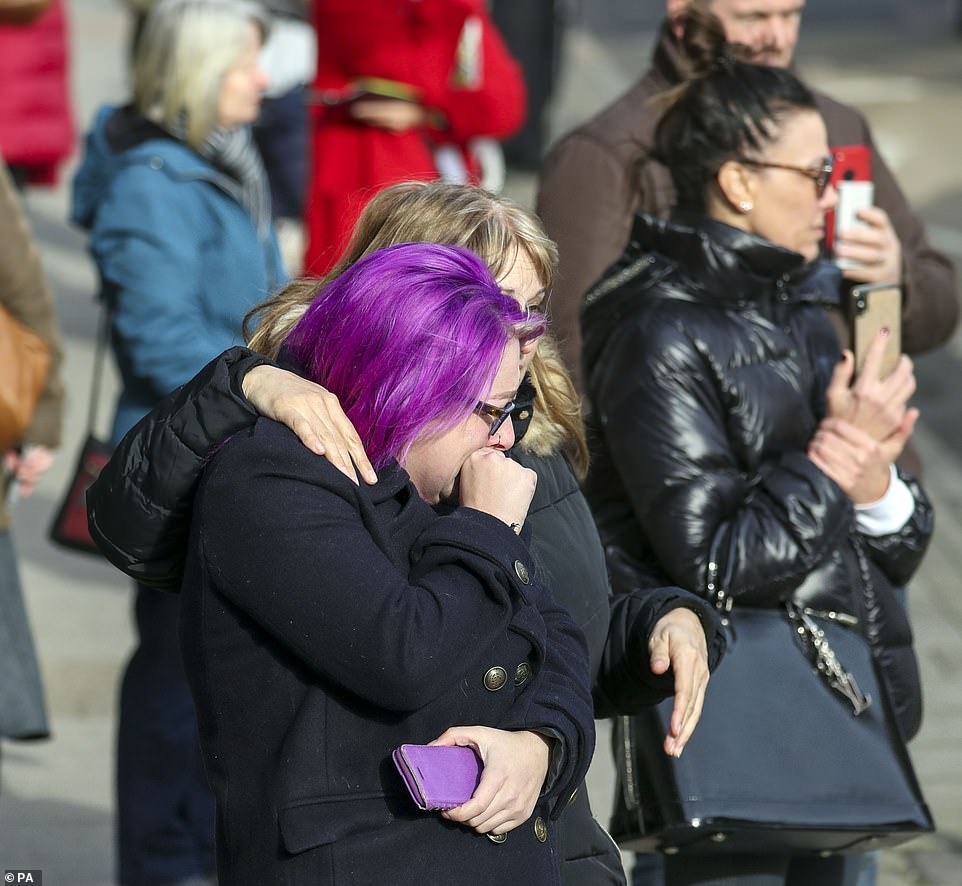 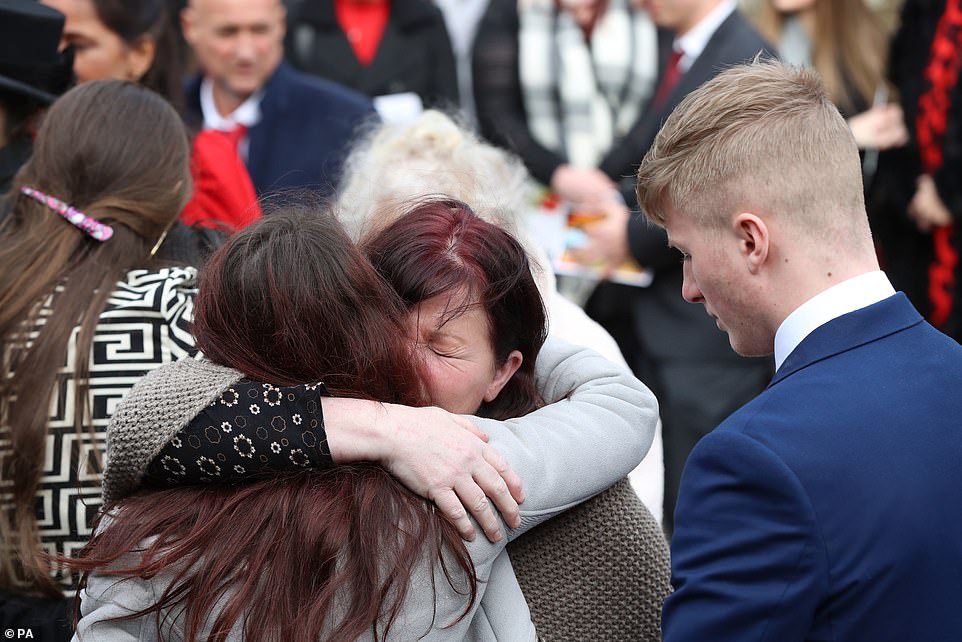 Overcome with grief, mourners are pictured embracing one another outside the church in Kent this morning 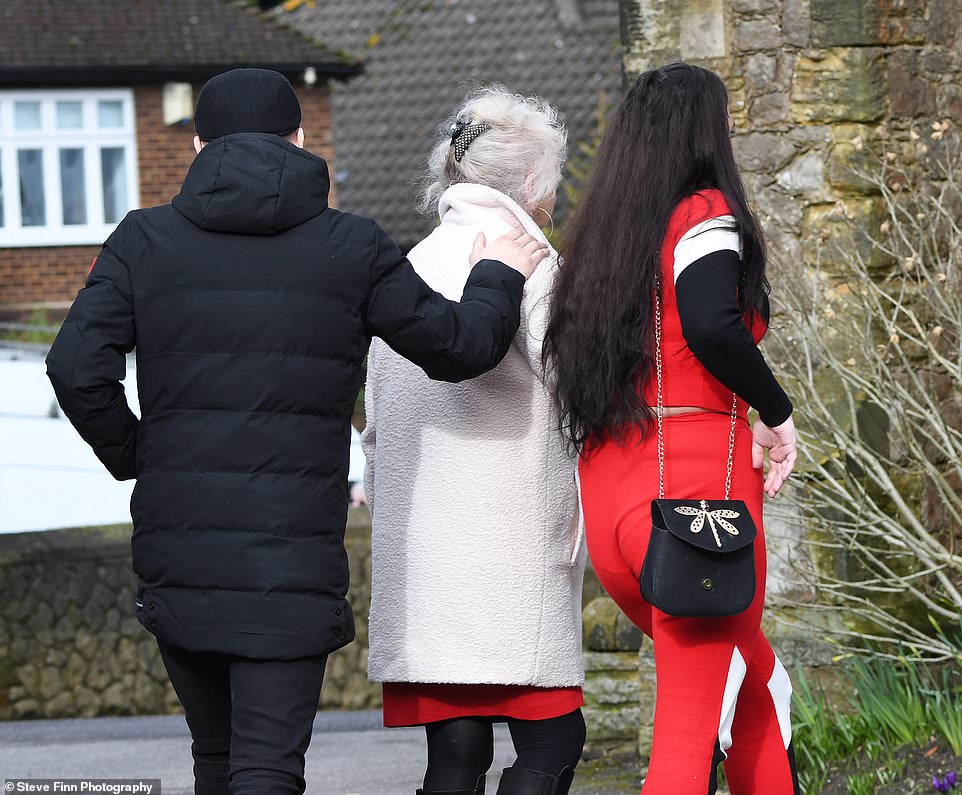 Mourners dressed in red and black to attend the service, which began to the sounds of ‘He Ain’t Heavy, He’s My Brother’ by The Hollies 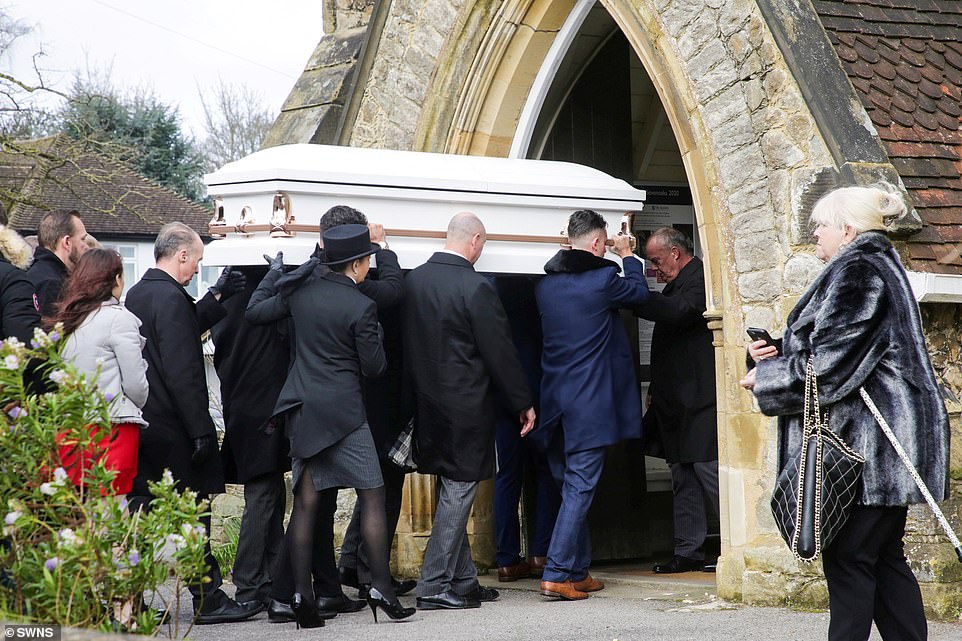 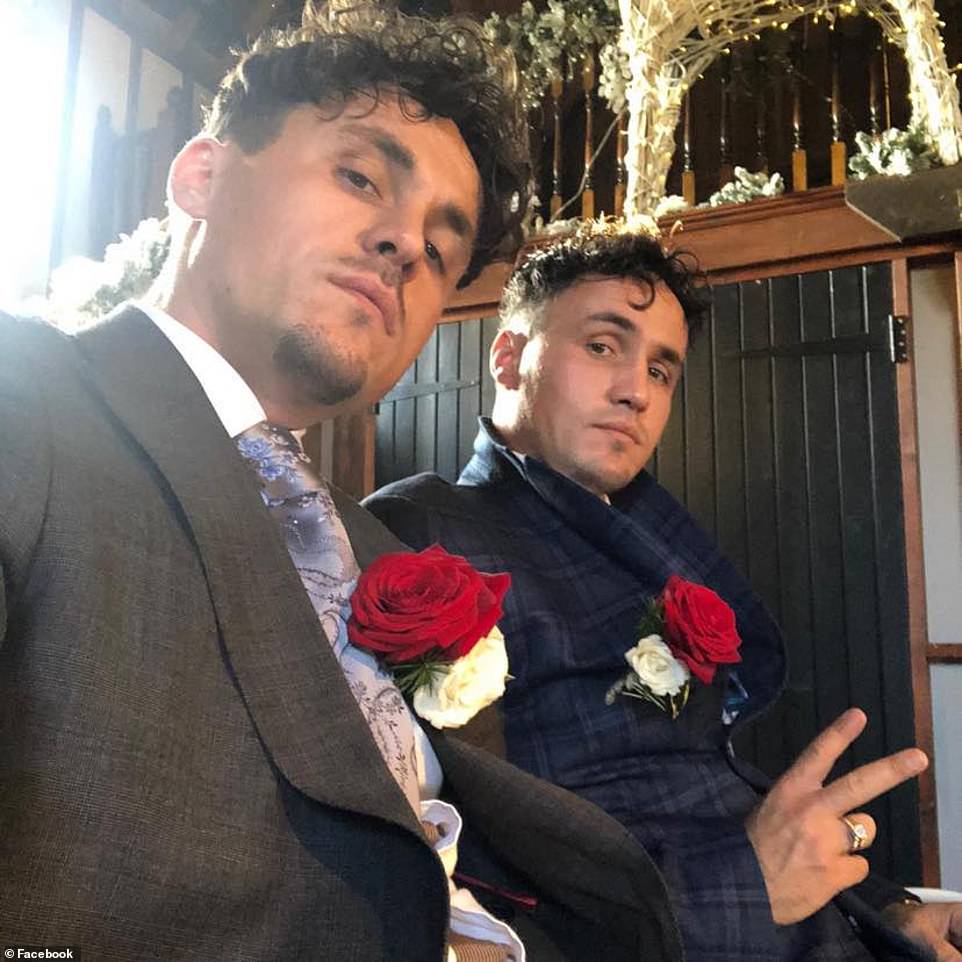 Billy and Joe Smith, 32, were found hanging side by side in a wooded area near their homes in Sevenoaks, Kent, on December 28 last year

UB40’s ‘Many Rivers To Cross’ then rang through the aisles as per the brothers’ request before Father Robin’s opening prayer.

A letter they wrote before they died was read by a woman named Sarah.

One tribute included a poem which read: ‘Billy and Joey, my babies, you are so very special and we’re so from the start. I held you in my arms and deeply in my heart.

‘And like two single drops of rain that on still waters fall, your lives did ripples make, you touched the hearts of all.

‘You have now gone to play, with angels in the heaven up above. We will keep your special memories and treasure them with love.

‘Although, my darling babies, you were with us just a while, you will live in our hearts forever, with your remembered smiles.

‘My Lord, please hold them in your arms, and treasure them with care. Make up for all they suffered, and all they had to bear.

‘Please whisper in their ears, in case they didn’t hear, how much we truly love them, and wish they still were here.’

Friends of the twins then read a poem for them that ended ’till we meet again, rest in paradise, boys.’

Hymns also included ‘Allelujah, Worthy Is The Lamb For You Are Holy’, ‘Peace Like A River, Love Like A Mountain’ and ‘Let My Living Water Flow Over My Soul.’

Other songs played at the service were Gill Diamond’s ‘You’ll Never Walk Alone’ and Mariah Carey’s ‘One Sweet Day’ dedicated to Joe by his estranged wife Charmaine. 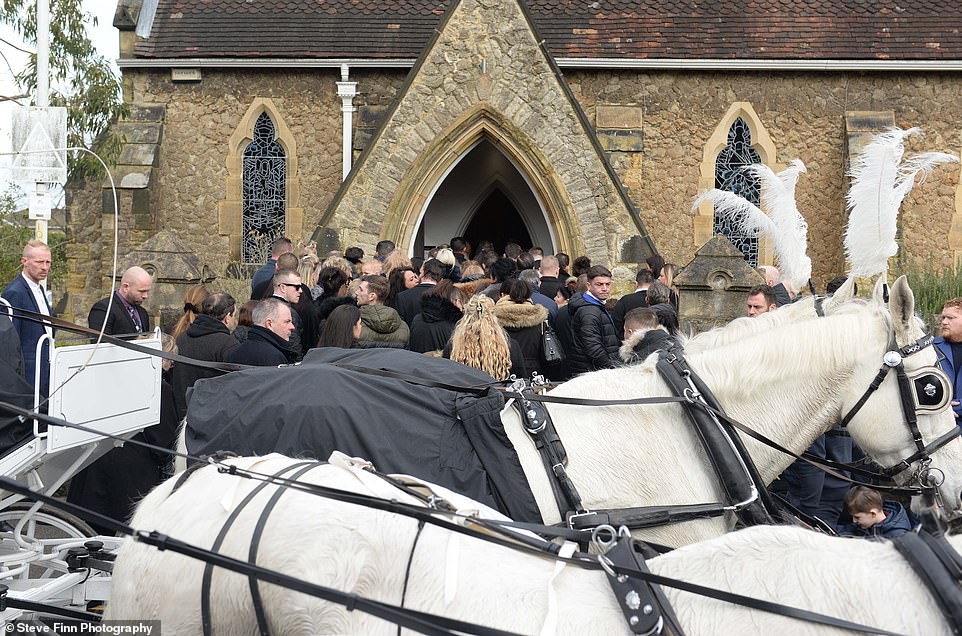 The grounds of St John the Baptist Church in Sevenoaks, Kent is pictured crowded with friends, family and other members of the travelling community before the funerals began 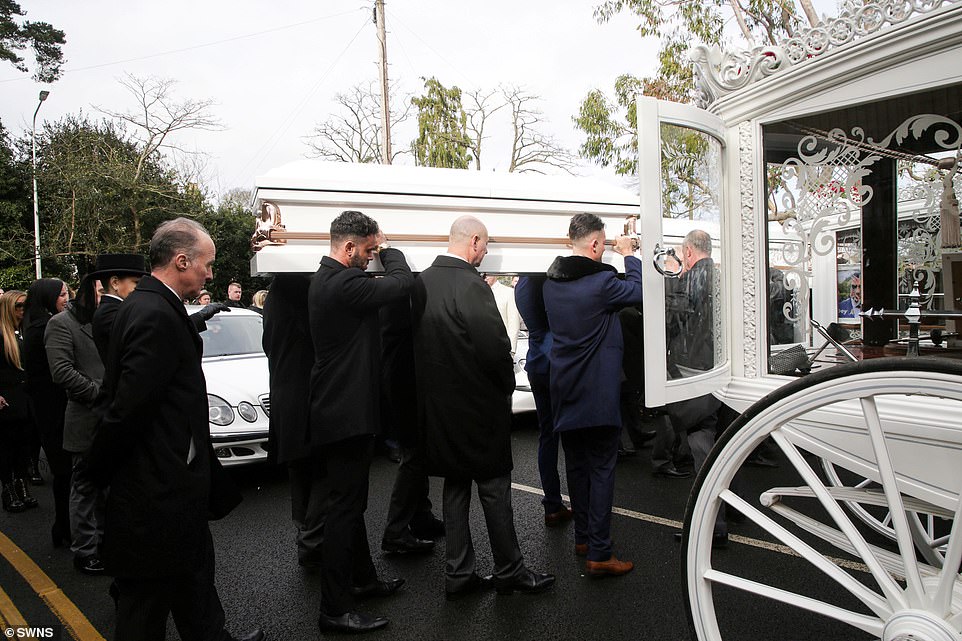 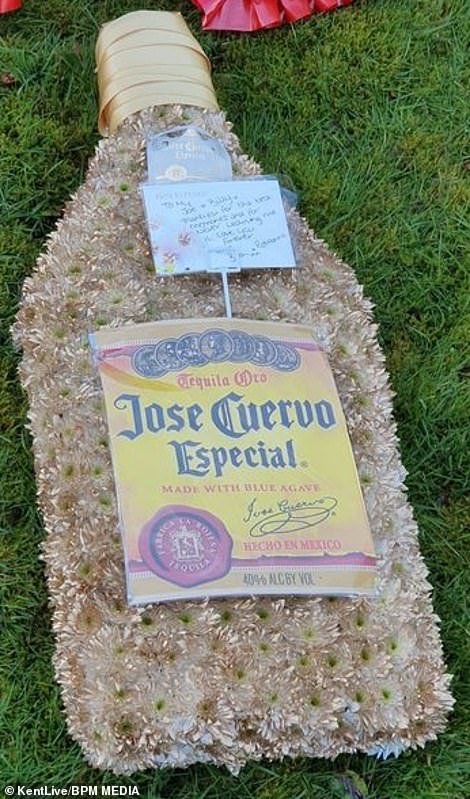 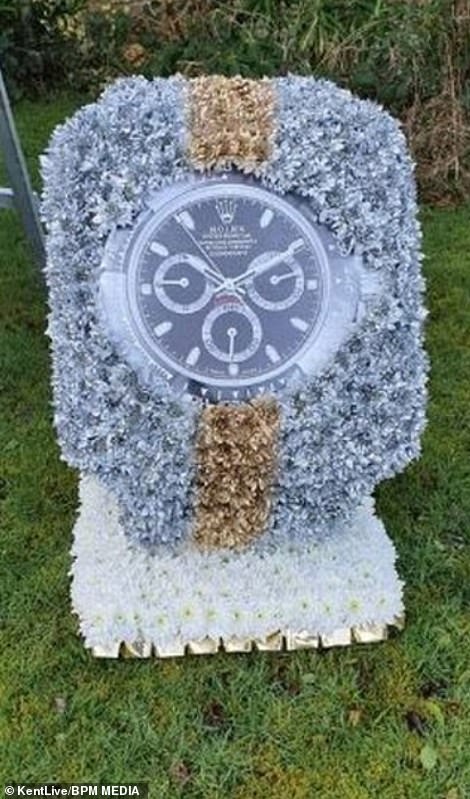 Friends, family and other members of the travelling community met at their grandmother Phoebe’s home in Sevenoaks this morning, carrying ornate floral tributes in the shape of a bottle of Jack Daniels and a Rolex watch, before following the funeral cortege to the church 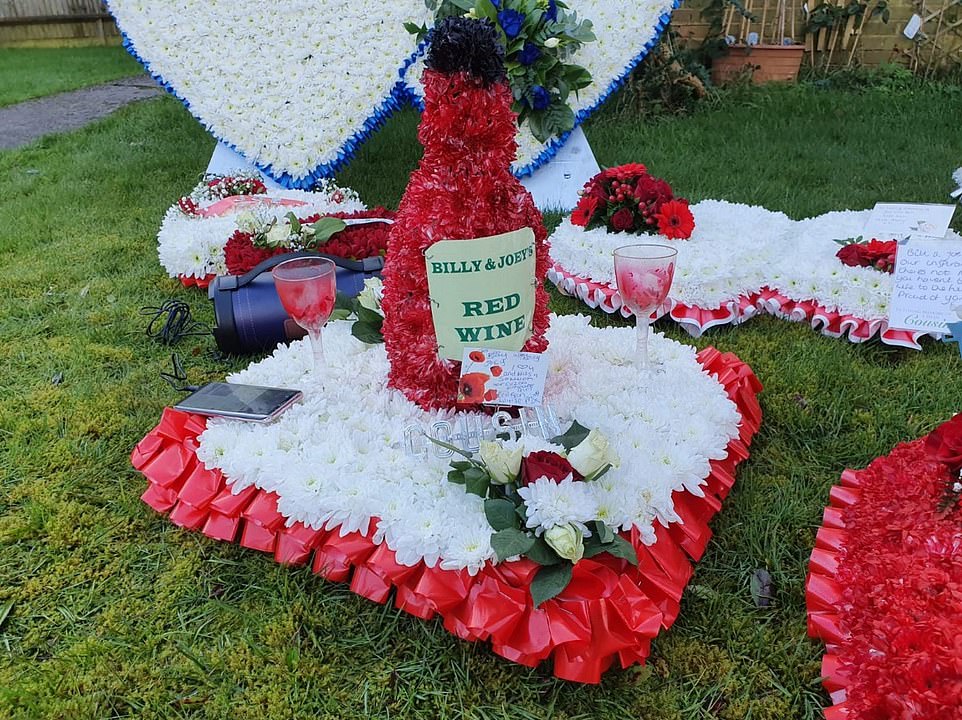 One set of flowers was in the shape of ‘Billy and Joe’s red wine’ with the word ‘cousin’ and two glasses on it, while two made up silver and gold Rolex watches 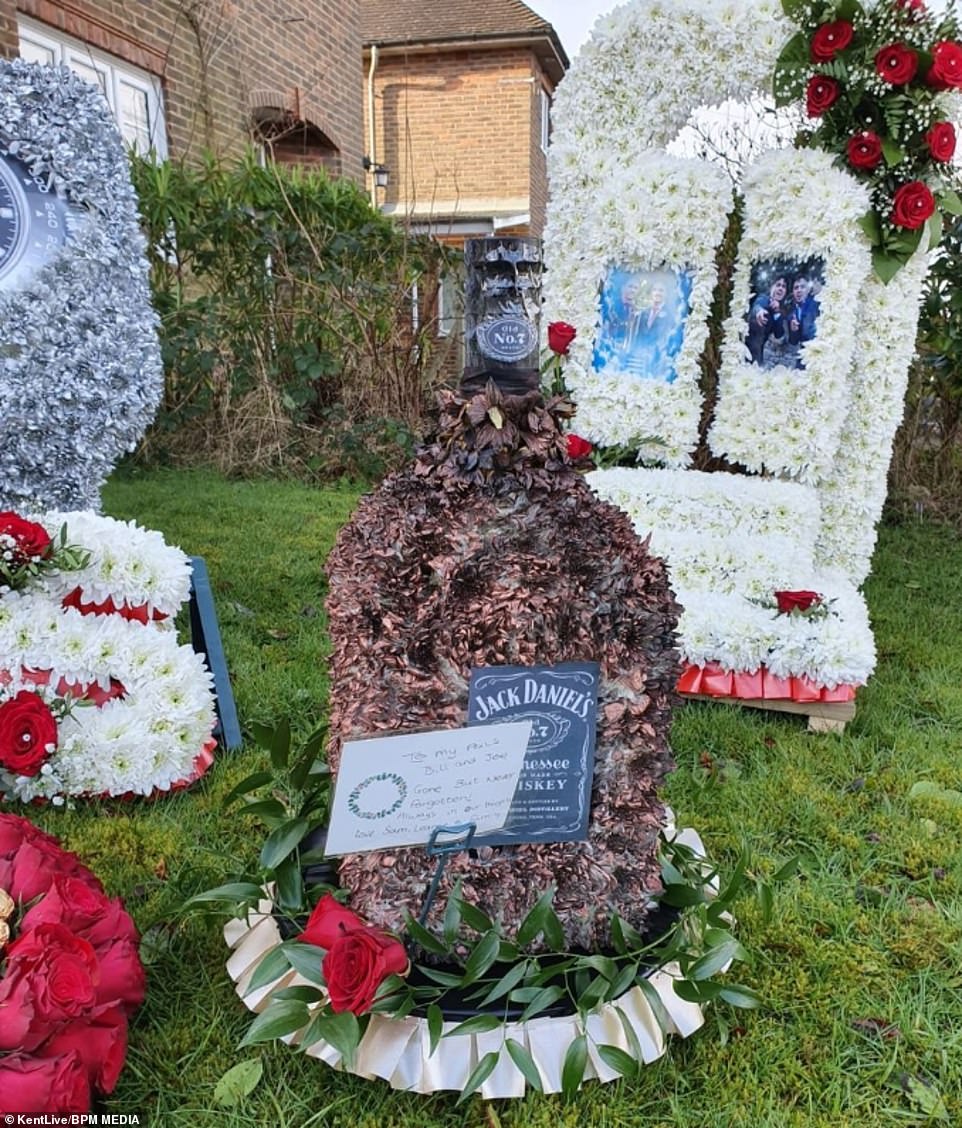 One of the floral tributes was in the shape of a bottle of Jack Daniel’s whiskey, with a note that reads: ‘To my pals Bill and Joe, Gone but never forgotten’ 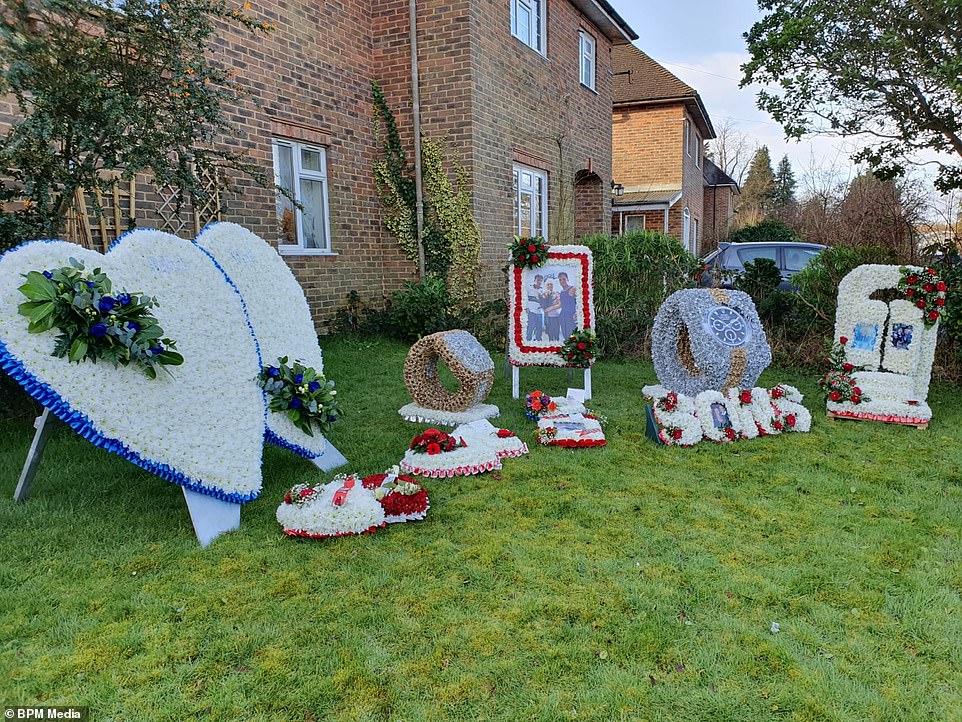 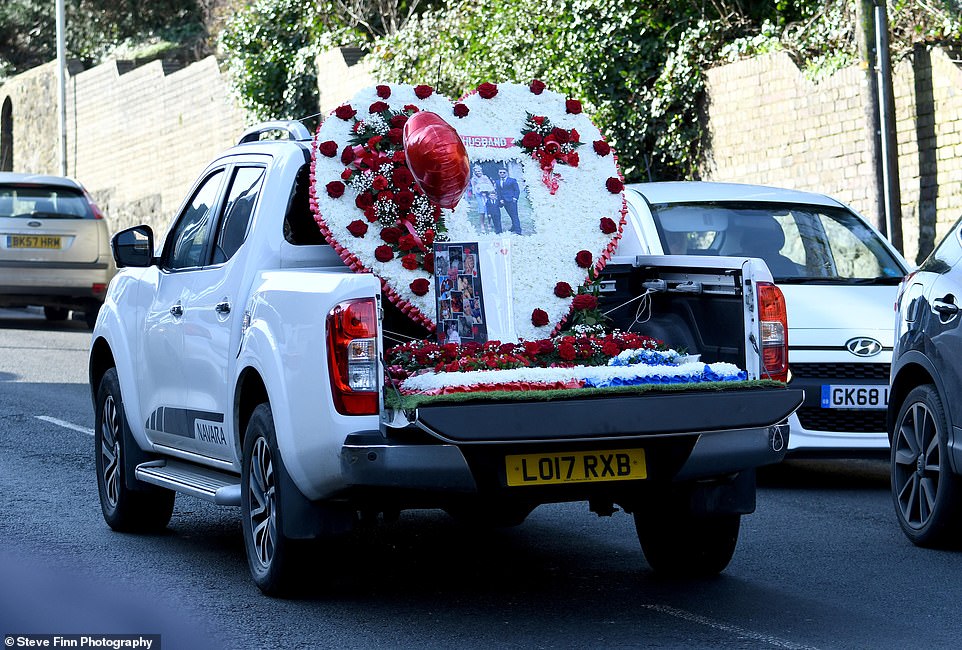 A pick-up truck joined the funeral procession covered in red, white and blue floral tributes to Joe, with the word  ‘husband’ and a picture of him, his estranged wife Charmaine, and two children 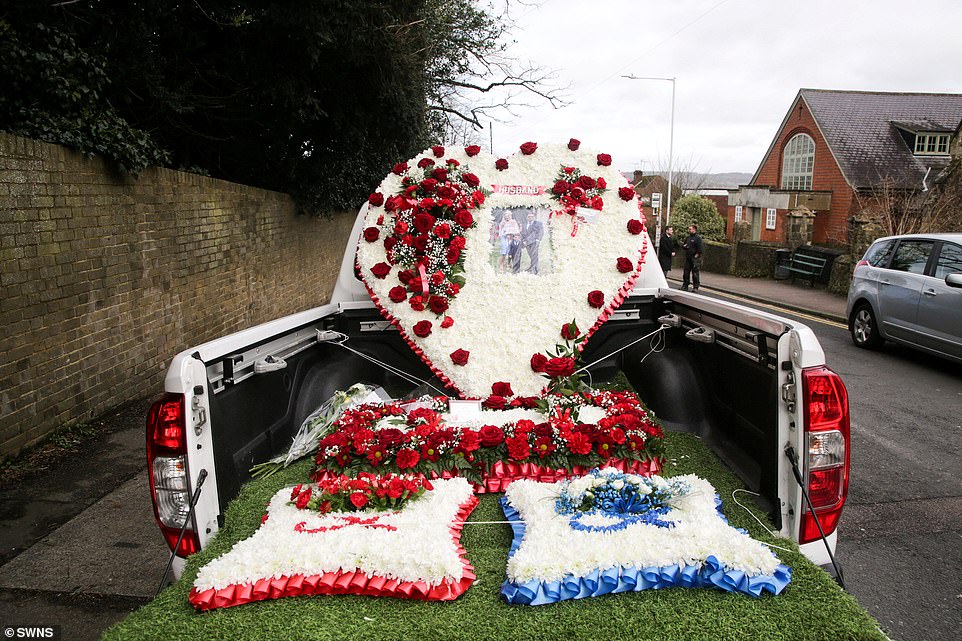 The pick-up truck was covered in huge white, red and blue floral tributes to the two men 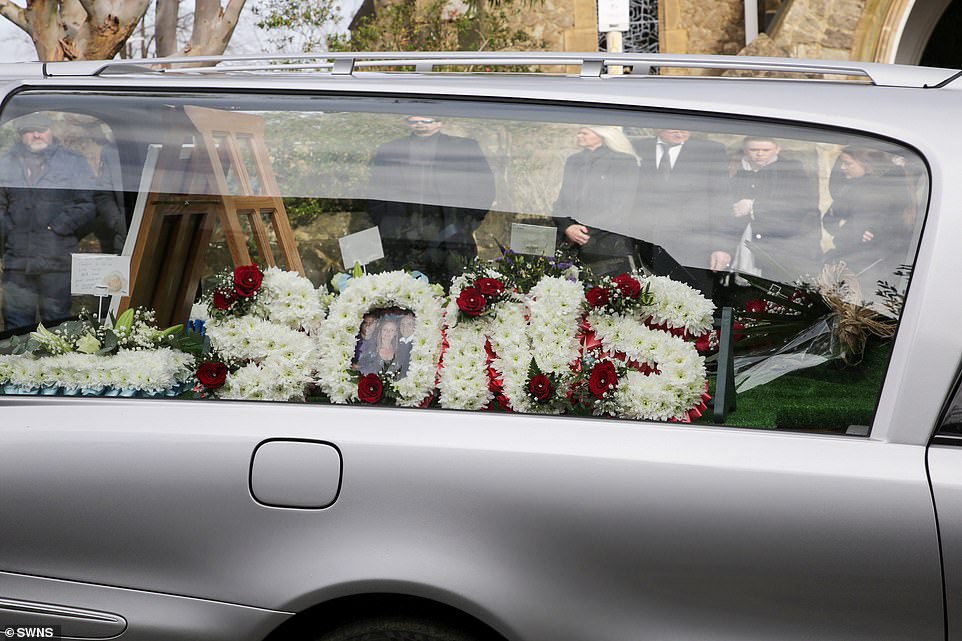 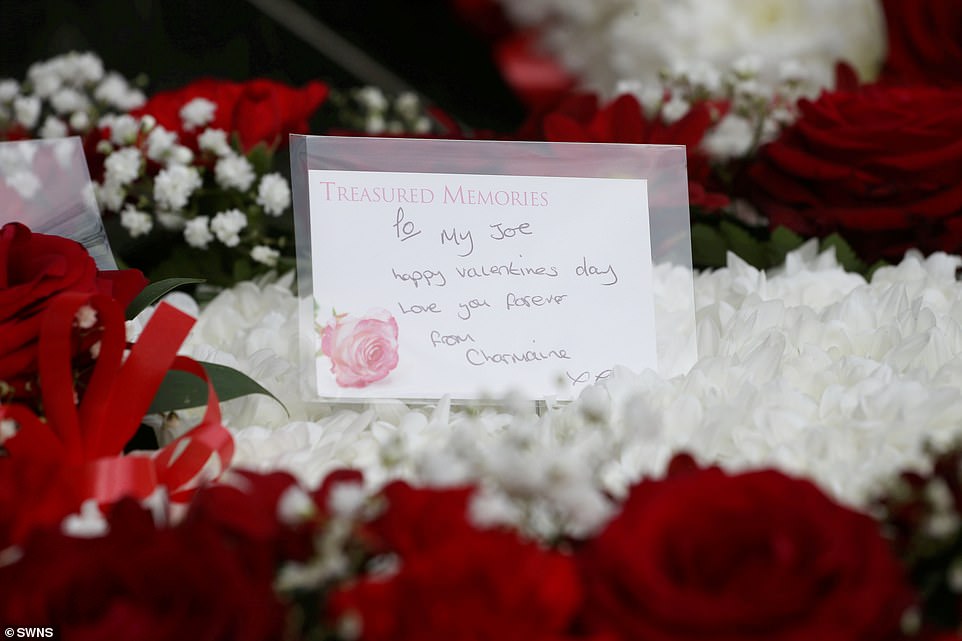 She then read a tribute to Joe in two halves, separated by Toy Story’s ‘You’ve Got A Friend In Me’ from their son Joseph to ‘Daddy and Uncle Bill.’

‘Daddy’s Little Girl’ by the Shires was also played on behalf of his daughter Savannah Rose.

Mourners heard the Lord’s Prayer and scriptures were read by pastor Ben Cooper before the end of the service.

In keeping with Valentine’s Day, dozens of Ferrero Rocher chocolates filled a heart of roses on the lawn outside. A picture of the twins made up the letter ‘O’ in the word ‘Sons’.

Billy and Joe’s favourite songs were playing on a speaker while mourners gathered to admire the tributes.

Red heart balloons tied to the garden fence read ‘I love you’ and ‘We will always belong together’.

One note on the Jack Daniel’s floral tribute said: ‘To my pals Bill and Joe. Gone but never forgotten. Always in our thoughts.’

Another note on a similar Jose Cuervo Especial tequila bottle floral tribute read: ‘To my Joe and Billy. Thank you for the best memories and never leaving me. I’ll love you forever.’

One of the other tributes said: ‘To Kent’s biggest two legends. I will miss you both very much. Until we meet again boys.’ 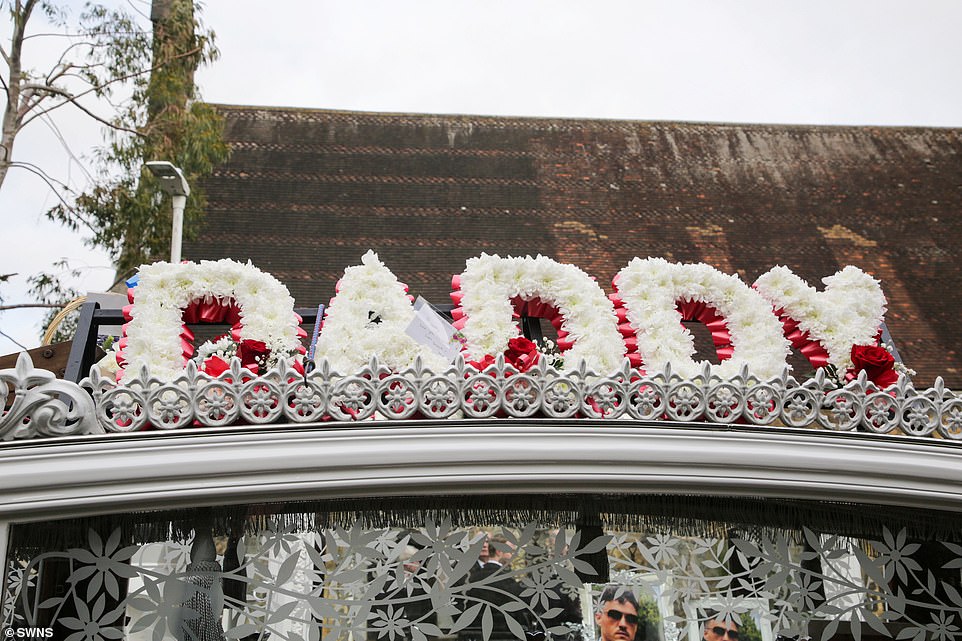 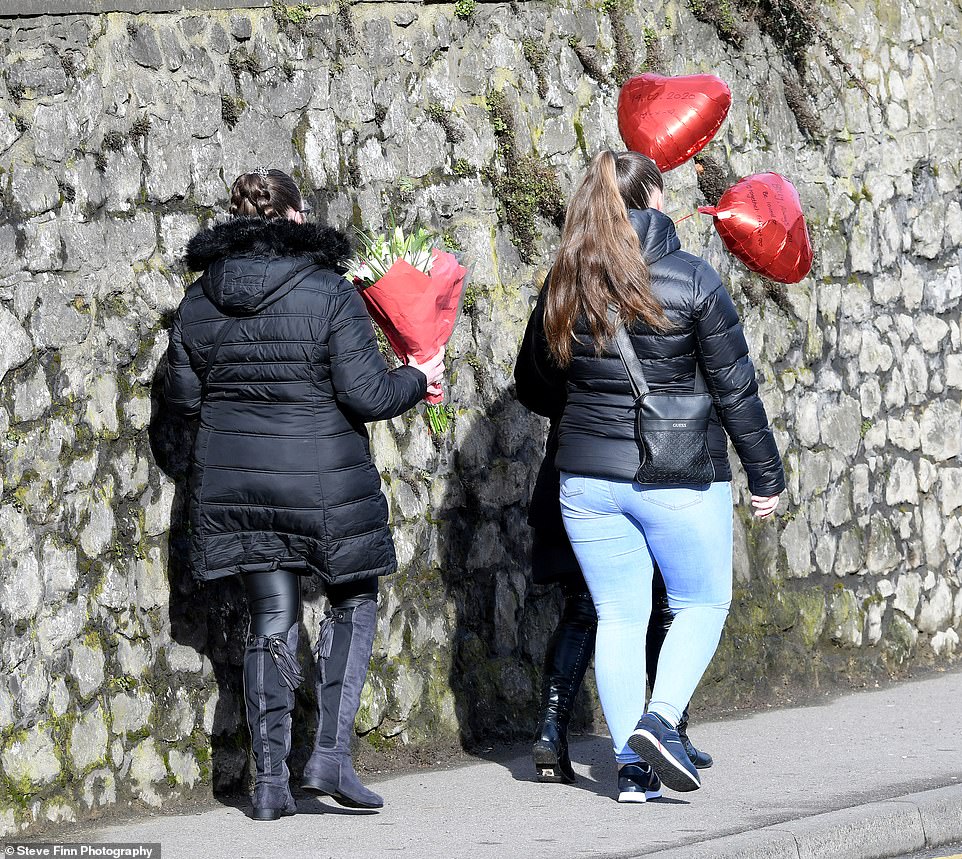 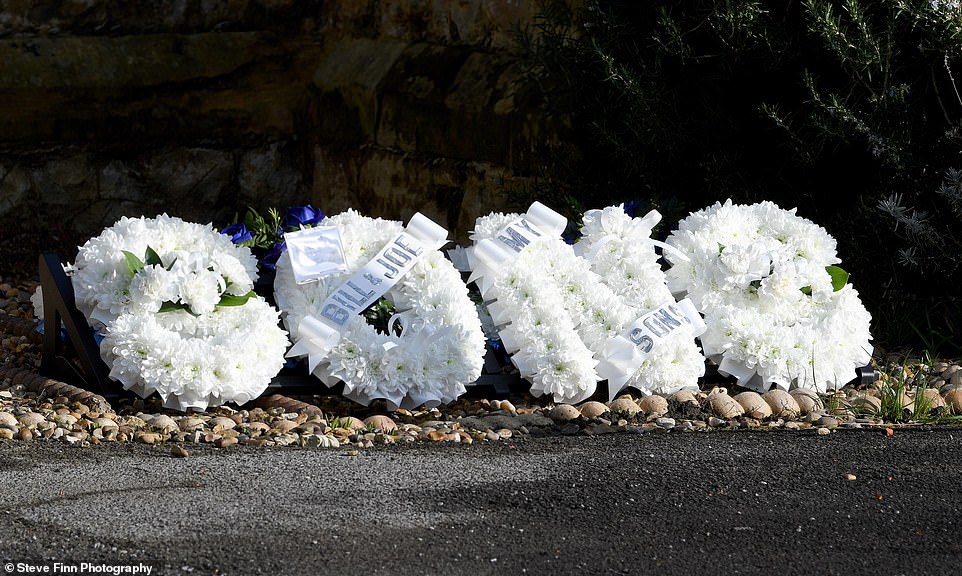 Floral tributes are pictured on the edge of the road where a funeral procession took place in Sevenoaks, Kent this morning 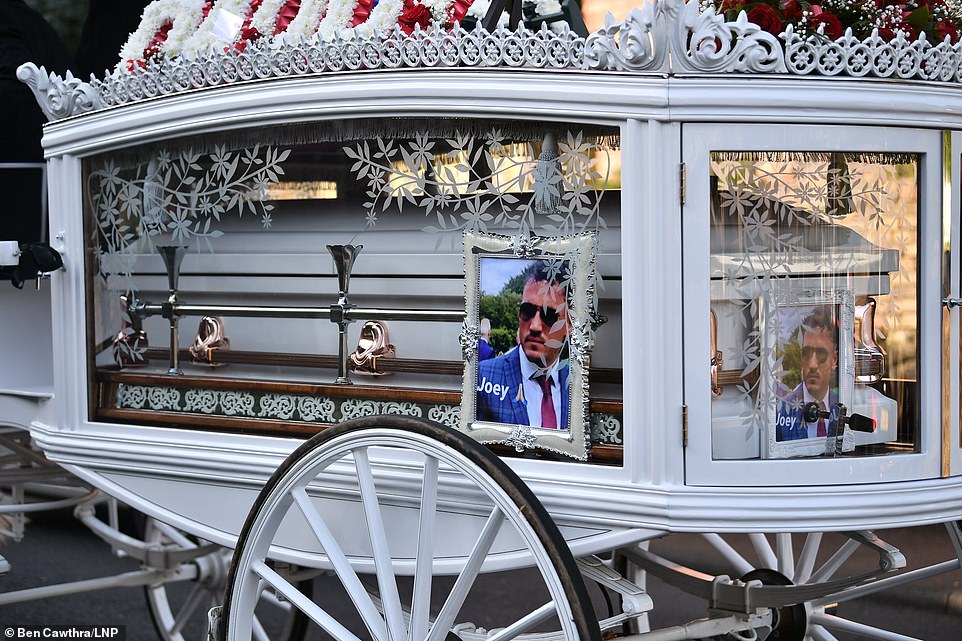 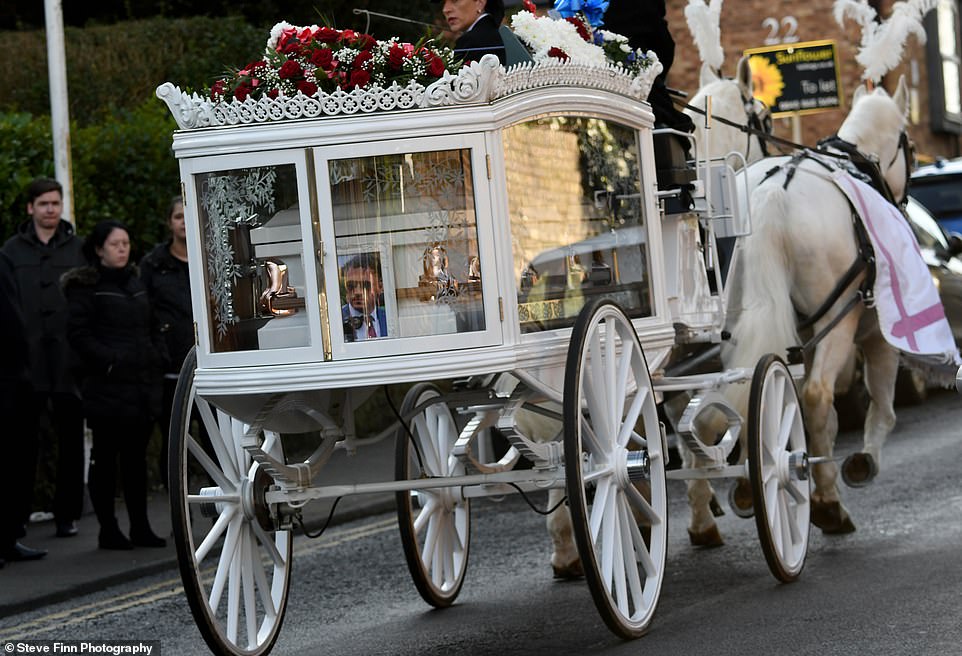 Two separate white horse-drawn carriages carried the coffins of the boys to outside their grandmother’s house.

A pair of white horses with white feathered plumes on their heads pulled them along as mourners wept on the sidelines.

Joe, who was born first, was in the first carriage while Billy followed behind in the second carriage.

A separate silver hearse carried a number of floral tributes as passers by watched on and stood to pay their respects.

The procession, followed by multiple white cars to take the family to the church, waited in the road as tearful mourners kissed the windows of the carriages saying ‘I love you Bill’ and ‘I love you Joe’. 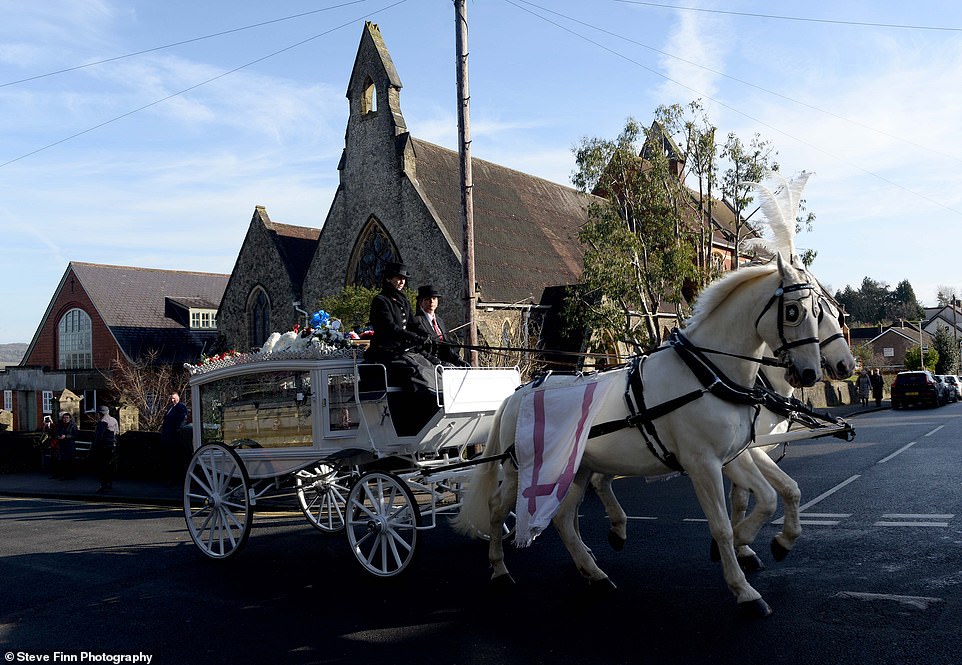 The funeral service is taking place at St John the Baptist Church in Sevenoaks this morning. A white funeral carriage pulled by two white horses is seen outside draped with the St George’s flag 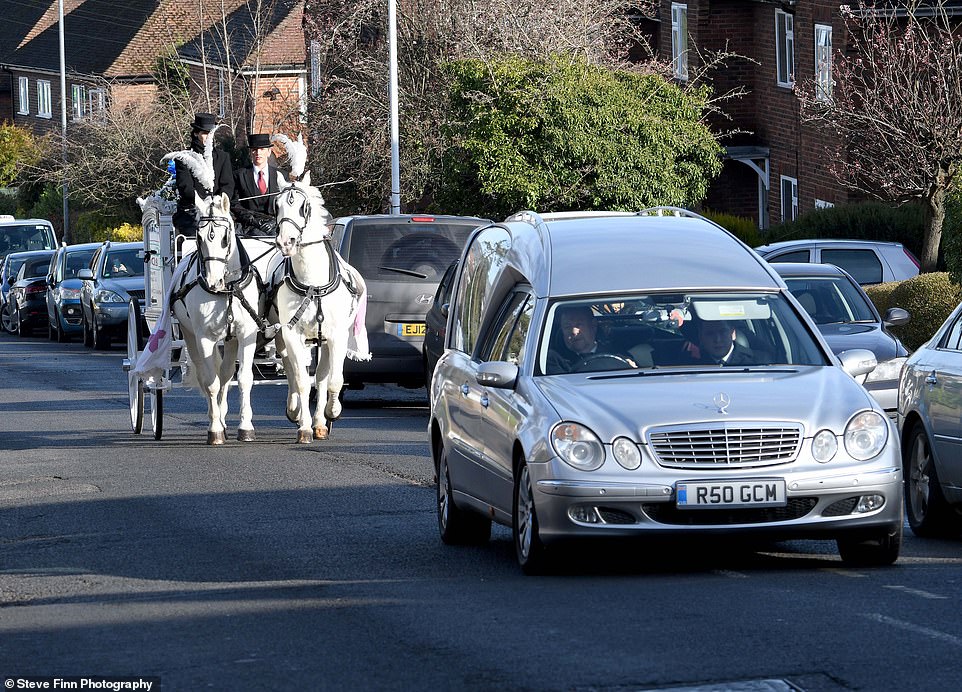 A funeral hearse is pictured travelling through Sevenoaks, Kent, where the brothers lived before they were found hanging from trees near their homes three days after Christmas last year 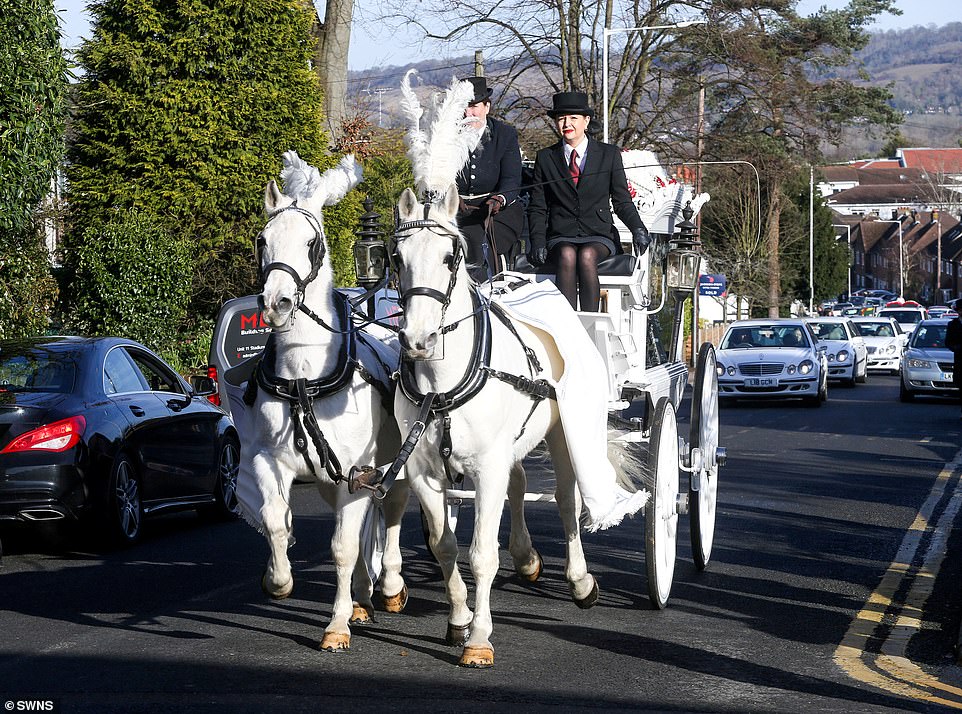 The carriage carrying Joe had the word ‘Daddy’ in white flowers on its roof while Billy had ‘Uncle’ on top of his.

Pictures of the twins were displayed on each side of the carriages, which were driven by people dressed all in black, to show family and friends who was in each one.

A police officer directed around 30 cars out of the residential street towards Sevenoaks town centre.

Billy and Joe starred in the hit Channel 4 show My Big Fat Gypsy Wedding in 2013.

A bitter row broke out over where they should be buried after Joey’s estranged wife Charmaine insisted he should be laid to rest in Essex where they married seven years ago and lived before their separation.

The Smiths’ grandmother Phoebe, 75, and the rest of the family argued they should be together in Sevenoaks, where they lived and grew up. 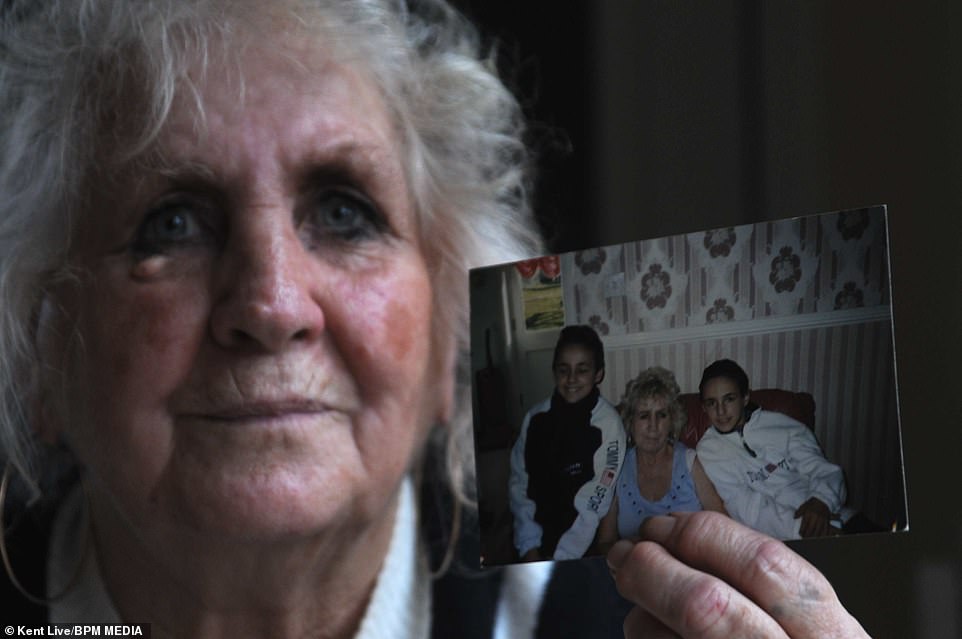 They left a suicide note for their grandmother Phoebe Smith, 75, (pictured holding a picture of the three of them) who later revealed Joe had battled cancer and the pair both became depressed as they struggled to cope with his diagnosis

Woman swept away by floods is feared to be FIFTH person killed by Storm Dennis while water-ravaged Britons brace for MORE misery today with...
Read more
News Stories

BEIJING (AP) — China said Monday it may postpone its annual congress in March, its biggest political meeting of the year, as the military...
Read more
News Stories

JACKSON, Miss. (AP) — With the waters in the Pearl River continuing to rise in and around Mississippi’s capital city and more rain on...
Read more

DOMINIC LAWSON: Why I long to sack Hermes, the uncontactable internet delivery firm that NEVER turns up By Dominic Lawson for the Daily Mail ...
Read more

EXCLUSIVE: 'My son and the other Love Islanders CAN'T know what's happened': Mother of Chad Uzok says show must go on - and ITV...
Read more

BEIJING (AP) — China said Monday it may postpone its annual congress in March, its biggest political meeting of the year, as the military...
Read more
- Advertisement -