DOMINIC LAWSON: Why I long to sack Hermes, the uncontactable internet delivery firm that NEVER turns up

By Dominic Lawson for the Daily Mail

Every year my sister gives me the same birthday present. Sorry, that’s not fair: Nigella gives me a jumper, but each year it is one of a different colour.

Actually, I find this rather exciting, because after so many birthdays I am increasingly intrigued as to what shade I will get, marvelling at my sister’s ability never to repeat one she’d chosen during decades of jumper-giving.

On my latest birthday, however, no jumper — of any colour — arrived.

Instead, and over the preceding few days, I received text messages from a company called Hermes, telling me it would be delivering the parcel from the clothing retailer Uniqlo (which I knew was from my sister). For several days in a row I would be told the thing was arriving that very morning or afternoon. But it never did.

No reason was ever given. When it finally did show up, my birthday had long passed.

Parcels are seen scattered across the floor in the Hermes depot in Bradford, West Yorkshire, in December

Well, this is no disaster, and I like the latest jumper (honey brown) in my now vast collection as much as if it had actually got to me in time for my birthday. My wife, however, has been less fortunate.

Over recent weeks she has had a series of non-deliveries from the same firm, of goods she has ordered via Amazon or directly from companies such as Clarks (boots for our younger daughter, also a present).

My wife, having received a text message saying, ‘Your parcel is now with your local Hermes courier’ would some hours later get another one announcing that it had been delivered ‘and posted through your letter box’.

Whenever this happened, it was puzzling, on two counts. First, the parcel had not been delivered to us. Second, we do not have a letter box. But Hermes had a response (in its texts and emails) to our doubts.

Its messages included a space where, it claimed, would be a photo taken by its courier of our front door, the package safely delivered. So my wife would click on this — to see only a square of perfect blackness. No evidence of a delivery, in other words, or, indeed, of a photo. 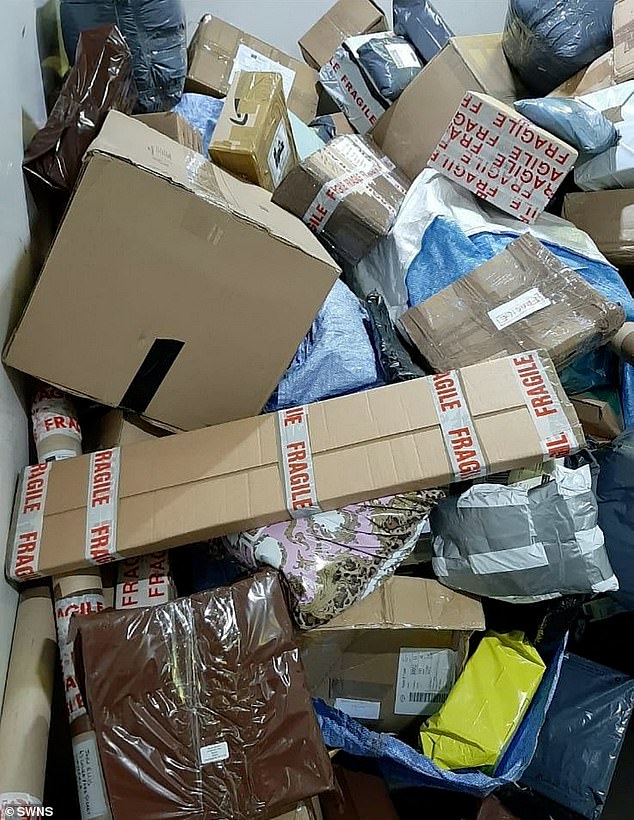 In the latest independent survey I’ve seen (of 9,000 users), out of all the nationwide delivery firms in the UK, Hermes came 14th out of the 17 ‘best and worst’ listed. Pictured: Packages piled up at the Bradford Hermes depot

This bizarre process has occurred several times with this firm, most recently with some specialised automatic cameras my wife had ordered. They were designed to capture the images of any creatures roaming outside our house at night, though, as I pointed out later, they would also be useful in capturing the image of a lost Hermes courier.

But, like the Clarks boots, the cameras didn’t come, even though yet another text and email from Hermes assured us that the delivery had been completed (with the usual unsubstantiated claim to have attached a picture of the job done, as proof of fulfilment).

Now, you will — if naïve in such matters — be asking: why not just reply to the text and email, telling Hermes that its claims to have successfully delivered were false?

The answer, of course, is that these messages do not accept direct replies. And do not imagine that there is a telephone number that you can ring, to speak to any human working for Hermes. No such interaction is possible.

Instead, all you get is an automatic message telling you to contact the original supplier of the goods — as if it were entirely their fault that the objects of your desire have not arrived.

In fact, the suppliers in all cases have refunded my wife, with apologies. So, again, hardly a disaster. 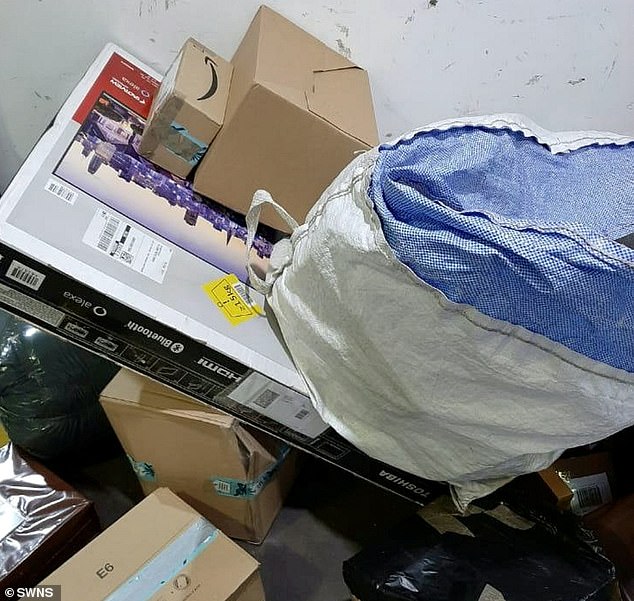 A TV box and parcels are stacked in a corner at the Bradford Hermes depot. It turns out that Hermes is a German company headquartered in Hamburg

Except that my wife, who is always frantically busy with her charity Team Domenica, and also as a director of a retail business herself, has spent hours in useless dialogue with what seems to be a primitive form of artificial intelligence, only without either intelligence or knowledge. Or indeed anything at all.

So I have tried to acquire a little knowledge of this mysterious business myself. It turns out that Hermes is a German company headquartered in Hamburg, which, by its own account, ‘in 2017 won several awards including the Operational and Compliance Excellence Award at the Motor Transport Awards, the Courier Team of the Year Award from the Institute of Couriers, the award for the Operations (Large) category at the Logistics Awards, and the award for the Customer Experience Champion at the UK Contact Centre Awards’.

That last one in particular made me laugh. And possibly not only me. For in the latest independent survey I’ve seen (of 9,000 users), out of all the nationwide delivery firms in the UK, Hermes came 14th out of the 17 ‘best and worst’ listed. 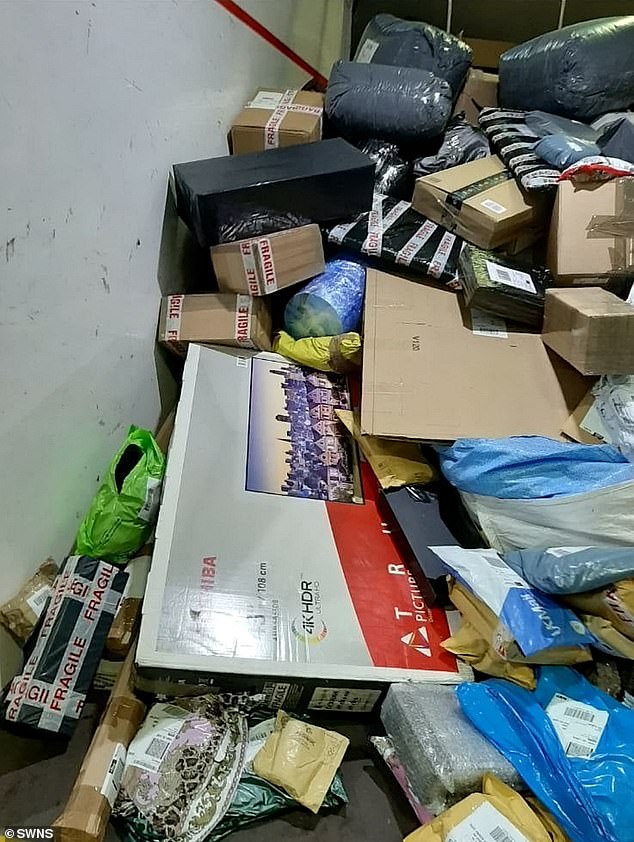 As the compiler of that survey, Steve Nowottny of MoneySavingExpert.com, points out: ‘Having goods delivered to your door should be convenient, but we hear countless horror stories, whether it’s deliveries not showing up, missed delivery cards being left when you were in, or even packages being dumped in the bin.’

And as he also observes: ‘In practice you have little choice over which firm delivers your goods. Generally you have no direct relationship with the delivery firm.’ Ain’t that the truth.

So I can’t sack Hermes (the name of the ancient Greek god of trade, wealth and, er, thieves). But please, Amazon, Uniqlo, Clarks: will you?

Is this the ultimate humiliation for a proud Scottish bank?

The Scottish National Party won’t like this one little bit: the new chief executive of Royal Bank of Scotland, Alison Rose, has decided to change its name to . . . NatWest. West, as in Westminster — the patch of London the SNP holds responsible for all of Scotland’s ills.

What a reversal this is: it was under Fred Goodwin that, in 2000, RBS launched a hostile takeover of the much larger NatWest, buying it for £22 billion. Goodwin — later knighted for services to Scottish banking — let it be known how inferior the management of the London-based bank was, and shareholders went along with it.

The success of that deal led directly to the arrogance that saw Goodwin make possibly the worst acquisition in business history, buying the hopelessly over-extended Dutch bank ABN Amro in 2007: when the credit crunch hit almost immediately afterwards, RBS had to be bailed out by British taxpayers to the tune of £45 billion. We still haven’t got our money back. 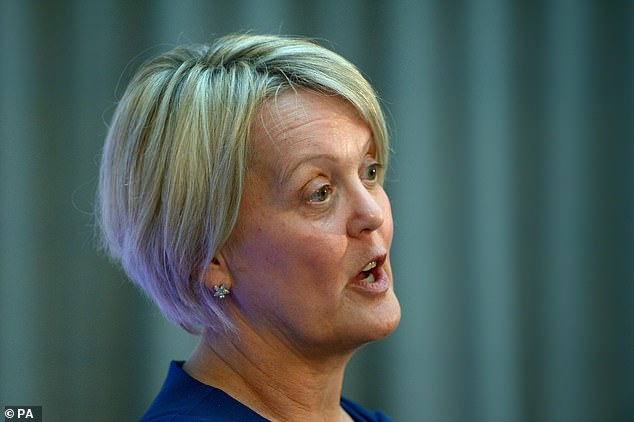 The new chief executive of Royal Bank of Scotland, Alison Rose (pictured at the London headquarters this month) , has decided to change its name to . . . NatWest

It was a shattering blow to then SNP leader Alex Salmond, a former employee of RBS, who had cheered on all of Goodwin’s increasingly megalomaniac acquisitions. Salmond referred to this as Scotland’s ‘arc of prosperity’.

As the former Chancellor of the Exchequer Alistair Darling devastatingly pointed out about Salmond during the Scottish independence referendum of 2014: ‘He endorsed the deal by RBS that led to disaster. The disaster that overtook the bank was made in Edinburgh, not London.’

Nowadays Salmond has more personal concerns on his mind: he is soon to face trial on an attempted rape charge (which he strenuously denies). But RBS is also in the doghouse for what can be described as a ruthlessly exploitative assault on small businesses, many of which it drove to the wall with unscrupulous lending policies.

In other words, the very name RBS has become terminally tainted. No wonder its new boss has decided to ‘rebrand’ (the customary euphemism).

In fact, the RBS name will remain on all its buildings and offices in Scotland. This hasn’t stopped a former SNP MP, Paul Monaghan, protesting that renaming the company NatWest ‘will cost the Royal Bank of Scotland thousands of customers’.

Somehow I don’t think many Scots will close their accounts in protest: they, more than anyone, already know what disgrace and dishonour had befallen the once great name of Royal Bank of Scotland — and who was to blame.